A Ghost Town Wedding With 47 Guests, and Maybe a Few Others

Joelle Lamberton, who grew up in East Calais, Vt., a tiny town north of Montpelier, learned to be comfortable with frigid temperatures, hard physical work, old houses and ghosts.

“I kind of love ghosts,” she said, recalling how her great-grandmother, who lived nearby, often complained that spirits were turning down the heat in her house.

Ms. Lamberton, 29, left Vermont to attend Northeastern, where she graduated in 2012 with a psychology degree, and later earned a master’s degree in occupational therapy from Colorado State University.

By 2015, she was doing her clinical rotation at Children’s Hospital Colorado in Denver and living by herself in Longmont, Colo. “There was a sense of loneliness,” she said. “So in January 2015, I created an OkCupid profile with my friend’s encouragement and a bottle of wine.” 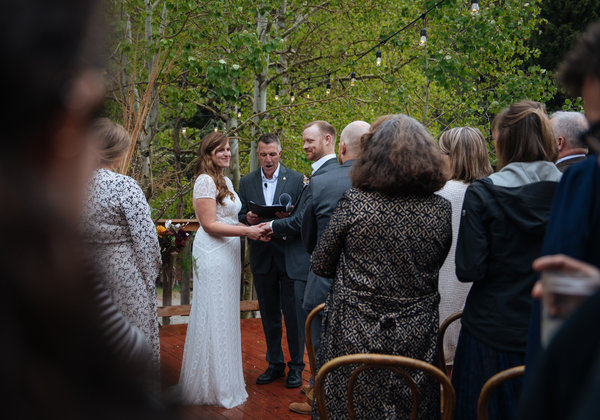 She posted pictures of herself with her Bernese Mountain dog and mentioned hobbies like quilting and sewing. “She’s an old soul,” said Wayne Lamberton, her father who is a sixth-generation Vermonter. He described a typical Sunday morning with her this way: “I have a Bloody Mary and she knits.”

Her profile stood out to Drew Murphy, 33, who was living about an hour from her in Larkspur, Colo., mainly because it seemed like she wasn’t trying too hard to stand out or appear cool. Mr. Murphy, who grew up in Sugar Land, Tex., and also graduated from Colorado State, was working as an outdoor education instructor at Stone Canyon Outdoor EdVentures teaching astronomy and geology to sixth graders. He contacted her and they began emailing. They discussed everything from working with children to the importance of solitude, nature, being self-sufficient, and drinking strong coffee.

Eventually, they met in person. “I saw he had a beard,” Ms. Lamberton said. “It was so comforting to me because I grew up in Vermont with a bunch of men who had beards so I thought, ‘This is the man of my dreams.’”

Ms. Lamberton, who now works with autistic children at Children’s Hospital, added, “It was just like jumping into a conversation with someone I’d known forever.”

On several of their early dates, they would pack up hammocks and hike to a quiet spot near Brainard Lake in Ward, Colo., or Lefthand Canyon outside Boulder. Both are easygoing and thoughtful so there were long periods of silence as they hung side by side.

“Joelle whispers, she waits, she’s patient,” said Lauren Coyne, a speech therapist who works with her. “Around children who are overstimulated by parents, by preschool, TV, music, radio, therapists, Joelle is a calming presence.”

Walking down abandoned streets or through untended cemeteries where the tombstones listed like loose teeth, it was as if they were the last living people on earth. “We both have the same outlook on life, of working hard for what we have and also being kind to everyone we come into contact with,” she said. “I’ve never seen Drew not be kind. He’s so gentle.”

The couple visited Creede, Colo., a former mining town in the San Juan Mountains. “There’s this massive field that was completely empty,” Mr. Murphy said. “They had a picture next to the field where you could see what it used to look like. Rows and rows of shelters and houses. Now, it’s just grasses and plants. That’s what creates spookiness for me, a formerly populated place that’s empty.”

Their favorite town is Silver Plume, which lies in a narrow, windy canyon about 55 miles west of Denver and calls itself a “living ghost town.” (It still has about 200 residents.) Silver Plume’s often-deserted streets are lined with colorful Victorian houses built during the silver-mining boom of the 1800s and early 1900s. Many of the buildings appear untouched since then, whether inhabited or not, and it seems the townspeople prefer dilapidation to development.

Silver Plume is also reported to be haunted, and many of its buildings have eerie stories attached to them. The first time Ms. Lamberton and Mr. Murphy visited, they stayed in an A‌i‌r‌b‌n‌b‌ on Main Street in the Knights of Pythias building, which looked like a weather-beaten dry goods store in a Quentin Tarantino Western. Shae Whitney, a former owner of the building, said she and her husband often heard the ghosts of miners playing raucous card games in the middle of the night. “We’d smell cigar smoke and hear glasses clinking and music. Old-timey music,” she said.

Ms. Lamberton believes she heard the ghost of Clifford Griffin, a miner who played the violin. He died in Silver Plume in 1887 under mysterious circumstances. She thinks she heard him playing one night, though she admits it could have been the wind.

“We are all so temporary on this planet,” she said, “and going to these ghost towns is a nice reminder for Drew and I to really take the time to appreciate each other and what has come before us and even what will come after us.”

In 2017, the couple bought a house — a dilapidated old miner’s cabin, of course — in Lafayette, Colo. Ms. Lamberton’s father traveled to Colorado to help them fix it up. “The first weekend Drew worked alongside us in a Lamberton-led renovation weekend, I knew he was in it for the long haul,” Ms. Lamberton wrote in an email. “My dad led us through four- to 12-hour days laying flooring, rewiring outlet boxes, tearing down wallpaper.”

Living together was easy. Both love to cook and avoid extravagance. “I still cut out coupons from the Sunday paper — something my grandma and I did growing up,” she said. Ms. Lamberton bakes cakes for Mr. Murphy and he brews her coffee. She calls him “the wood stove master” because he’s always chopping wood and building fires in the winter.

Mr. Murphy, now a sales associate at Nite Ize, a Boulder company that makes headlamps, bicycle lights and other illuminated outdoor gear, proposed to Ms. Lamberton last October. He did it in a very low-key way. “I was coming out of the bathroom brushing my teeth and there he was on his knee,” she said. “I totally dropped my toothbrush.”

On June 22, they were married in Silver Plume at the Bread Bar, a former bakery billed as a “drinking establishment” by the proprietors. The Bread Bar feels loyal to the past, albeit with colorful, current cocktails. It’s dark as soot on the outside and tiny inside with just a few tables and stools. There’s a curvy Victorian-style couch, like one you might see in an old brothel, a flour scale hanging from the ceiling, and vintage wallpaper.

Before the wedding began, local dogs wandered by and Samantha Alviani, the bartender and co-owner, greeted each by name.

When the couple arrived, they fit in perfectly. The bride wore a lacy white Victorian-style gown and the groom had on a slim, understated gray suit.

The 47 guests arrived together by bus (most stayed at a hotel in Golden, Colo.) and instantly packed the bar. Nicole Molloy, a childhood friend of the bride, stood by the door saying “welcome” to everyone. When asked where she grew up, she pulled up her dress slightly to reveal a large tattoo of her family’s cabin in Vermont.

Among the guests were the groom’s parents, Beth and Brent Murphy of Castle Pines, Colo. His mother is a former preschool teacher; his father is a petroleum engineer at Pinedale Energy Partners, which has offices in Englewood, Colo. The elder Mr. Murphy stood out in the crowd with a wide-brim black cowboy hat that seemed to also function as an umbrella. Most guests just stood unprotected in the intermittent rain, huddled closely together.

The weather was cold, moody and perfectly spooky. And the couple appeared to love it. “Drew’s favorite climate is somewhere between 50 and 60, high moisture, like Ireland,” Ms. Lamberton said. The two walked around town before the ceremony and the bride, much hardier than most, returned with a muddy hem. “Oh yeah, it got super dirty at the bottom!” she said.

The wedding was held on the bar’s small outdoor deck. The couple had a self-uniting marriage ceremony, which is legal in Colorado, with Phil Scott, the governor of Vermont and a friend of the bride’s family, guiding them through the vows.

A feeling of closeness was one of the couple’s main goals for the wedding. “Getting married in a ghost town gave us time to pause and tell everyone how much they mean to us,” Ms. Lamberton said. “It eliminates a lot of background noise. It’s taking all of our closest friends up to a space that’s quiet and moving slower.”

After the ceremony, each guest was given a handwritten note from the couple on cards embossed with the image of a miner carrying a pickax and a shovel. The cards were made by Brian Wood, a neighbor of the couple who runs Dogs & Stars, a small batch letterpress print shop.

Later, everyone gathered in a tent next to the bar for a dinner that included tri-tip steak with chimichurri sauce. The tent was decorated with hanging sculptures fashioned out of pussy willows the bride’s mother, Dee Lamberton, foraged in Vermont. From the outside, the tent was an amazing sight, full of people giving toasts and laughing loudly while surrounded by dilapidated, empty buildings.

“In a way, we were kind of enlivening the town,” Mr. Murphy said. “It was us bringing not only our money but our presence and our life and our energy.”

Sewing Circle The bride sewed the table runners for the reception with the help of her mother and grandmother, Linda Tomasello, both longtime quilters. “Three generations of us around the kitchen table,” said the bride’s mother.

Practical Gifts The couple registered at Food52, Schoolhouse Electric and Blueprint. They listed useful gifts like baking tools; dishes by Francis DeFabo, a potter who made bowls and plates for the reception; coffee equipment; a splitting ax; and money for a Scotland honeymoon.

Coffee for All As guests departed, they were each given a bag of beans roasted by Neige La Rue, who until recently ran the Snow Street Coffee Company in Louisville, Colo.

A Year of Postcards During the wedding, the couple asked the guests to write messages to them on vintage postcards they provided. The bride’s mother collected the cards and plans to mail one every week or so to the couple throughout their first year of marriage. 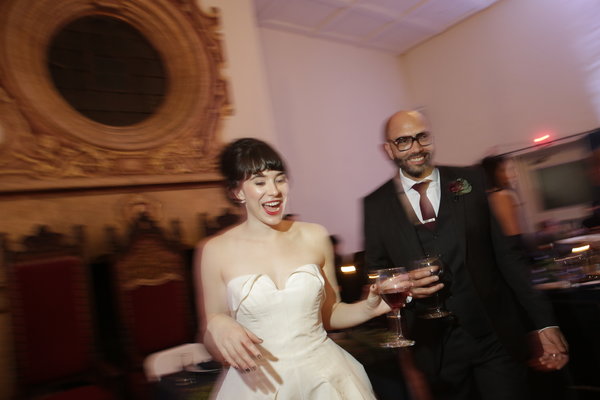 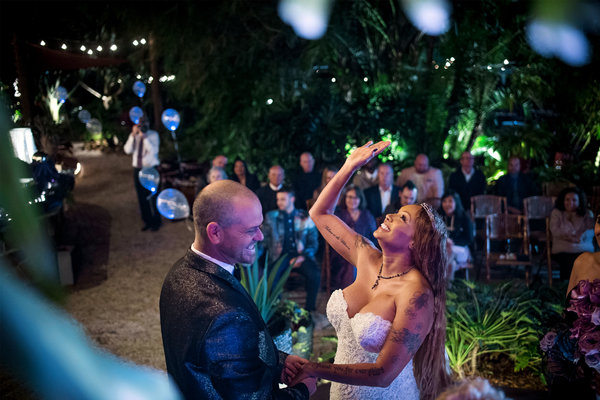