A Tour of the Tour Buses

Summer is high season for concert tours. Bands travel to Instagram fests like Bonnaroo, in the wilds of Tennessee, and old standbys like Glastonbury, in England. And of course there’s always a sweaty bar to play.

There are myriad options for getting there (Uber, Mom and Dad’s Subaru, road trip!), but how do the stars make it? In grand style, apparently, or at least in their own style.

Here, two bands talk about life on the road and the pleasures of a home that travels with you.

Screaming Females are an indie rock band from New Brunswick, N.J., who have toured all over the world (they recently returned from Australia and New Zealand). This month, the band is back on the road in North America, driving themselves to gigs in their van.

“If you’re in a van like our van, you live in it. It becomes your house. We spend hours traveling. We don’t tend to sleep in it. That’s not to stay that we haven’t. With any object you share with other people, you talk about the minutiae of how it functions.” Marissa Paternoster, singer and guitarist 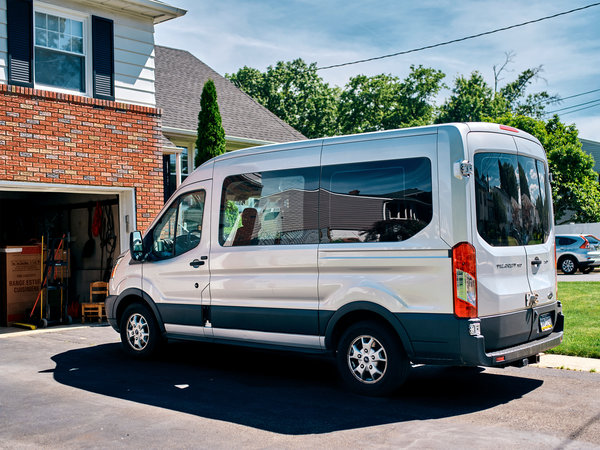 “It’s a Ford Transit 150. We got the shortest length and medium-height model. We play a lot of gigs in bars and in cities. If you come through with a van and a trailer, which a lot of bands on our level tour with, it can be difficult to find parking. The benefit of the smallest length is it’s easier to park and steers like an S.U.V. The medium height meant we had enough room to stack a bunch of T-shirts to sell.” Jarrett Dougherty, drummer

“We usually call it the Van. Which is not the most creative name. Jokingly, we call it the Whip when we open up our bar, which just means you sit in the back and drink.” Marissa Paternoster

“Over the last two or three years, we’ve put 100,000 miles on it across North America. It’s been to every state other than Hawaii and Alaska, and it’s been to D.C., and probably five provinces in Canada.” Jarrett Dougherty

“If you spend 12 hours sitting in the same car, I think it comes pretty naturally to tinker with what’s back there. In the old van, we collaged the entire ceiling. I decorated our new van a lot to make it a little more cozy. Cardboard is very plentiful. If we’re lucky and have a good week we’ll sell a whole box of T-shirts.” Marissa Paternoster

“I put in one of those wire shelves that you buy at Home Depot. I affixed it to the cage in the back so we don’t squish all of our records. Whenever we’re loading up the van at the end of night, that gets the most comments. ‘Oh, you’ve got a shelf in there.’” Mike Abbate, bass player

“I don’t think that any of us dream of the next level up because it doesn’t seem viable to travel in anything fancier than our current fancy van. It’s a small operation — we’re playing in small rock clubs every night.” Mike Abbate

“It would be embarrassing to pull up in a big coach bus. We’re very grateful to have such a nice van. We’ve definitely ridden in some vehicles that were spotty. Our first van broke down near Las Cruces. It was very, very hot. There were a bunch of snakes. Big ups to our van. It’s the right size for the job, you know.” Marissa Paternoster

Old Dominion are a country band from Nashville. Their last album, “Happy Endings,” debuted at No. 1 on the country charts; its commercial success has allowed five members and their entourage to tour in a customized coach bus this summer.

“We did spend 10 years in those vans. We went through three of them. That first bus is usually just a rental, you get whatever you get. As you get more consistent, you get to pick one that you get to live with for a year. After that, if you can afford it, you pick a coach company. You tell them, ‘We’re doing a two-year lease, but we’ll build it from the ground up.’ The color choices on the curtains, the flooring choice, the couch cushion choice — we picked them to make it feel like home.” Geoff Sprung, bass player

“When we first got our bus, we pulled the van up that we’d been traveling in for years. Got into the bus, rolling down the road, cranking music. Our tour manager came back and said, ‘Guys, there’s 40 feet of bus. You all don’t have to sit crammed around the same couch.’” Matthew Ramsey, singer

“Sometimes those custom things happen out of boredom: ‘Hey, we should get some AstroTurf.’ Then it’d be football season: ‘Man, if we just had a TV out here, it’d be cool.’ We just suggest something and our management makes it happen.” Matthew Ramsey

“You have to be careful what you say out loud. We did our first big headlining tour last year or two years ago. Someone said, ‘It’d be cool if we could stand in our greenroom and spin some vinyl.’ Our production team had it custom built. None of those luxury items are essential — we lived for years without any of that stuff. But at festivals, your bus, that’s the extent of your comfort area. When you can hang outside and watch TV out there, it’s like another living room. It expands the living space.” Geoff Sprung

“We have moments where we fly sometimes. One of the best things is when the bus can pick us up at the airport. Because it’s like your home coming to pick you up. Our beds are there, all the food we like is there. I definitely love good coffee so I’ve turned everybody into coffee snobs. That happened in the van. I started bringing a French press in the van.” Matthew Ramsey

“The same five guys have been in a van and now this bus for over a decade. You’re in those close quarters together a couple hundred days a year. Because of that environment, I had to learn everyone’s idiosyncrasies and quirks because you either celebrate it or it drives you crazy.” Geoff Sprung

“Living in Nashville when we were struggling, there’s buses everywhere. You see them all the time. It is this benchmark that you shoot for. Now we’re traveling with four buses, with our crew. We’ve crossed into a point where it’s ridiculous and mind-blowing.” Matthew Ramsey

Steven Kurutz joined The Times in 2011 and wrote for the City and Home sections before joining Style. He was previously a reporter at The Wall Street Journal and Details. @skurutz