After 5,060 Straight Yankees Games, a Day Off for John Sterling

ST. PETERSBURG, Fla. — For the first day off from his job in 30 years, the man who broadcast every pitch thrown by Mariano Rivera and every inning played by Derek Jeter planned to enjoy waking up whenever he wanted. He also had a project to tackle at home: sorting through a pile of mail that he has ignored for a while.

“I’m getting my act together for the second half,” John Sterling, the longtime voice of the Yankees on the radio, said Wednesday, the day before his break started.

Until Thursday, his 81st birthday coincidentally, Sterling had worked 5,060 straight Yankees games since 1989, according to the Yankees. The baseball season is an eight-month marathon — two for spring training and six for the 162-game regular season — and that does not include the playoffs, which can add another month for a team that reaches the World Series.

It all caught up to Sterling. And so, for the first time since Don Mattingly was the team’s first baseman and Dallas Green was the manager, the Yankees will play a game without Sterling behind a microphone.

In fact, he will miss the entire four-game series against the Tampa Bay Rays that will close out the first half of the season. Coupled with the upcoming All-Star break, that will give Sterling eight straight days to rest.

The reason for the time off: his health. In interviews this week, Sterling has said he feels a bit under the weather. But before Wednesday’s game against the Mets, Sterling insisted he wasn’t sick.

He later said his doctor had set three goals for the respite: “Eat to put back on the weight I’ve lost, drink a gallon of water a day, and sleep.” Sterling, a father of four, also heard from several worried friends telling him they were glad he was finally taking a day off. Some had noticed that Sterling was coming to work tired — the Yankees’ recent trip to London didn’t help — and struggling to walk up stairs. 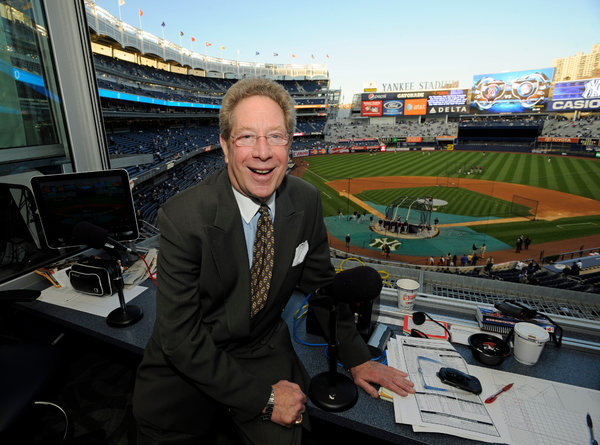 “I just want John to be healthy, and we’ve got a long way to go before, hopefully, a World Series,” said Suzyn Waldman, Sterling’s radio broadcast partner of the past 15 years. “And the streak is wonderful, but that’s the past.”

Waldman recalled being in Baltimore when infielder Cal Ripken Jr. took himself out of the Orioles’ lineup against the Yankees on Sept. 20, 1998, ending his record streak of consecutive games played at 2,632. Like Sterling this week, Ripken finally relented and admitted a day off was for the best.

In 1989, Sterling missed two games to attend his sister’s funeral — and he still doesn’t think those games should count against his streak.

But this time, Sterling said, the decision to take a break was fairly easy. His bosses and colleagues at WFAN had been encouraging him to rest.

Legions of Yankees fans have grown up listening to Sterling’s baritone voice, outsize personality and trademark phrases, including personalized home run calls and declarations of victory: “Theeeeeeee Yankees win!” He had cataract surgery last year to correct his vision, which had led to miscalculating some fly balls.

Sterling wears a suit to the ballpark every day, even though his audience cannot see it. When he talks about a specific game off the air, he sometimes grabs his left ear as if he were wearing his headset.

“For him to have gone this long without missing a game is frankly unfathomable,” said Jack Maldonado, the longtime producer of the Yankees’ radio broadcast.

Filling in for Sterling during this series will be Ryan Ruocco, a television play-by-play announcer, studio host and reporter for the YES Network who also has a background in radio. The Yankees’ television broadcast will also have a void: Michael Kay, the play-by-play announcer on the YES Network, said on Wednesday that he would miss about a month because of surgery to correct a problem with his vocal cords.

Howie Rose, the Mets’ radio voice, said he had long hoped for Sterling to take a break. The grind of the season and the late-night arrivals in a new city, the 65-year-old Rose said, weigh exponentially more on the body with age.

“I just hope, as a friend, assuming that he gets through this and gets back to good health, that he realizes that none of us have a license to live forever,” Rose said. “I just hope that, when the dust settles, that John is able to enjoy his life just as much away from the ballpark.”