Ana Navarro revealed she and her ‘View’ co-hosts were ‘so excited’ to welcome VP Kamala Harris to the studio before having to suddenly leave the set, along with Sunny Hostin, after testing positive for COVID-19.

Ana Navarro, 49, is describing Thursday’s episode of The View as “surreal.” The talk show host appeared in a virtual interview with Anderson Cooper 360 following the shocking televised moment that happened just seconds before the ABC talk show was set to welcome Vice President Kamala Harris, 56. “It takes so much work to do an interview like this and it’s something that we were excited about,” she to Anderson Cooper on Friday, Sept. 24.

“We were prepared to ask some tough questions. We were very proud to have the vice president come on The View and all of a sudden it turned into like an episode of Curb Your Enthusiasm. It was just surreal,” she went on, drawing comparisons to the eccentric HBO comedy starring Larry David.

While live on the air, Ana and Sunny Hostin, 52, were abruptly asked to leave set by their producer after COVID-19 tests both returned as positive — despite their double-vaccination status. Notably, a producer later came out and explained to the audience that after being re-tested, the two women tested negative — suggesting the first was a false positive (since, Ana has taken another rapid antigen test and PCR that both returned back negative). Shortly after the unexpected moment, host Joy Behar was about to introduce the Vice President before being instructed to go to break.

“Now, because of COVID the table at The View is like the size of an aircraft carrier. Joy is clear on the other side. I don’t think she sees the commotion of what Sunny and I are told by the executive producer, Brian Teta, that this is happening,” Ana went on. “And of course it’s a very awkward moment. It’s puzzling. You’ve got a hundred things going through your head…We go ‘What did you just say? Did I just hear you right?’ And this is in the middle of live TV. And, as you know, Anderson, the show must go on,” she added. The interview with Kamala went ahead as scheduled, however, was conducted via Zoom from another part of the studio. 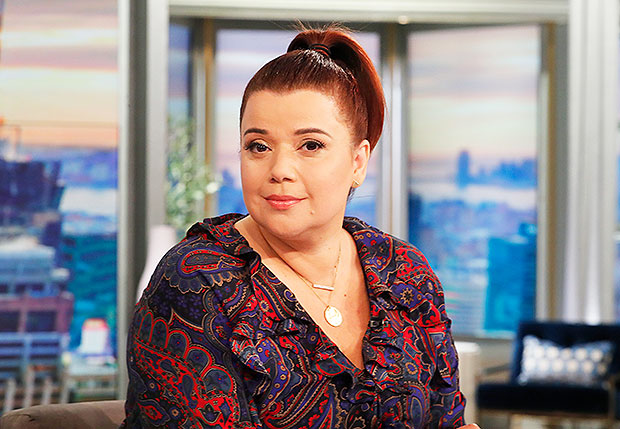 Ana noted that the hosts had “no contact” with the Vice President ahead of the scheduled appearance. “We had no contact with her for the entire day and so they’re trying to figure out what is the safe way to conduct this interview and how do we do this?” she said. “And I’ve gotta say, her team rolled with it and…she ended up doing the interview from that room via remote…while we were locked up in our dressing rooms.”

Kamala made reference to Ana and Sunny’s COVID-19 test results during her brief interview on the show. “Sunny and Ana are strong women and I know they’re fine, but it really also does speak to the fact that they’re vaccinated and vaccines really make all the difference because otherwise we would be concerned about hospitalization and worse,” the Vice-President said. Notably, COVID-19 infections can still occur in those who are vaccinated — but they are more likely to asymptomatic or have a mild case per the CDC.