Salma Hayek took to Instagram to share a hilarious video that showed her ‘teaching’ Angelina Jolie how to do the ‘Mexican mordida’ with her birthday cake while surrounded by a group of friends.

Salma Hayek proved she had a very eventful 55th birthday with her latest Instagram video! The actress was surrounded by family and friends, including fellow star Angelina Jolie, 46, while sitting in front of her birthday cake, in a clip she posted on Sept. 3. The guests were all shouting “Mordida!” before she put her face in the cake to take the first bite, which is a tradition Mexicans take part in during birthday celebrations.

Salma revealed she and her brother were teaching Angelina, with whom she stars in the upcoming Marvel film, Eternals, about the fun tradition, in the caption for the post, and from the smile on the Girl Interrupted star’s face, she seemed like she was having a great time learning! “My brother @hayekstudio and me trying to teach Angie how to do the mexican mordida @angelinajolie,” the caption read.

Once Salma shared the epic video, her fans were quick to respond with comments. In addition to several birthday wishes, one fan wrote, “OMG I loved this!” while another wrote, “Laughs, friends, family, and cake??! What a celebration of life!!” A third called the video “nice” and many more shared laughing emojis. 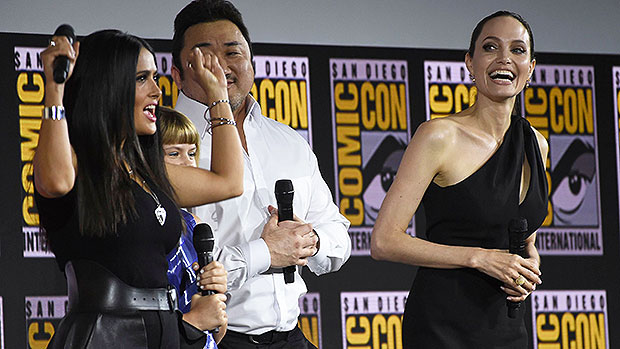 Before Salma made headlines with her birthday celebration, she did so when she shared a rare pic of her stepson Augie, 14. In the snapshot, she was posing and smiling while sitting with the teen, who is the son of her husband François-Henri Pinault, 59, and Linda Evangelista, 56, during a family vacation. “Here comes the weekend!! Viva el fin de semana!!! #tgif #weekendvibes,” she wrote in the caption.

Salma officially became Augie’s stepmom when she married François-Henri in 2009. Although he was born in 2006, Linda didn’t reveal the identity of his dad until 2011, when she was seeking child support from François-Henri. The parents eventually worked out an out-of-court settlement in 2012 and from the look of Salma’s latest pic with Augie, everything seems to be going well!