At Valentino, Diversity by Design 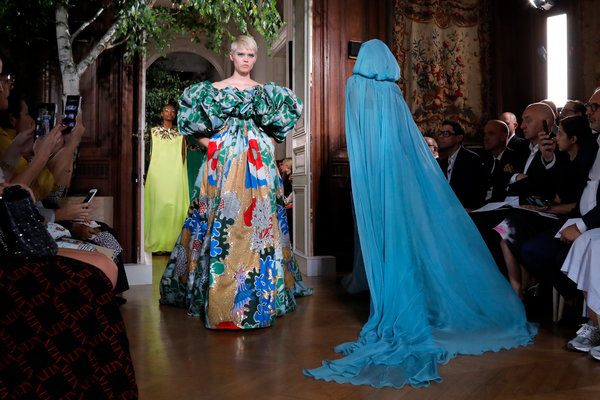 PARIS — Issues of inclusion and cultural sensitivity — and fashion’s lack of understanding thereof — have been at the forefront of the general conversation for awhile now, though they have been particularly pressing since last fall, when the industry began what seemed like a run of increasingly tone-deaf products accompanied by a slew of mea culpas.

The discussion has not, however, apparently trickled up to the couture, despite the fact that in many ways this particular style sector would seem ripe for exactly such a reckoning, premised as it is on exclusivity in both price and access. It is not that designers are sticking their heads in the sand exactly, as much as simply allowing themselves to be blinded by beauty.

So it was notable, on the final day of the Paris shows, to hear Pierpaolo Piccioli, creative director of Valentino, effectively dedicating his collection to diversity of the most personal kind.

“Last season I was really focused on inclusivity in couture,” he said backstage before the show, referring to his January presentation, which specifically addressed high fashion’s history of racism by featuring 65 models, 45 of whom were black. “But couture is essentially about the one of a kind, which is about individuality;” about every woman as fully, resplendently herself. Whatever that may mean.

So this season he decided to celebrate difference: of skin color, age, roots and silhouette (though not, however, of body shape). He imagined folkloric roots and memoryscapes. Each of the 71 looks was named after the actual people who made it.

There was Lauren Hutton, herself 70-something, in “Rocco, Rosa, Maria R.,” a louche beige wool parka lined in glinting silk faille atop a celadon dress loosely tied at the waist, sequined rose opera gloves slouched down to the wrists and mustard boots on her feet. Here was Gigi Hadid in “Maria C., Giulia G.,” a strapless empire violet faille gown with an enormous bow at the bust and giant blooms tumbling down the skirt in sequins, mother-of-pearl and jade beads.

There was Georgina Grenville, now in her 40s, in “Marianna, Maria P.,” a narrow lace sheath-turned-pointillist-seascape, every dot a sequin, her head enclosed in an ivory ostrich feather hood; here was Adut Akech in “Debora, Cristina, Sara, Ricardo, Elena,” an explosion of ruffled amethyst taffeta that took 903 hours to make.

There were slithers of tulle smothered in metallic pearls like a ’70s disco diva, simple wool tunics and trousers paired with flowing velvet and satin capes (no one does casual extravagance like Mr. Piccioli), botanical gardens of organza and lace, and glinting jacquard Bermuda shorts. Shorts! There is no hierarchy of separates here.

At the end of the show Mr. Piccioli pulled his entire workroom out with him for a bow on the runway, and they all went over to hug and kiss Valentino Garavani and Giancarlo Giammetti, the brand’s founders who were watching from the front row.

“It’s my fantasy of a world where we can all live together,” Mr. Piccioli had said backstage, and he was referring both to his mood board — where art by Rosso Fiorentino, the Renaissance Florentine painter, coexisted with a sketch of Diana Vreeland and the photographs of Irving Penn (among other visuals) — and to his work.

Hard to imagine in reality? Perhaps. But the result was gorgeous to look at. Mr. Piccioli may be the Don Quixote of fashion, dreaming the impossible dream. But he makes an awfully good case for the virtues of trying.

Besides, he wasn’t, as it turns out, the only designer addressing an issue of the day. Viktor Horsting and Rolf Snoeren of Viktor & Rolf likewise stuck their heads out of the gilded tower, once again using their work to explore the question of sustainability, otherwise absent from runways this week.

(Though at first it seemed as though Jean Paul Gaultier was taking on climate change thanks to an opening of super-fancy puffer jackets and dresses in I’ve-given-up-real-fur-for-fake prints, it turned out to be a chimera, and soon he was back to couture-as-cabaret: jutting shoulders, giant corsetry, optical illusions.)

Working with the Dutch artist and textile designer Claudy Jongstra, who has made felted wool transcendent by controlling the whole process — tending her own herd of Drenthe Heath sheep, shearing them, using only natural dyes she developed in her own laboratory made from plants she grew — the designers needle-punched, darned and patched and quilted an ode to nature. Ms. Jongstra’s wool met multicolored scraps of old satins, taffetas and silks cast off from previous collections in coats of dark moonlit nights; dresses of planets swirling overhead; and skirts of the sun rising over a rolling field.

It wasn’t as meme-worthy as their last collection — the one titled Fashion Statements and featuring message tulle, such as the giant ruffled trench worn by Christina Aguilera this time around, sitting front row and center and flaunting a vulgarity followed by the declaration “I’m Going to Paris.” But it had a real point. Couture could use some more of that, these changing days. 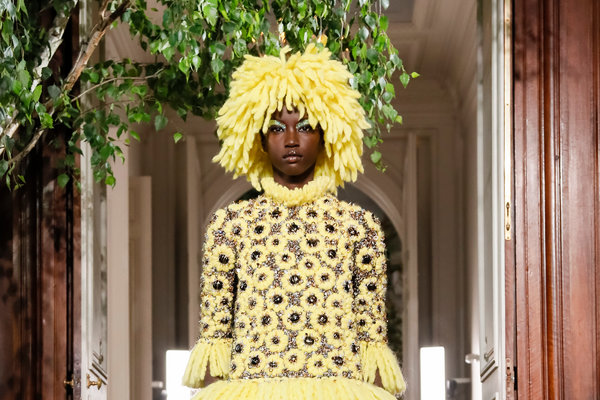 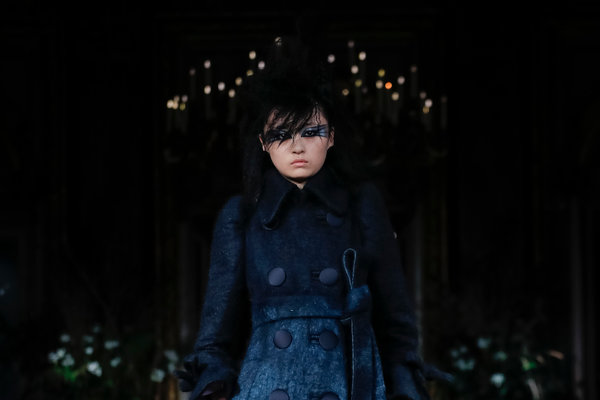 Vanessa Friedman is The Times’s fashion director and chief fashion critic. She was previously the fashion editor of the Financial Times. @VVFriedman