Bella Thorne to Mom: 'Our Relationship Is F–ked Up But I'm Glad We Are Here'

Making amends. Bella Thorne and her mother, Tamara Thorne, are working through their issues.

The Midnight Sun star, 21, shared a collage of photos of herself with Tamara, 48, on Instagram on Monday, July 22. 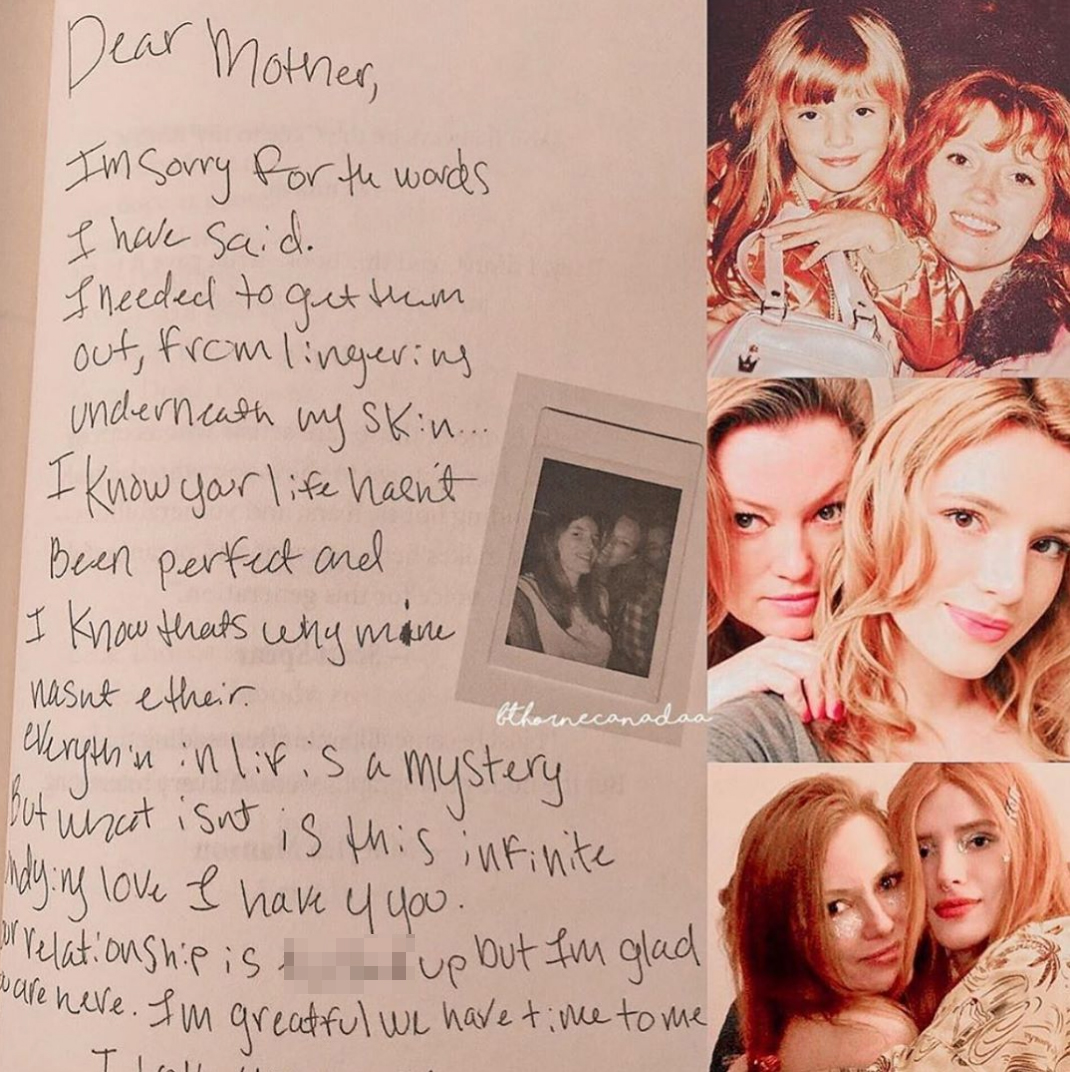 “Dear mother,” she began her caption. “I’m sorry for the words I have said. I needed to get them out from lingering underneath my skin. … I know your life hasn’t been perfect and I know that that’s why mine hasn’t been either, everything in life is a mystery but what’s not, is this infinite undying love I have for you.”

The Disney alum went on to acknowledge that she and Tamara haven’t always been on the best of terms. “Our relationship is f–ked up,” she conceded.

Still, Bella said she was happy to be making progress: “I’m glad we are here, and I’m grateful we have time to mend. I love you mommy.”

The Life of a Wannabe Mogul: Mental Disarray author didn’t clarify which words she was apologizing for.

Bella opened up about her past on Good Morning America earlier on Monday, claiming to the outlet that she believes she was a victim of Stockholm Syndrome while experiencing sexual abuse starting at age 6.

“I mean, when you’re raised with someone and you don’t know that it’s wrong, it’s just very like an everyday occurrence, like no big deal,” she said.

The Babysitter star previously spoke about her struggles while growing up in January. “I was sexually abused and physically growing up from the day I can remember till I was 14,” she alleged on Instagram at the time. “When I finally had the courage to lock my door at night and sit by it. All damn night. Waiting for someone to take advantage of my life again. Over and over I waited for it to stop and finally it did. But some of us aren’t as lucky to get out alive. Please today stand up for every soul Mistreated. #timesup.”

Tamara claimed to the Daily Mail that same month that she had been unaware of the abuse her daughter had suffered. “It’s a private family matter and I only just found out now,” she said at the time. “I’m just talking to a therapist about it. I’m processing it. It’s not something I knew about before.”

Bella’s father, Delancey Thorne, died in a car accident when she was 9 years old. She was raised by single parent Tamara along with siblings Kaili, 27, Dani, 26, and Remy, 23, as well as a family friend named Stephan Muskus, who was taken in by the Thornes, according to the publication.

Tamara’s brother, James Beckett, also spoke to the publication about Bella’s claims. “Delancey would never stand for that,” he said. “My sister would never have allowed it. We had never heard about any of this before now.”