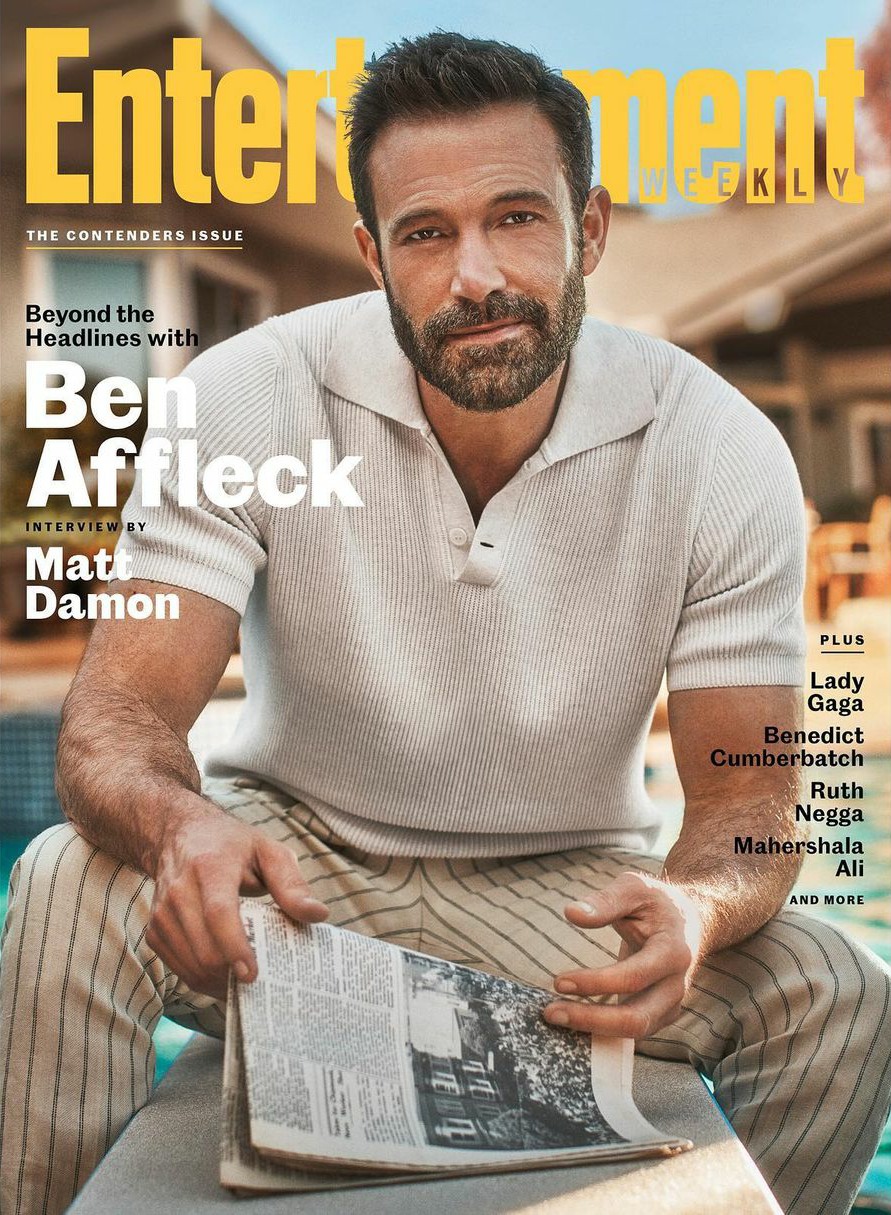 Ben Affleck’s Bennfer glow-up is no joke. Originally, back in 2002-03, the glow-up was too much, he was too bronzed, too varnished-looking, too Ken doll. But that’s the thing about a revival 18 years later – he’s older and wiser, and the glow-up is more subtle. Suddenly, he doesn’t look like the beefy and Botoxed 40-something chasing his youth. He looks like a man who is nearly 50, who is comfortable in his own skin and happy with his 50-year-old girlfriend. Let’s hope. Ben covers Entertainment Weekly to promote The Tender Bar, and the interview was conducted by Matt Damon. It is quite annoying at times, but Ben does say some very interesting stuff here and there – you can read the full piece here. Some highlights:

On George Clooney: “I think it’s hard to overestimate the degree to which a director’s attitude, openness, comfort, generosity pervades the set and sets a tone. George does that better than I do. And he was enormously respectful of the degree to which I take very seriously my need to be there with my children for my half of the custody. I mean, he bent over backwards. You didn’t have to be there until midnight every night [or] obliterate the rest of your life in order to do this. Because he’s got this spectacular wife, he’s got his children, he’s got a very rich, full life. He’s got to sell coffee— Tequila and coffee. That’s no joke…I’ll tell you what I want to be. I want to be George Clooney selling coffee and tequila. Because that really frees you up to do the movies you want to do.

On his early work: “Starting off, you have these ideas about success. You know, my mother made $28,000 a year. So I would be like, “How could I justifiably say no to this?” Just not understanding the value of turning things down. People talk about your choices and I want to say, “Well, it’s not like I was passing on Scorsese movies.” Like, “No, Marty, I’m good. I’m going to do Surviving Christmas.” Part of our fates are controlled by the opportunities we have in terms of material and directors.

Where Gigli sits with him now: “…The truth about that movie and what it taught me was how much everything around a movie sort of dictates the way people see it. But for being a movie that’s such a famous bomb and a disaster, very few people actually saw the movie. It doesn’t work, by the way. It’s a sort of horse’s head in a cow’s body. And the studio at the time, because I had begun having this relationship with Jennifer Lopez, which was selling a lot of magazines and appeared to generate a lot of enthusiasm, they just predictably latched onto, “They want a romantic comedy. They want the two of them together. More of that!” And it was just like that SNL sketch: “Bad Idea.”

Gigli just never worked: “But even movies like The Sum of All Fears that worked commercially but didn’t have any depth to them, I didn’t do anything particularly interesting in them. [Gigli] didn’t work and we did five weeks of reshoots, which we knew were not gonna work. It was a movie that didn’t work…. Interestingly, I learned more about directing on that movie than anything else because Marty is a brilliant director, really gifted. It’s not like it’s worse than all… there’s a bunch of horrible movies and in terms of losing money, I’ve had five movies — at least! — that have lost more money than Gigli has. It’s just that it became a story in and of itself. The funny name, the Jennifer Lopez romance and overexposure of that, it was kind of a perfect storm.

What he thought his job was in the Bennifer 1.0 years: “I thought my job was to be a cipher. I can see now how people looked at me and thought of this person as some callow frat guy who’s cavalier, or has too much. It engendered a lot of negative feelings in people about me. There’s that aspect of people that I got to see that was sad and hard, it was depressing and really made me question things and feel disappointed and have a lot of self-doubt. But if the reaction to Gigli hadn’t happened, I probably wouldn’t have ultimately decided, “I don’t really have any other avenue but to direct movies,” which has turned out to be the real love of my professional life. So in those ways, it’s a gift. And I did get to meet Jennifer, the relationship with whom has been really meaningful to me in my life.

Being able to sell magazines, but not movie tickets. “I remember feeling like it was the worst of both worlds. I always viewed it that the tax you paid to get the chance to do this work was to sacrifice your private life, and people were going to have license to make sport of you to some degree. And I didn’t go into it blindly. I knew that Sean Penn and Madonna were a tabloid story when I was young. I knew that could happen. Jennifer and I happened to be together at a time where the whole industry of celebrity journalism, if you want to call it that, sort of exploded. But I thought, “S—, this is really not how I had hoped to go, where I’m going to be, what? Famous for being an a–hole or a failure and not able to work?”

The whole piece was pretty interesting and I didn’t even include some of my favorite parts, where Matt and Ben were reminiscing about Robin Williams, and how Ben thought Dazed and Confused was a huge bomb, and his delight in seeing it become a cult classic. Ben even says that the only film on his CV that his kids have even watched is Armageddon and Matt admits that, at the time, he would have said yes to Armageddon too. The stuff about Gigli is getting the most attention, and for the life of me, I don’t understand why Ben cannot bury that ghost. J.Lo doesn’t have to still “wear” Gigli all the years later. I’ve always said/believed that Ben needs to approach the Gigli conversation differently, or just… with fewer words.