BRIAN VINER : Slick prequel to The Sopranos hits all the right notes

Slick prequel to The Sopranos hits all the right notes, writes BRIAN VINER

The hit television drama The Sopranos ran from 1999 to 2007 and ever since has enjoyed that blessed small-screen afterlife of eternal repeats.

So how else can its creators capitalise on what, for my money, is the greatest long-running TV drama ever made? The Many Saints Of Newark, a two-hour prequel, is the answer.

The film whisks us back in time to a four-year period beginning in 1967, when violent race riots erupted in the New Jersey city of Newark. It introduces us to the generation of mobsters we only ever heard about in the TV series, and explains their formative influence on the young Anthony Soprano.

In adulthood, as so gloriously played by the late James Gandolfini, Tony Soprano was the boss of an organised crime family. But fans know the key word in that sentence is not ‘boss’, ‘crime’ or even ‘Soprano’, but ‘family’. 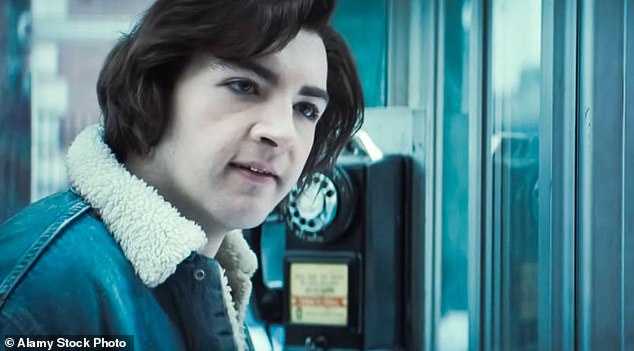 The film whisks us back in time to a four-year period beginning in 1967, when violent race riots erupted in the New Jersey city of Newark

Tony was also a husband, a father, a son, an uncle and a nephew, and every one of those relationships came with a whole trailer-load of emotional baggage, unloaded on his long-suffering therapist.

The genius of David Chase, who conceived The Sopranos and has co-scripted the film with one of the show’s regular writers, Lawrence Konner, was in humanising this bunch of terrifying mobsters, who maimed and murdered with chilling impunity, by giving them the same messy domestic concerns as the rest of us — right down to putting the bins out.

That brilliant formula, stretched over eight years and 86 episodes, is weakened in a one-off feature format. But if the older, ruthless Tony is a stranger to you, then you won’t get much of a kick anyway out of meeting the younger, impressionable Tony.

Fans, on the other hand, will appreciate how well Gandolfini’s son Michael, who was just 13 when his father died eight years ago, plays the future crime lord as a teenager. It’s not just sentimental casting; he’s completely convincing.

They will rejoice, too, in the portrayals of familiar characters as younger men and women, among them charmless Uncle Junior (Corey Stoll), Tony’s monstrous mother Livia (Vera Farmiga), psychopathic Paulie Walnuts (Billy Magnussen) and Silvio Dante (John Magaro), the consigliere with a hairpiece so bad it deserved a concrete overcoat of its own.

Moreover, if you’re more of a nylon anorak than a concrete overcoat, then you will remember some of the anecdotes about the old days they told in the TV series, which are here brought to life. One of them has Tony’s father (Jon Bernthal) firing a bullet through Livia’s beehive hairdo to shut her up as they drive home from a night out. 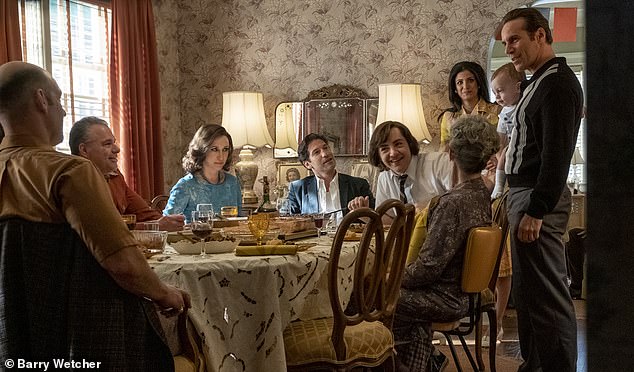 The film’s lead character, though, is another man who was dead by the time television took up the story: hot-headed Dickie Moltisanti (the excellent Alessandro Nivola), who was much more of a mentor in Tony’s boyhood than either of his parents, and whose son Christopher (Michael Imperioli, contributing here as a beyond-the-grave narrator), duly became Tony’s protege.

Against the backdrop of the riots, the film explores how Dickie came to take over as boss from his father, Aldo ‘Hollywood Dick’ Moltisanti, and made his Italian stepmother (Michela De Rossi) his own ‘goomar’ (Mafia slang, as all Sopranos fans know, for unmarried mistress). 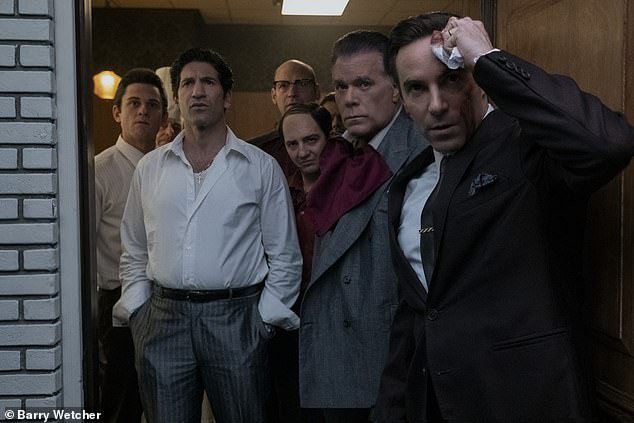 In another cute piece of casting, Aldo is played by Ray Liotta. It is one of many conspicuous links with Martin Scorsese’s 1990 masterpiece Goodfellas, in which Liotta starred. Really, Goodfellas was the crime swamp from which The Sopranos rose, and admirers of both will clock the references.

As for the film’s intriguing title, it refers to the expiation Dickie seeks for at least one of the terrible deeds he commits.

He craves salvation even as he tries to strengthen his criminal empire, which is threatened by an African-American former associate, the ambitious Harold McBrayer (Leslie Odom Jr).

All this unfolds as slickly and compellingly as devotees of the television saga will expect, with a great period soundtrack, not to mention the sexism, misogyny, racism, homophobia and extreme violence to which we became rather worryingly inured.

It won’t be for everyone, to put it mildly. But for those who relished and cherished The Sopranos, it hits all the right notes.

Verdict: Will ‘peak’ your interest

This fascinating documentary tells the story of Marc-André Leclerc, an insanely intrepid 23-year-old Canadian climber undaunted by any rock face or, indeed, vertical sheet of ice.

Even Alex Honnold, subject of the Oscarwinning Free Solo, tips his cap to Leclerc (left), a maverick ‘alpinist’ described even by his girlfriend as ‘super socially awkward’, who until recently free-climbed the world’s most formidable peaks in almost complete obscurity, doing it not for the kudos, just the very private satisfaction.

The film is directed in a spirit of awestruck admiration by climbers Nick Rosen and Peter Mortimer, who also narrates. And that’s fine, because Leclerc deserves the attention, even if he doesn’t always relish it.

Mind you, a British audience will be just as intrigued by a talking head here; a gregarious veteran climber from the North of England, still with a broad accent, who is considered the ‘unofficial mayor’ of the mountain settlement of Squamish in British Columbia, and goes by the curious nickname of ‘Hevy Duty’. I want to know more about him.

When a virile but enigmatic young hero sets off on horseback through a medieval England shrouded in mist, you’re watching either a cider commercial or yet another interpretation of Arthurian legend. The Green Knight (15, 130 minutes) is the latter.

David Lowery’s fantasy has been rhapsodically greeted in some quarters, even acclaimed as a masterpiece. It moves far too laboriously to get that kind of lavish endorsement from me, but it does have a good deal going for it, above all its inventive writerdirector, whose 2017 film A Ghost Story really was a small masterpiece.

For a man from the American Midwest, Lowery is quite happy to plunder stories from this side of the Atlantic. His next film is Peter Pan & Wendy, and we can expect that, too, to overflow with whimsy. There’s plenty of it here, along with an intriguing cast led by Dev Patel (above) as Sir Gawain — who was immortalised in the epic poem Sir Gawain And The Green Knight, written anonymously in the 14th century.

Alicia Vikander, Joel Edgerton and Sean Harris also feature, as well as the suddenly ubiquitous Ralph Ineson in the other title role — as the forbidding Green Knight, a supernatural monster who, having had his head lopped off by Gawain, promptly challenges him to a rematch a year later, at somewhere called the Green Chapel.

The accents in this version of Olde England are all over the place; there are enough regional overlaps to call it Gawain And Stacey. But if this unusual film has a scene-stealer it’s the compelling Irish actor Barry Keoghan, credited simply as the Scavenger, a scallywag Gawain encounters on his search for the Green Chapel.

As for Patel, he seems to be growing as an actor before our eyes. He used to give 20 per cent too much, but if anything he underplays Gawain, making him seem all the more mysterious, even when he steps out of the mist.

In cinemas from today; also available on Amazon Prime Video.