Caught Up in the College Admissions Scandal: Stanford’s Boathouse

REDWOOD CITY, Calif. — A Stanford sailor arrived at the university’s gleaming boathouse to clean out her locker at the end of the school year. The doors would not open.

“Did they change the locks again?” she said with an air of exasperation.

It was a reasonable question. In March, when the sailing coach John Vandemoer was fired after being snared in a nationwide admissions scandal, the locks were changed at the Arrillaga Family Rowing and Sailing Center. In April, they were changed again, after the men’s rowing coach Craig Amerkhanian was mysteriously fired — late in the season, weeks before his planned retirement.

Stanford’s boating troubles stem from the work of William Singer, the private college consultant who collected millions of dollars in payments from wealthy parents and paid college coaches and athletic administrators to designate non-athletes as recruits for admissions purposes at elite universities. In some cases, the college coaches pocketed the money. In others, Singer, who goes by Rick, made donations to the athletic programs.

Stanford is investigating the scope of the wrongdoing. It has hired the law firm Simpson Thacher & Bartlett to review how its athletes are recruited and how athletics-related gifts are accepted.

The university has reviewed email accounts, phone records and computers of coaches and athletic department staff. It has acknowledged that Singer contacted other coaches at Stanford — Amerkhanian among them. At least one parent indicted in the scandal, a Canadian businessman, also contacted Amerkhanian to discuss a recruiting spot for his son. Stanford maintains it has not unearthed any other cases of admissions fraud, however.

“Stanford is strengthening its internal controls and processes in an effort to prevent something like this from happening again,” E.J. Miranda, a university spokesman, said in a statement. 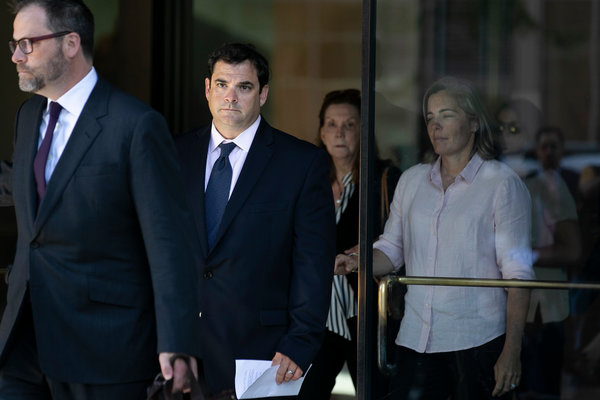 That Stanford is in this position is startling. It has a $26.5 billion endowment and prides itself on achieving athletic excellence without sacrificing integrity. But the turmoil in these two modestly financed athletic programs, along with another pair of dismissals, has resulted in what has long been seen as the ultimate sin at Stanford — sullying the university’s reputation.

“You didn’t do anything that could tarnish Stanford’s name,” Jay Kehoe, a former head sailing coach, said. “That was definitely the culture.”

When Vandemoer, wearing a navy suit and holding his wife’s hand, walked into a Boston courthouse for a sentencing hearing last month, the lawyers on both sides sparred over the extent of the damage done to Stanford’s reputation.

Since the scheme was revealed in March, federal prosecutors have brought criminal charges against more than 50 people, including coaches, Hollywood actresses and prominent figures from the worlds of law and finance.

Vandemoer, who pleaded to conspiracy to commit racketeering, was the first to be sentenced: six months of home confinement for receiving more than $600,000 from Singer in exchange for designating applicants as sailing recruits. The best-known case involved a student from China whose parents paid Singer $6.5 million.

Vandemoer, who put the money from Singer into a fund that supports Stanford’s sailing program, lost his job and his Stanford housing. He now lives at the vacation home of a Stanford benefactor and coaches privately, at a club run by his wife, just a few hundred yards from the Stanford boathouse.

“Stanford is a place that I love,” Vandemoer told reporters last month in front of the courthouse. “I have brought a cloud over Stanford, and for that I’m deeply ashamed.”

The sentencing capped a turbulent few months at Stanford. In March, a week before the admissions scandal broke, James Shirvell, an admissions officer, was fired after the police charged him with the attempted murder of his girlfriend while under the influence of LSD. Stanford’s president, Marc Tessier-Lavigne, and provost, Persis Drell, vowed to review the applications Shirvell judged “to assure his assessments were sound.”

Then, in April, Stanford abruptly fired two longtime coaches: Shannon Turley, who oversaw strength and conditioning for all varsity sports, and Amerkhanian, who had planned to retire in August, after his 19th season.

In an interview, Turley, who had been praised for reducing injuries, especially among football players, declined to comment on his firing. But he said that “for any errors of judgment that I may have made at Stanford, I can sleep well at night knowing that I did everything in the best interest of the student-athletes.”

Stanford takes great pride in its athletics program, which for the 25th consecutive year won the N.C.A.A.’s Directors’ Cup, the award for overall excellence. The university is also notoriously tight-lipped about personnel matters. Few people were aware of why any of the coaches was dismissed.

“Stanford athletics is a really cold, calculating, bureaucratic organization,” said the Olympian Silas Stafford, a rower who graduated in 2008. Noting how Amerkhanian’s firing was publicly described as a retirement, Stafford said: “I would call it cowardice. If there’s really dirt, let it see the sunlight. If there’s not, let him go out in style.”

When Stanford was informed last week that multiple people had told The New York Times that Amerkhanian had been dismissed, it acknowledged he was given a choice — retire or be fired — for violating employee behavior policies. Stanford said the violations came to light this year, but refused to specify if they were spurred by the federal investigation or if they were gleaned from the scrubbing of computers and phones.

Tall, lean and boisterous, Amerkhanian often used an air horn to get his rowers’ attention and leaned on Springsteen lyrics and historical references for inspiration, like commemorating the Rev. Dr. Martin Luther King Jr.’s Selma to Montgomery march with a 54-mile row.

His firing, on April 18, stunned the Stanford rowing community, which had been planning to honor him at a retirement barbecue at the boathouse nine days later, to coincide with the annual Big Row against the University of California, Berkeley. Organizers scrambled to find another venue, but attendees described the event as awkward, with Amerkhanian complaining that he was a victim of Stanford’s post-scandal vigilance.

For years, Amerkhanian and Vandemoer operated out of a contemporary boathouse on the edge of San Francisco Bay named for the developer John Arrillaga Sr., a former Stanford basketball player and one of the university’s largest benefactors. His children, John Jr. and Laura Arrillaga-Andreessen, attended college and graduate school at Stanford.

Inside the two-story, 16,500-foot facility, sculls are stacked in four bays on the ground floor, while a fifth is set aside for sailing. Upstairs, along with million-dollar views of the Santa Cruz Mountains, the Bair Island Ecological Reserve and the bay, are rowing machines, stationary bikes and weights, along with a kitchen, laundry room and offices.

If sailing requires mental and physical dexterity, reading the wind and the opponent, and moving decisively on a small boat, then Vandemoer, 41, was a fitting avatar: short, serious, hardworking and quiet, with dark sunglasses and a Red Sox cap typically pulled tight over his brow out on the water.

Conversely, rowing requires long levers, brute strength and fierce determination to push through searing pain on the water. If experience is crucial in a sailboat, rowers can be made — and over the last 15 years, few have cranked out Olympians like Amerkhanian.

But some former rowers and Stanford coaches said Amerkhanian could also be territorial, abrasive and a bully.

Stanford suspended him for three months and stripped him of his title as director of rowing during the 2010-11 school year, after a joint Pac-10 and Stanford investigation found violations of school policies, conference rules and abuse of authority, according to what the then-athletic director Bob Bowlsby told rowers at the time. Bowlsby, now the commissioner of the Big 12 Conference, declined to comment other than to say the discipline wasn’t connected to admissions.

“He was always a square peg in a round hole in the bureaucracy of Stanford,” said Stafford, who credited Amerkhanian with molding him into an Olympian.

A problem Amerkhanian and Vandemoer had in common was the cost of competing against colleges in the Northeast. In the 2018-19 school year, the sailing team made 15 trips east of the Mississippi River.

According to Department of Education data on operating expenses, Stanford spent $182,000 on its sailing program in 2017 — more than any school other than Boston College, and nearly double what Yale and Georgetown spent. But Vandemoer said in an interview before his sentencing that his budget did not include equipment; his biggest fund-raising need was to replace a fleet of 18 sailboats — at a cost of about $120,000 — every five to eight years.

The rowing teams don’t travel as frequently — or as far — but they have a major expense that the sailors do not. They must transport their boats, which can run up to $80,000 for a carbon fiber shell, to races.

Though Stanford said its coaches do not have fund-raising benchmarks, the external pressures to finance these programs were touched on in letters supporting Vandemoer to the judge who sentenced him. A parent of two Stanford sailors noted that the team stayed at his house in Annapolis, Md., to save money.

In addition, Joseph W. McCoy, a Stanford alumnus and avid sailor, wrote: “I am not at all surprised with how such low-profile and poorly funded sports like sailing, soccer, rowing, etc., became such easy targets in this rather ingenious criminal operation that created this mess.”

Singer, who was known among Silicon Valley’s rich and well-connected parents, sought coaches at Stanford and the University of Southern California to join his scheme. If he had more success at U.S.C., it was not for his lack of trying at Stanford, which acknowledged that Singer had contacted “several” coaches. Singer met Vandemoer in 2016, but several years before that he had asked Amerkhanian what he needed. The coach replied: Six-foot-five, 1,500 SAT and 4.0 G.P.A.

One parent who approached the coach was David Sidoo, a Vancouver businessman. He has pleaded not guilty to paying Singer at least $200,000 between 2011 and 2013 to hire a test administrator to take the SAT in place of each of his two sons and a Canadian high school graduation exam in place of his older son.

Sidoo discussed the possibility that at least one son, Jordan, a coxswain in high school, be recruited to Stanford. Amerkhanian mentioned the student to admissions, according to people who have talked to the former coach.

Jordan went to Cal, and was on the rowing roster for at least one season before graduating in 2018. But Cal is now investigating, and has noted that evidence of fraud may lead to diplomas being revoked.

A lawyer for Sidoo, Martin G. Weinberg, described his client’s interactions with Amerkhanian and Stanford as “nothing outside of what parents of students do.”