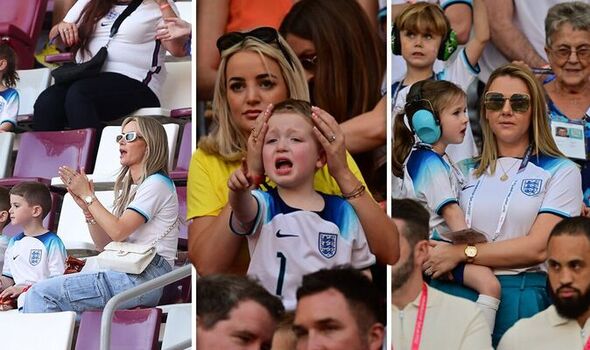 Wives, girlfriends and family members have been spotted in the crowd supporting England over their win against Iran in the Qatar World Cup with all putting on a very animated display during the Three Lion’s epic win.

Wives, girlfriends and family members have been spotted in the crowd supporting England over their win against Iran in the Qatar World Cup.

Harry Kane’s wife Katie made sure to take centre stage supporting England’s captain along with their young children: Vivienne, Louis and Ivy.

Conor Coady’s wife, Amie could be seen cheering on her husband alongside their three young sons: Henri, Freddie and Louie.

Amie also took to Instagram to share a snap with her children before entering the stadium, showing their support for Conor.

Phil Foden’s girlfriend, Rebecca Cooke, could also be pictured putting on an animated display as she supported her partner from the sidelines.

Harry Kane’s wife Katie was joined by her three children: Vivienne, Louis and Ivy. She looked great in her England top, paired with navy blue trousers as she held one of the couple’s children as she looked on. Her daughter wore blue headphones along with other children to shield the noise of the loud Qatar stadium.

Conor Coady has three children with Amie called Henri, Freddie and Louie. She took to Instagram today to share a picture of herself with their children outside the stadium, as they showed their support.

Phil Foden’s mother and girlfriend were also in attendance

Phil Foden’s mother Claire and his girlfriend Rebecca Cooke were overjoyed when the footballer took to the pitch for the game. They were also joined by children who were part of the Foden family, including his son Ronnie who sat next to Rebecca.

Jordan Pickford’s wife Megan looked very stylish in yellow as she sat watching the game with their son on her lap. He did not however wear large blue earphones, leaving Megan to shield her crying son’s ears from the noise.

Annie Kilner could be seen shielding her face at the game with large black sunnies as she supported her husband Kyle Walker from the sidelines.

Jack Grealish’s girlfriend Sasha Attwood was also pictured cheering on her boyfriend alongside his family in the audience. She arrived with fellow WAGs last night for today’s match against Iran.