Diddy and his girls were in attendance for Dolce & Gabbana’s epic three-day fashion event to help kick off the Venice Film Festival!

Sean “Diddy’ Combs’ three teenage daughters Chance Combs, 15, and 14-year-old twins D’Lila Star and Jesse James Combs are already fashion icons! The trio turned heads as they stepped out in Venice, Italy for Dolce & Gabbana’s glamorous evening event on Saturday, Aug. 29. The girls all wore D&G for the soirée, which was held at the historic Piazza San Marco and attended by their dad’s ex-girlfriend Jennifer Lopez, 52, Heidi Klum, Bebe Rexha and more A-Listers. D’Lila and Jesse looked so much like their late mother Kim Porter as they matched in multi-colored printed dresses with below-the-knee skirts. 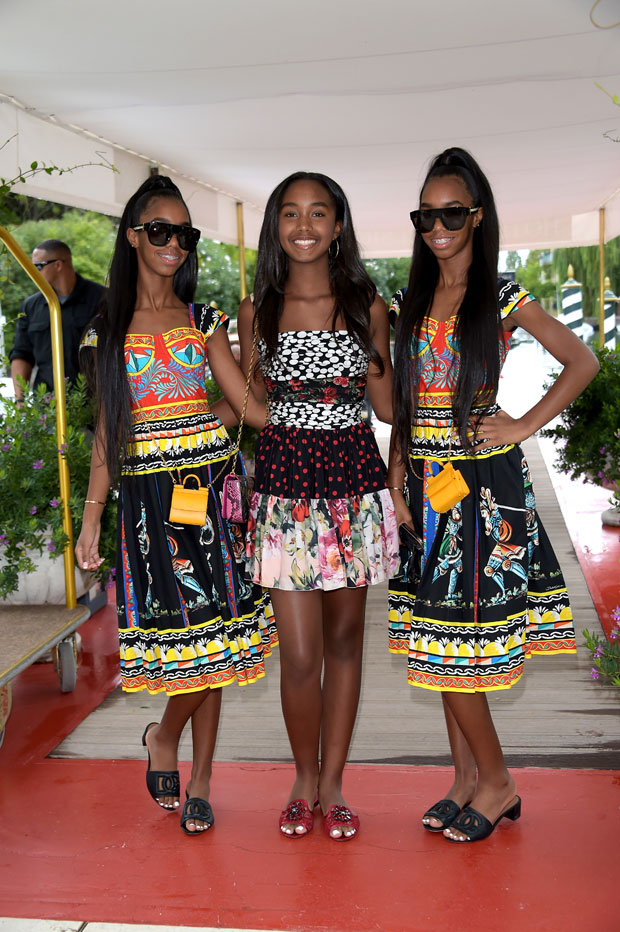 The twins kept their hair partially back into half ponytails, accessorizing with bright orange micro bags and black sunglasses. They finished their ensembles with a pair of black D&G logo slides, similar to the burgundy pair older sister Chance rocked. The 15-year-old mirrored the style of the twins, but boldly decided on her own look, looking gorgeous in a multi-print mini that included polka dot, rose, and pink floral prints. The patch-work style on all of the ensembles is signature to the Italian luxury labels’ style, particularly their latest collection.

Upon their arrival to Italy, Chance, D’Lila and Jesse were spotted wearing matching leopard dresses as they explored the history city with Diddy. Once again, the twins opted for a slightly longer length while Chance — who’s mom is Diddy’s former stylist Sarah Chapman — owned her own style with a short version. She also rocked a cream colored clutch while the twins went for a matching black ones.

The trio are becoming major fashion influencers following their cover shoot with Diddy for Vanity Fair last month! Diddy and his girls looked like absolute royalty as they posed for photographer Carlos “Kaito” Araujo. In a behind-the-scenes video filmed on-set, the “Been Around The World” rapper revealed he was “so proud” of D’Lila, Jesse and Chance. “I’m so proud of my Queens. They did such a great job on the @vanityfair shoot,” he gushed on Twitter.. “I’m so proud of you girls!! You all look simply regal, majestic, beautiful & strong. Words can’t even explain…I’m one of the luckiest men in the world!! LOVE.”