For the Second Half, the Yankees Have a Short Wish List: Pitching

Even when the Yankees were in London to play the Boston Red Sox at the end of the June, General Manager Brian Cashman could not focus entirely on the moment. He was having trouble sleeping one night with the five-hour time difference, so at 1:30 a.m. London time, he fired off text messages to rival general managers back in the United States who were surprised to hear from him while he was in Europe.

“I don’t want to miss any time even though we’re in a whole other continent,” Cashman said.

No matter his location, Cashman is on the hunt for pitching. He knows an upgrade is needed for what lies ahead in the Yankees’ second half, which begins on Friday against the Toronto Blue Jays, and in October, should they reach the postseason.

“It’s a long season,” he said. “And with the offensive explosion in the game, it’s even longer now.”

After a trying but stellar first half of the season, the Yankees are in an enviable position. They overcame injuries to 22 players, several of them stars, to post a 57-31 record, the best in the American League and second to only the Los Angeles Dodgers (60-32) in the majors. They are six and a half games ahead of the Tampa Bay Rays (52-39) in the A.L. East, and nine games ahead of the defending champion Red Sox (49-41). The Yankees’ .605 winning percentage against teams .500 or better was tops in baseball.

“This has really been an unbelievable season,” Hal Steinbrenner, the Yankees’ principal owner, said recently.

“It’s these young guys and the veterans and some of the new signs, like D. J. and others — they’re the reason we’re here,” he added later, referring to D. J. LeMahieu, a Yankees All-Star infielder. 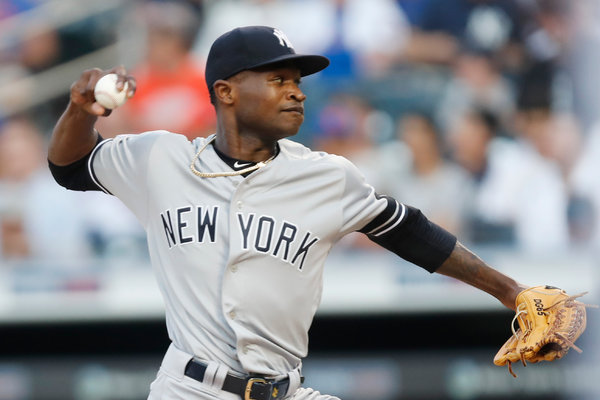 Underwhelming pitching was a primary reason the Yankees fell to the Red Sox in the playoffs last year. It was why the Yankees spent $108 million in the off-season on starters C. C. Sabathia and J. A. Happ and relievers Zack Britton and Adam Ottavino, and traded for starter James Paxton.

(Meanwhile, the starting pitcher the Yankees whiffed on signing this winter, Patrick Corbin, has shined with a 3.34 E.R.A. in just over 113 innings for the Washington Nationals.)

Luis Severino, the team’s ace, has not thrown a pitch this season because of confounding shoulder and latissimus dorsi injuries. Jonathan Loaisiga, expected to provide depth for the rotation, has been out since early May with a shoulder injury. Paxton and Sabathia have also dealt with knee injuries. German faces an innings cap but could be a weapon in the bullpen if the Yankees acquired another starter.

The steadiest force in the rotation has been Masahiro Tanaka, who despite failing to wield his best arsenal of pitches throughout the season, has a 3.86 E.R.A., pitched a team-high 105 innings and was named to the A.L. All-Star team.

The Yankees built their pitching staff this year according to modern sensibilities, prioritizing quality over quantity in the rotation and filling the bullpen with top relievers.

Where the rotation has been lacking — with a 4.22 E.R.A. (12th in the majors) and an average of five innings per start (tied for sixth lowest) — the Yankees’ high-scoring offense and talented bullpen have picked up the slack. Even with long injury layoffs for sluggers like Giancarlo Stanton (knee), Miguel Andujar (shoulder) and Aaron Judge (oblique), the Yankees’ offense was tied with the Minnesota Twins for the most runs per game (5.72) because of the hitting of Gio Urshela, Luke Voit, Gleyber Torres, Gary Sanchez and LeMahieu.

Despite the Yankees’ guidelines on limiting the overuse of relief pitchers, like avoiding using them three days in a row, the best ones have pitched a lot. Aroldis Chapman, Tommy Kahnle, Ottavino and Britton are on pace to match or top their career highs in appearances this year.

This is where the absence of the star Dellin Betances (shoulder and latissimus dorsi injuries) and the struggles of Jonathan Holder (6.81 E.R.A. before his demotion to Class AAA) and Chad Green (5.68 E.R.A. and a stint in the minor leagues) are felt most deeply.

“Clearly, we feel we need to fortify the pitching,” Cashman said. “Some of that will come from within, when guys get healthy.”

He added later: “But I’d certainly like to add to it if possible. But saying it and being able to do it to the level that you’d like are two different things. We’ll stay engaged with the marketplace, see what might be available and see if we match up better with other people that are trying to do the same.”

Teams will be motivated to act sooner this season. With the elimination of the August waiver trade period, teams will need to make their moves by the July 31 trade deadline. The Yankees already added a hitter, Edwin Encarnacion, last month. Will a pitcher, or two, be next? It seems likely, but other reinforcements are coming, too.

The Yankees hope that all three will return this season, perhaps beginning in August.

“We’re only going to be adding more pieces as guys get healthy and once the trade deadline comes around,” Judge said. “We can only improve from here.”