The GMA star – who is also the face of This Week with George Stephanopoulos – was told of the passing of his colleague, Dax Tejera, who was the executive producer of his show.

Dax passed away from a heart attack aged just 37, with the news being announced to ABC by the network’s News President Kim Goodwin on Friday.

She announced “with a heavy heart and great sadness” that Dax had passed away from a heart attack on Friday night.

The executive producer is survived by his wife Veronica and their two young daughters.

He joined ABC News in 2017 as a senior producer before being promoted to the executive producer of George’s show.

On the official This Week Twitter account, the program re-tweeted footage of Rachel Scott reporting on tragic passing of Dax, telling viewers that the news had left ABC News “shocked and hurt” following the passing of their “friend and colleague” and that their thoughts were with Dax’s wife Veronica and their two young daughters.

The video clip was accompanied by the following message: “@RachelVScott reports on the sudden passing of Dax Tejera, the Executive Producer of @ABCThisWeek.

In a memo to employees, @ABC President Kim Goodwin said that Dax’s passion and love for the show shined every Sunday morning.” 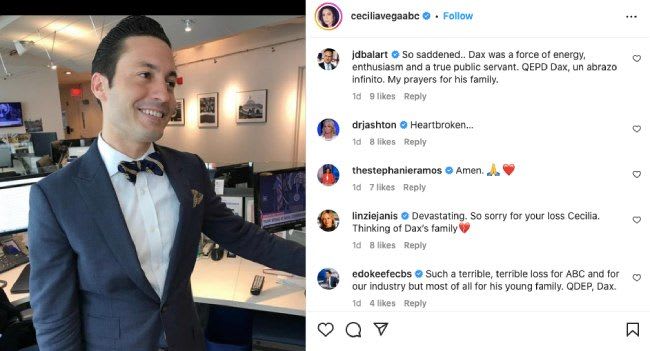 The program has been anchored by George since 2012, and has a large fanbase. As well as hosting This Week,

George is also a familiar face on Good Morning America, and is one of the main anchors alongside Robin Roberts and Michael Strahan. He has been working alongside Robin for 13 years – the longest-running TV partnership to date.

Away from work, George loves nothing more than spending time with his wife Ali Wentworth and their daughters. The family have been living in a beautiful apartment in the Big Apple since 2010 after relocating from Washington D.C.

George Stephanopoulos has been working on GMA for over a decade

The family moved after George landed his role on Good Morning America, where he replaced Diane Sawyer. At the time, Ali opened up about the exciting but daunting move to the Big Apple.

She opened the doors to her apartment to Architectural Digest and explained: “No more than a tiny percentage of our possessions would fit into a New York apartment,” and added: “I wondered how we could evolve beyond our humble domicile toward a more sophisticated home.”