George Takei, Karamo Brown, Jameela Jamil and others are angry that lawmakers got early vaccine access ahead of frontline workers 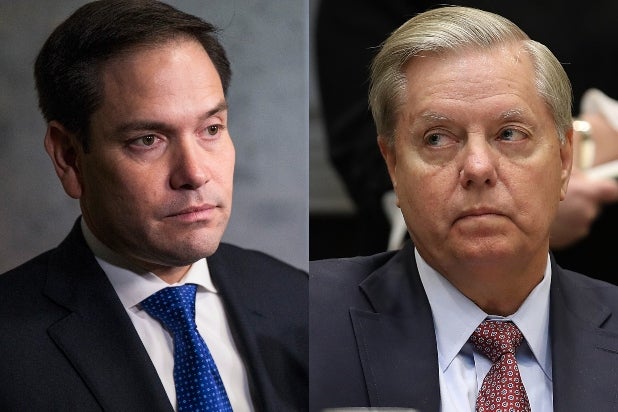 Over the weekend, senators Lindsey Graham and Marco Rubio posted photos of themselves getting inoculated on the very same Twitter accounts they downplayed the coronavirus and encouraged unsafe gatherings.

“There are very, very few instances of known allergic reactions to the Covid-19 vaccine, but Marco Rubio has always thought of himself as one in a million so there’s still hope,” sneered actor George Takei.

Actor Billy Baldwin fumed, “Lindsey Graham and Marco Rubio getting COVID-19 vaccinations first is the equivalent of men who dressed as women in order to escape the sinking Titanic.”

Television host Elizabeth Vargas wrote Sunday, “I have tweeted about how moving it was to see all those doctors and nurses getting these first vaccines. It still is. But I am also angry watching lawmakers who denigrated the dangers of this virus and mocked mask wearing, now lining up to get one before my 84 yr old dad can.”

Karamo Brown of “Queer Eye” mused, “Republican f*ckers who spent the last 8 months politicizing the coronavirus, telling their constituent not to wear a mask, that it’s a hoax… getting the vaccine before front line workers, health care providers, teachers, etc. just pisses me off! Lindsey Graham & Marco Rubio.”

Brown’s use of the expletive was in itself a dig at Rubio, who was roundly lambasted after he complained last week about inappropriate language from government officials. Rubio tweeted Wednesday, “Biden talks about unity and healing, but you want to know what they really think? Read how the person he wants as the next WH deputy chief of staff called Republicans in Congress a bunch of f***ers.” (Incoming deputy chief of staff Jen O’Malley Dillon did, in fact, use that word in a Wednesday interview with Glamour.)

Jameela Jamil targeted another GOP lawmaker — Iowa senator Joni Ernst — in an expletive-led tweet with the hashtags #frontlinefirst and #coviddenierslast.

“No Bible verse is going to save Marco Rubio from the beating he is taking for cutting to front of line to get COVID-19 vaccine,” quipped lawyer David Uhlfelder. Uhlfelder, who walked Florida beaches dressed as the grim reaper to protest their reopening amid the pandemic, criticized Rubio’s vaccination ahead of many frontline workers, too, adding, “Marco Rubio is a healthy 49 year old. He is not in a nursing home. He is not a health worker. He is not a first responder. He attends Superspreader events maskless.”

The lawyer also pointed out that GOP Sen. Lindsey Graham got a vaccine in spite of refusing to take a COVID-19 test before a debate against his primary opponent in the 2020 election, leading to the debate’s cancelation.

Check out some of the reactions below: