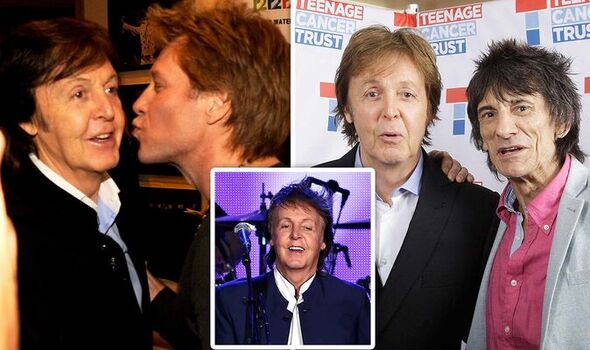 In view of his 626,000 followers, Ronnie shared a series of snaps which included the pair performing on stage, posing alongside Rod Stewart during the rocker’s wedding to Sally, and with Paul’s late wife Linda.

They posted a photograph of the singer that was taken by Linda the same year they got married.

On Thursday night, Jon Bon Jovi sang Happy Birthday to Paul when he surprised him on stage during a performance in New Jersey.

Clips shared to Twitter from the gig saw Jon walk onto the stage with balloons saying: “I know it’s somebody’s birthday!”

Clearly surprised, Sir Paul questioned: “Who’s that?” Before turning and greeting his friend with a hug.

The Livin’ On A Prayer singer then encouraged the audience to join in as he sang Happy Birthday to the star.

Elsewhere on social media, many more stars have shared tributes to Paul.

Piers Morgan posted a throwback snap of the pair with the caption: “Happy 80th Birthday, Macca!”

Beach Boys guitarist Al Jardine added: “Happy 80th Birthday Paul! Thank you for all the wonderful music you’ve given us and everything you’ve done to make the world a better place.

“You truly are an inspiration!!”

Actor Rob Schneider said: “’Let it be’ that Sir Paul McCartney knows that his musical generosity of spirit and love have forever changed the world with positivity, joy and screaming happiness.

“HAPPY 80th to the greatest entertainer who ever lived. May God bless you. You are a blessing for us all!”