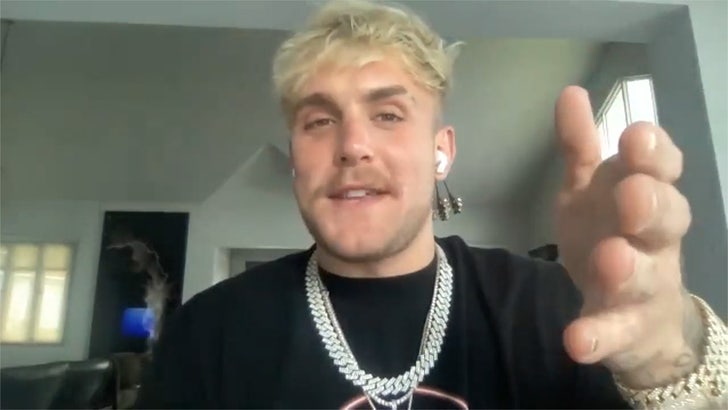 Now, don’t expect that to happen in the next few months … Jake knows he’s got serious work to do before he’s ready to try and step in the ring with the best pound-for-pound fighter in the world.

But, Paul says he’s taking the sport seriously, training hard — and believes he’s on a trajectory to be “the most disruptive boxer in the history of the sport.”

Of course, before he fights Canelo … Paul needs to get through former UFC champ Tyron Woodley when they throw down on August 28.

Jake tells TMZ Sports … he would like to add another MMA legend to the fight card that night — Anderson Silva.

Paul says he was incredibly impressed with the 46-year-old’s performance against Julio Cesar Chavez Jr. … and would love to see him face off against Roy Jones Jr.

We’re told Paul’s camp has reached out to both fighters in the hopes of getting them to agree to fight on his undercard. We’ll see what happens there.

And, get this … we’re told if those guys agree to a fight, Paul would considering fighting the winner at a future event.

Jake has taken the combat sports world by storm — he’s 3-0 as a pro with knockout victories over MMA star Ben Askren and ex-NBA star Nate Robinson.

Jake says the plan is to continue to take on “more serious opponents” and earn respect as a legitimate boxer. A victory over a respected fighter like Woodley would be huge for him.

As for Canelo, he just broke his last opponent’s face — and possibly ended the guy’s career.

So, yeah … he’s not one to be taken lightly.