Orlando Bloom sweetly helped secure the back of Katy Perry’s incredible purple dress before giving her a little kiss at ‘Variety’s Power of Women event in Beverly Hills.

Orlando Bloom, 44, showed the world he has his fiancee Katy Perry‘s back on the night of Sept. 30! The actor hopped up on stage while the singer, 36, was getting ready to sing at Variety‘s Power of Women event in Beverly Hills, CA and appeared to fix something on the back of her gorgeous Schiaparelli dress, which was long and had puffed out sleeves that ended just below her elbows and with the excess draped down. In the middle of doing so, he adorably kissed the top of one of her shoulders and gave her a smile before he went off on his way.

Before the cute eye-catching stage moment, Orlando and Katy, who was being honored at the event, posed for red carpet photos and looked so in love as they gazed into each other’s eyes. He looked handsome in a black blazer over a white button-down top and black pants and black boots and her blonde locks were pulled up, give her an elegant look.

In addition to enjoying each other’s company, Orlando and Katy were spotted chatting it up with Angelina Jolie and her 16-year-old daughter Zahara Jolie-Pitt, who were also at the star-studded event. The ladies even hugged each other at one point, showing off their friendliness. 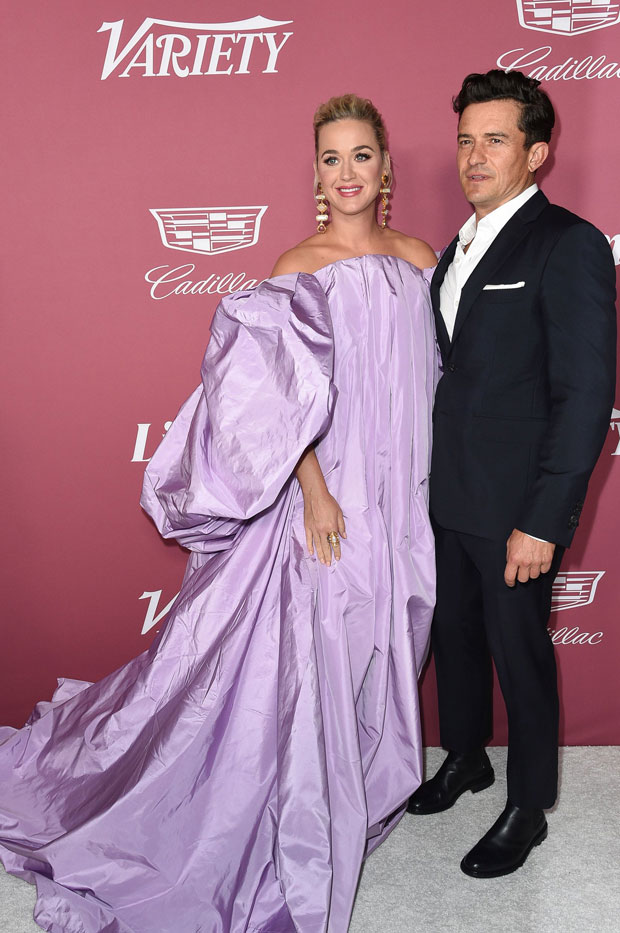 Once Katy was on stage, she made sure to mention Orlando, whom she called her “beloved partner and constant iron sharpener,” and their one-year-old daughter Daisy Dove.

“A man that is a friend and an ally to women all around the world,” Katy said about her husband-to-be. “Thank you for handling the insanity of my life with such loving grace. And biggest thank you of all for being an incredible father and example to our greatest gift ever, our daughter Daisy Dove.”

“To my Daisy, a future powerful woman,” she continued. “I pledge to you to do my best to be an example of one, to never put limits on your dreams, to lead with love never through fear and to always be your lighthouse in any darkness.”