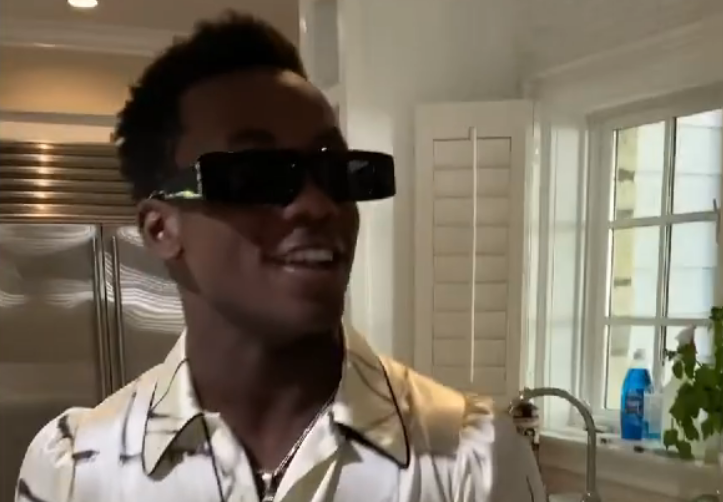 Madonna praised her son David’s ‘confidence’ as she shared a video online of him modelling some designer clobber.

The singer, 62, filmed David Banda turning their home into his own personal catwalk as he strolled around in a stunning Mae Couture silk dress with black letters printed all over it, teamed with white trainers.

In the video her teenage son, who she adopted from Malawi in 2006, struts with his back to the camera lowering his sunglasses before heading into the kitchen where members of his family can be seen hanging out.

She also posted some arty, magazine cover worthy photos of David posing outside in the sunshine with his shades on, pushing the boundaries as much as his superstar mum.

Madonna also has adopted children Mercy, Stella and and Estere, also from Malawi.

Speaking about her decision to adopt she shared with People: ‘It’s inexplicable… You look into the eyes of somebody, you feel their soul, you feel touched by them – that’s it.

‘Sometimes I would just close my eyes and just think, “Why isn’t my kitchen filled with dancing children?”’

Madonna, who has said in the past that adoption can be ‘complicated, but so worth it’, continued: ‘There’s so many children that need a home… I thought, “What am I waiting for? Just do it.”’

The 4 Minutes singer has spoken about David’s ‘focus and determination’ in the past, telling Vogue those are qualities she feels he has picked up from her.

‘He’s the one I have the most in common with. I feel like he gets me; he has more of my DNA than any of my children so far,’ she revealed.

For more stories like this, check our entertainment page.

Follow Metro.co.uk Entertainment on Twitter and Facebook for the latest celeb and entertainment updates. You can now also get Metro.co.uk articles sent straight to your device. Sign up for our daily push alerts here.