In Miss Juneteenth, from first-time director Channing Godfrey Peoples, Nicole Beharie plays Turquoise Jones, a young, hard-working single mother and ex-beauty queen who enters her teenage daughter in the Miss Juneteenth pageant in hopes of preventing her from making the same mistakes she herself once made. The pageant is part of a larger celebration of the Juneteenth holiday on June 19th, which commemorates the official end of slavery in 1865, two years after the Emancipation Proclamation. Here, Beharie reflects upon how she connected to her character and on the timeliness of the film’s release in the wake of the nationwide protest against racial injustice.

DEADLINE: What drew you to this project and how did it come across your desk? 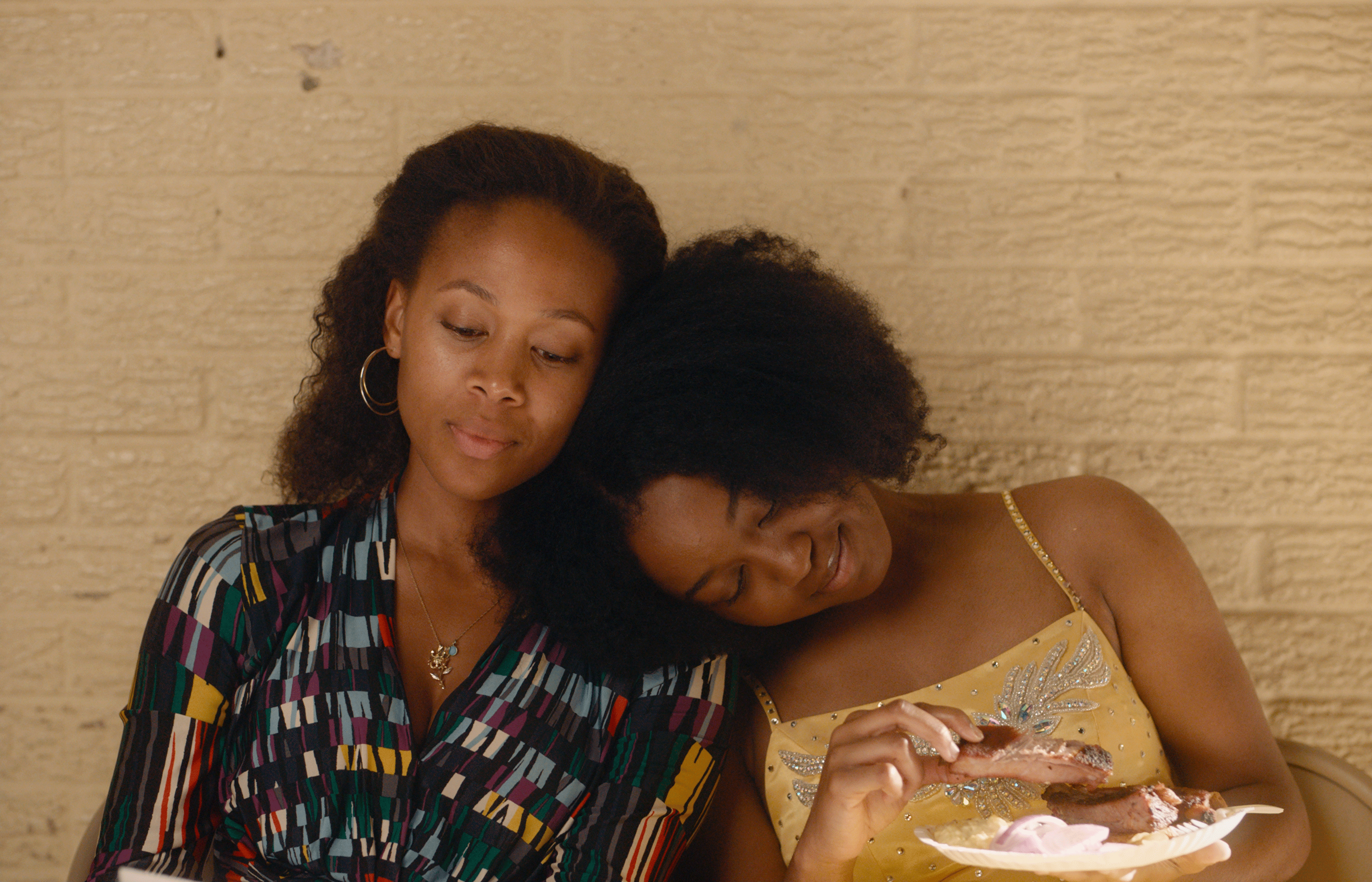 NICOLE BEHARIE: We read scripts, we see material and there are types or stereotypes or certain archetypes we see for women all the time. But with this one, I felt like there was a lot of heart. The relationships made sense to me, and they were multidimensional. I got a script and auditioned and sent a self-tape in. There was no offer. In fact, Channing wasn’t really sold I think on my first tape. She thought I was too young. So I took some notes and made a change to my read, which is something to all the actors out there: don’t get offended when somebody has notes. It’s an opportunity to try something new. And it ended up working out. And then once we had a conversation about her vision, and who these people were, I was like, “Oh, yeah. I’m totally on board for that.”

DEADLINE: What were your initial thoughts about who Turquoise is?

BEHARIE: My first thought was “tough”. This is a confession: oftentimes, it’s easy for me to be like other people write things, and they make it a certain kind of way. They see Black women in certain way. But I read it and I took it off the page and thought, Oh, she’s been in the hood, she’s done this, she did that. I lived in Atlanta, and South Carolina, and parts of Georgia and South Carolina in the rural South. So, I imagined some of the women in those spaces and went with my estimation of that. And then realized that there was an opportunity to still have that grip, but to also do something more tender with it.

So, the development of the character is a really interesting thing. It can start one way in read and then you realize, wouldn’t it be more interesting if she was vulnerable? She doesn’t have to be crying all over the place, but if you could feel her tenderness, and how much she loves her daughter. So, if someone is reprimanding you, it’s not the same as a naggy mom reprimanding you. It’s her heart, if you could feel her f—ing heart because she really loves Kai. Then it just hits different. It just feels different. That was something that Channing was very supportive of, and even started to encourage once we were working.  I just knew that it went from me seeing her as just tough and unstoppable and just pushing through, to, “Ah, there’s an opportunity for a lot of tenderness and humanity here other than that.” 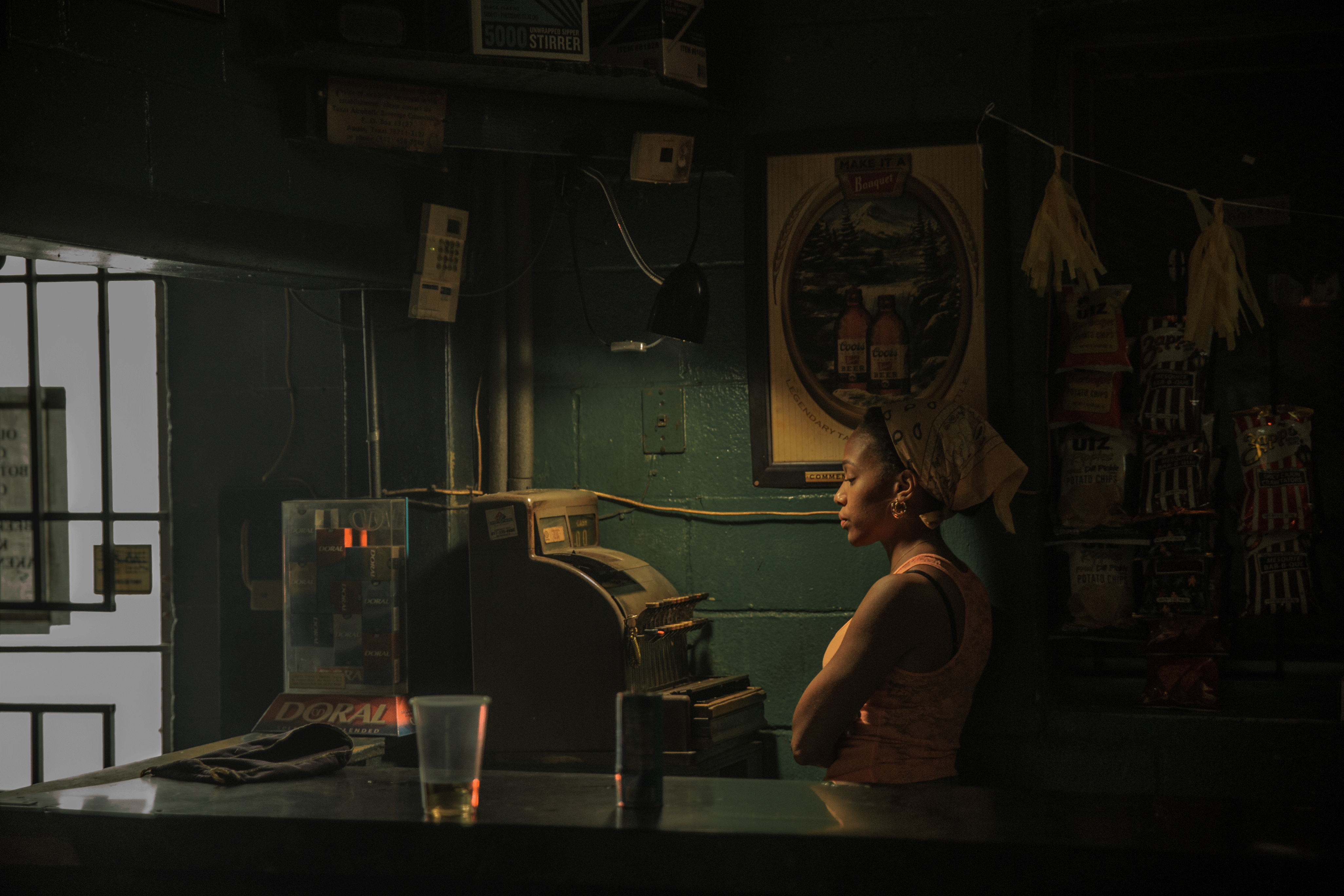 My sister was a young, single mom and there were people that were like, she could have done this and that. And she still went ahead and became a teacher, and is now one of the best teachers in Georgia. She is fantastic and is teaching other teachers how to teach. Her journey really influenced my desire to work on Turquoise. Because people underestimate you, or they say, “Oh, you had that one window of opportunity in your life, and if you don’t walk through the door at that point, then you’re nothing.” Especially for underrepresented people. This story presses up against all of those norms—social class, gender, race norms—and asks the questions in a really subtle way.

DEADLINE: Were you already familiar with Juneteenth when you came to the film?

BEHARIE: I had heard about it, maybe in college and school, working on a play or something, but it just wasn’t in the collective American consciousness in the way that I think it’s growing now.

The reason why a director and writer like Channing would want to tell the story about this woman, it’s not about this woman, it’s about the community. Like so many of the actors I’m working with, the people that you see on the screen are locals. To pay homage to communities that support us, and that rear us, and that teach us all of these values, good or bad, antiquated or not. But they are the thing that you really have. One of the things that I took from this piece was seeing my director being supported by the community in creating this. And as the character, realizing that there was such a strong root system and foundation, whether it was the Jenkins committee or HBCU, those strong foundations of history and the shoulders that you’re standing on, that kind of thing. Even though we don’t really beat you over the head in the movie, it’s really there.

It’s about a pageant, that’s galactic in nature, for young Black women coming into their own, and learning how to speak for themselves, and what their talents are, and who they are on the planet. I just feel like I walked away with, “Wow, community is a good thing.”

DEADLINE: This film came out, not only commemorating the 155th anniversary of Juneteenth, but also at a time following the murder of George Floyd, and the mobilization of the Black Lives Matter moment once again. What does it mean for you personally, that this movie came out when we’re having these heightened conversations about representation, diversity and the marginalization of Black people? 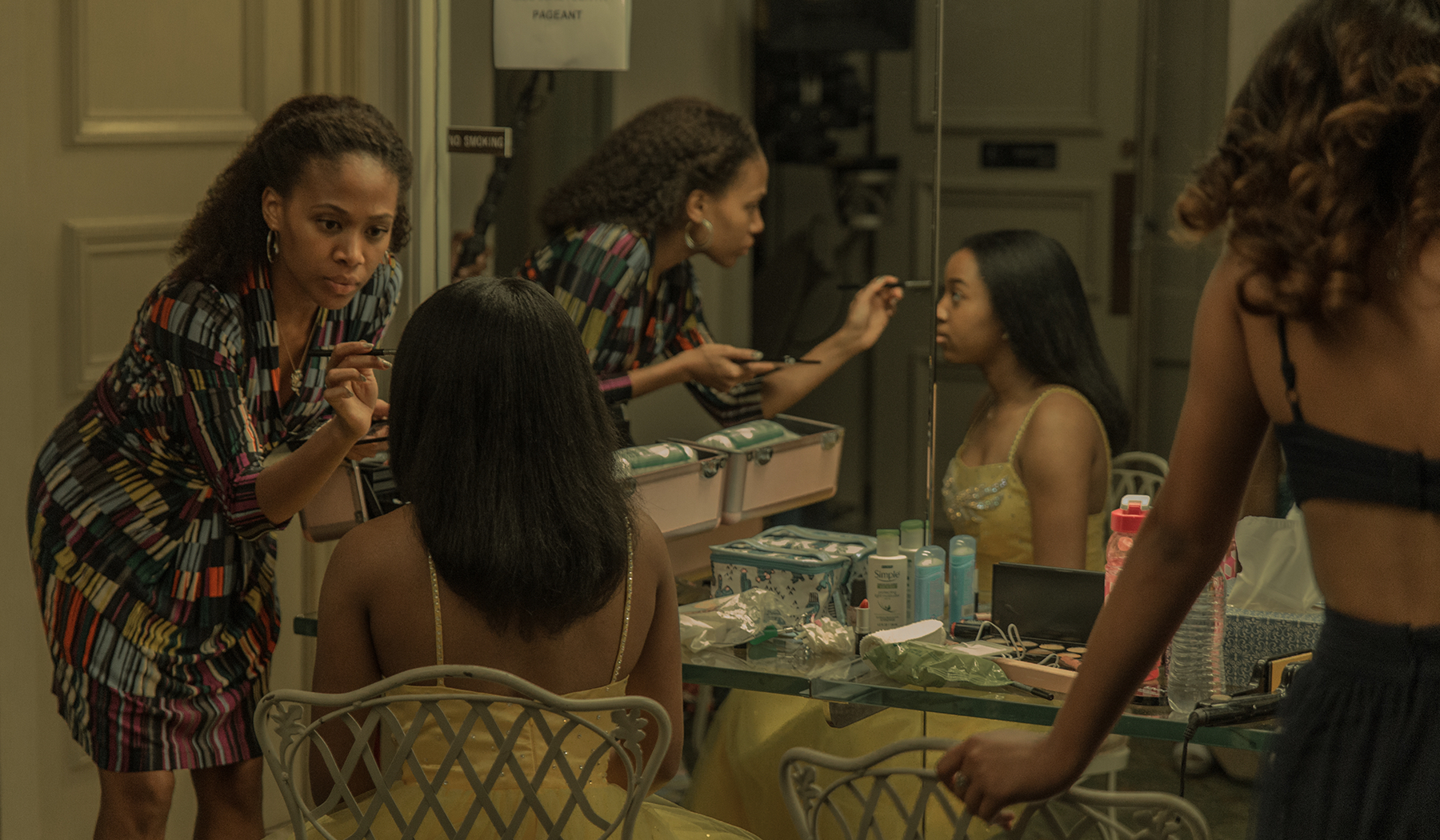 BEHARIE: It would be nice if the conversations were unnecessary. But sometimes we hit an alignment. Unfortunately, we were all in our homes witnessing what had been going on for hundreds of years. Collectively, everyone saw that. Everyone, even internationally, had their responses to it and could no longer ignore it. I felt like, just having even the smallest tipping of the hat to the ancestors, and to Juneteenth, to the freedom that came late. It was definitely a huge moment in American history—that was the official ending of slavery. It’s definitely something to commemorate.

More than my participation in it, I feel like artists, someone like Channing, when something comes to them, and it doesn’t make sense, and they’re like, “I got to do it this year,” she kept saying she had to do it. I was there on board, but sometimes you never know why. So, it’s a shout out to follow your heart and you never know why something is on your mind.

DEADLINE: We saw a lot of studios and networks get on board with Black Lives Matter, and recognizing Juneteenth as a paid holiday. Do you have faith that we are actually going to see meaningful changes in the Hollywood system?

BEHARIE: I’m cautiously optimistic. I’ve worked on two projects since [the coronavirus pandemic] came to our doorstep, and I’ve noticed shift in the way that they are hiring behind the camera and in front. I hope that it lasts and that it benefits all people. It’s nice to see Asian Americans and to see trans people, a little bit of everything. This feels like a representation of the planet that I live on.

What’s exciting as well, because of the time period, is that with the innovation in technology, for example, we got a film, which wasn’t necessarily going to be in a ton of theaters but probably got more eyes on it because of streaming.

People from all kinds of walks of life, I’m seeing all this material come out that’s bold and interesting. And they’re taking the opportunities, taking the bull by the horns, running with it, and also speaking about the ways in which they’re not being adequately paid. So, I am optimistic. I feel like that’s the only way I can call it.

DEADLINE: You’ve talked in previous interviews about taking time off partly due to health reasons. How do you reflect on that break now? 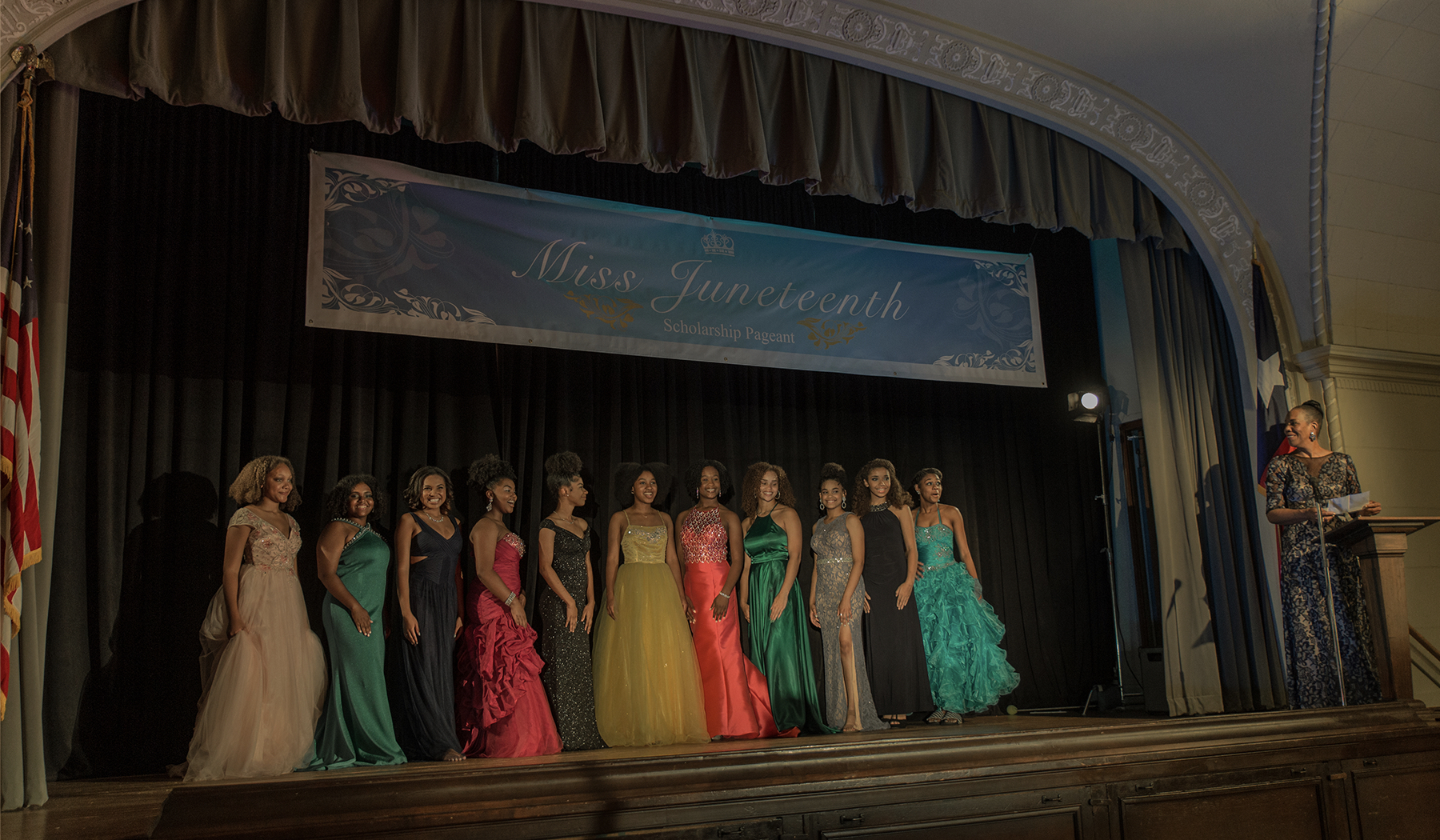 BEHARIE: Little things like just gratitude for being alive and healthy and loving what you do. So much of being an actor is insecurity, like, “Did I do it well? Is that what they wanted?” And rejection and all that stuff. And then when you’re dealing with health stuff, which is better now, you’re just happy to be here. It puts things in perspective. I’m grateful to be doing the thing that I love. Also, this year has shown us that you just never know what’s going to happen. How the world can shift. So, who you spend your time with, who you work with, the kind of projects you want to do, that’s all important. And so, I think that’s the thing that I’ve matured into.

DEADLINE: Lastly, as this crazy year is coming to an end, what are you looking forward to next?

So many people were stuck in their homes and I feel like there’s going to be like an explosion of interesting creative stuff coming out of this year. So, I really can’t wait for that. I’ve written a script, and I’m collaborating with a friend on another thing, so I’m looking forward to developing that side of myself and taking in all the glorious stuff that is going to be coming. Because I know it’s coming.