The Senate minority leader, who voted “not guilty” at Trump’s impeachment trial, explained his actions in Wall Street Journal op-ed 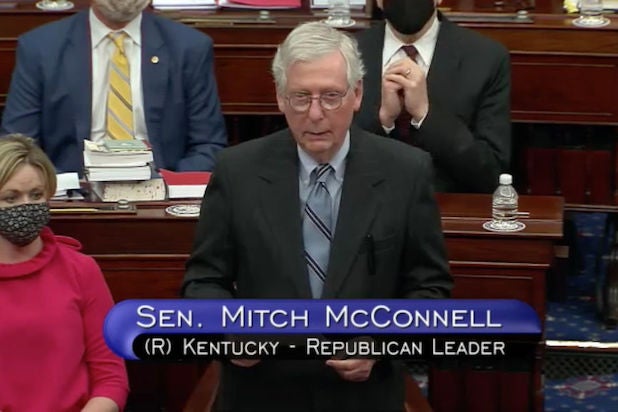 Senate Minority Leader Mitch McConnell said former President Donald Trump “bears moral responsibility” for the attack on the U.S. Capitol on Jan. 6 but defended Trump’s acquittal as being a protection of the Constitution’s limits.

In a Monday op-ed published in the Wall Street Journal, McConnell — who voted “not guilty” on Saturday on the last day of Trump’s impeachment trial — said he did not believe the Senate had the ability to convict a former official and that was the reason why he did not vote to convict Trump.

“I was as outraged as any member of Congress. But senators take our own oaths. Our job wasn’t to find some way, any way, to inflict a punishment. The Senate’s first and foundational duty was to protect the Constitution,” McConnell wrote. “This doesn’t mean leaving office provides immunity from accountability. Former officials are ‘still liable to be tried and punished in the ordinary tribunals of justice.’ Criminal law and civil litigation ensure there is no so-called January exemption.”

The Republican from Kentucky also defended his decision not to recall the Senate between Jan. 14 and Jan. 20 to hold an impeachment trial when Trump was still in office.

“The salient date is not the trial’s start but the end, when the penalty of removal from office must be possible. No remotely fair or regular Senate process could have started and finished in less than one week. Even the brisk impeachment process we just concluded took 19 days. The pretrial briefing period alone — especially vital after such a rushed and minimal House process — consumed more than a week,” he wrote.

During his speech on the Senate floor last Saturday, McConnell spoke out against Trump’s involvement in the Capitol attack and defended his “not guilty” vote.

“President Trump is still liable for everything he did while he was in office as an ordinary citizen. He didn’t get away with anything — yet,” McConnell said. “We have a criminal justice system in this country, we have civil litigation.”

Zombieland star Abigail Breslin 'in shock' as father dies of Covid-19
We and our partners use cookies on this site to improve our service, perform analytics, personalize advertising, measure advertising performance, and remember website preferences.Ok