‘On My Block’s Jessica Marie Garcia spoke EXCLUSIVELY with HL about why Ruby and Jasmine should end up together, the sweet prom moment that got cut, and the show’s impact on her life.

Jasmine Flores is an icon. There’s no doubt about that. Jessica Marie Garcia brought her A-game once again as the beloved character in On My Block’s fourth and final season, which is available on Netflix now.

HollywoodLife spoke EXCLUSIVELY with Jessica about why she thinks Ruby and Jasmine are endgame. However, she hopes that they go through a “break” before coming back to one another. She also revealed her reaction to Ruby’s adorable prom-posal and a line that got cut from the final episode. Plus, she reflected on the legacy of the show. Read our Q&A below:

Ruby and Jasmine went through quite the roller coaster in the final season, but by the end, they were back together. Do you think they’re endgame?
Jessica Marie Garcia: I hope so. I think that they’re probably the only two in the world that will understand each other and be able to handle each other. But I think that it would be great if there was like some kind of break between them to explore other people because I do very much think that they’ve been there one and only in their lives, and I would love for them to get a little bit more experience and really appreciate who each other were for one another. But I do think they’re endgame, absolutely. I can picture their wedding. I can picture their children. I think that they are such a sweet, funny couple that is probably like a mess at the same time, but I think they fit perfectly together.

Jasmine got into Berkeley, but she had to stay in Freeridge and take care of her dad. Where do you think she ended up?
Jessica Marie Garcia: I think she went to community college because I feel like it was too late in the school year to really go for any other schools. So I picture her going to a community college because I feel like she can excel anywhere she goes, and I really feel like she found that in herself. But the realism of her having to stay with her father just hit me so close to home because I was taking care of my grandmother with dementia for a good part of my childhood and coming out to California, so I understood the sacrifices that you have to make for your family. That really hit me but also I just am so proud of her. She had to grow up really quickly, and the thing that I love about her and I just think our community, in general, is that we don’t abandon our family. We don’t just put them in a home and say, “Peace out, dad. I’m going to go live my life.” She takes it upon herself to be like, okay, I love my dad, and I’m the best person to take care of my dad. So hopefully she’s able to find some kind of caregiver that can come to the house, so she’s still able to go for her dreams. That’s what I’m hoping for with her, but it was tough. It was really tough during those scenes because it felt like such a question mark. Like, where does she go from here?

Where do you think she ended up career-wise?
Jessica Marie Garcia: It’s funny because I always think of her as the Latino Wendy Williams. I can see her having her own show or being an investigative reporter, something that’s not police-related. As much as we were doing all of that exploring, I want to take her out of that. I think she could do so much. She has such a great, infectious personality that I’m just hoping that she finds you know what it is that she wants to do and really goes for it.

The final season featured two heartbreaking deaths: Oscar and Abuelita. Which death hit you the hardest?
Jessica Marie Garcia: I felt Oscar coming. I think a lot of our audience did, too. It didn’t stop it from being incredibly painful, especially because it happened so quickly. Abuelita kills me. I was looking at the writers and I was like, “Really? We had to do this? This was necessary? Let’s just kill everyone off? What are we doing?” She’s the heart of our show, especially the relationship with Jamal and Abuelita. That is just friendship goals. That was really heart-wrenching. I hated that part of it. Again, with the realism, I get it. But it’s just that one hit me the most probably. 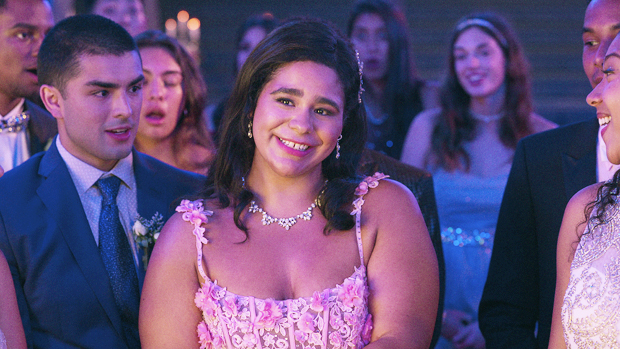 Ruby’s initial prom-posal was everything. And then Jasmine said no. What was it like filming that hilarious (and also heartbreaking scene)?
Jessica Marie Garcia: First of all, I never got to see the video until the show came out, so the whole time I’m just looking at a black screen just reacting to them just saying the words of what he’s saying. I never got to see anything. Getting to see it put together with all the pictures I was like, “Oh my god.” It broke my heart. I was really mad that she said no. I get it. She was just not in the mental place to really be a good date for him, so I understood why she said no but in front of the class? The Jessica in me was like, “What?” But I understood why they went that way, and I felt like she needed to earn a little bit of Ruby’s affection after she bulldozered him for some of the season.

Was there a particular scene of Jasmine’s that just really touched you? I think the moment when Ruby’s crowned prom king, and he asks Jasmine to dance with her… I felt that in my soul.
Jessica Marie Garcia: I felt like Pretty in Pink, Sixteen Candles vibes. That was Jasmine’s moment. It’s funny because we went through a few different dresses of what I was going to wear. I wanted that pink dress from the get, and they were like, “Just know, it’s really heavy. You’re going to have to be in this for like 4 days and wear it for like 12 to 14 hours.” I’m like, “It’s this dress. It’s this dress.” We had short ones and I was like “No, it needs to be a moment.” It’s funny because there’s a line that got cut out that I loved, and it’s when he gets crowned. He looks at the actual winner and goes to her and was like, “You may be the school’s beautiful princess, but you’re not mine.” And then he says, “Jasmine, will you dance with me” And I was like, “Why did you cut that out?” I loved it so much. I was rooting for Jasmine so much in that moment, especially all the fans of Jasmine who feel like that was their high school experience. I was really, really hoping that everyone saw themselves in that.

I’ve always felt like On My Block was underrated. I think that this show has done so much when it comes to the representation of Black and Brown communities on TV. What has that been like for you to be a part of this and to build something that resonates with so many people?
Jessica Marie Garcia: I mean, it’s changed my life. The show has single-handedly changed my life forever. And I owe it so much. I’m just so grateful to have been a part of a show that people like in general. It’s a rarity to get one season on the air. To be able to have 4 when we wouldn’t have even had a second season if it wasn’t for the fan reaction in the first place. It was just all word of mouth. We didn’t have a ton of marketing our first season, so it knocks me out the fact that people waited until midnight to watch the entire season. They’ve cried with us, and they’ve laughed with us, especially being a part of a show that I would have killed to have watched as a kid. I’ve been blessed to be in this business for a while, and for so many of the shows I’ve been on I’ve been the best friend to a white lead. The ability to have a show that’s just all people of color, for our stories to matter, and for the audience to also recognize that and see themselves in us is priceless. We’re just eternally grateful. It’s also hard to fathom that I’m a part of it. I didn’t even realize our reach. I just went to Amsterdam and my family joked, “Oh, you’ll probably not get stopped too much here. You’ll have a break.” That did not happen. So many people stopped me on the streets of Amsterdam, and I was just taken aback. I was like, wait, this is international. I don’t even recognize the reach that we have and what our show has. We’re such a little show that we’ve kind of been in our own little island for the last 4 years, so the fact that it’s so much bigger than us is bizarre.