Prince William’s relationship with his younger brother Prince Harry has been strained for a couple of years now, and it doesn’t appear as though things are going to improve anytime soon. Although the two were able to come together on July 1 for the unveiling of a statue of their mother at Kensington Palace, there is a lot of tension between them that has yet to get resolved. According to Insider, the brothers have been at odds since 2018. Since that time, Harry’s decision to step down as a senior member of the royal family and move to the United States has further divided him and William.

Couple that with Harry’s interview with Oprah Winfrey that aired back on March 7, and his sit-down with Dax Shepard for the May 13 episode of Armchair Expert, and there is even more stress on his relationship with William. The main reason? Harry continues to air out his dirty laundry on a public platform, which is something that upsets William — and the boys’ father, Prince Charles. It’s no secret that the royal family keeps personal things private, so Harry has sort of gone against the grain lately. And the media continues to report this as the reason for the growing rift between the brothers.

On July 2, a new report with quotes from royal expert Nick Bullen was published by Fox News, and Bullen claims that William is “furious.” Keep reading to find out why. 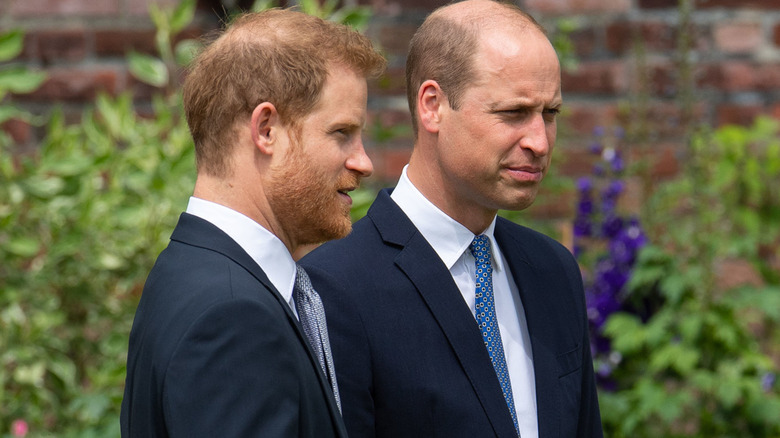 Nick Bullen told Fox News that it will be “very difficult” for Prince William and Prince Harry to reconcile. “It is still very much a work in progress. An awful lot has been said between the two. So much dirty linen has been put out in the public, so to speak,” he said. Interestingly, Bullen seems to have the same take as other royal experts. He claims that William is “furious” because Harry and Meghan Markle keep sharing private information about the royal family with the media.

“I am told William is absolutely furious at how Harry and Meghan have shared their views about the royal family, about their own immediate family, with the world’s press. I think it’s going to be incredibly tough to come back from that, on all sides. Harry and Meghan feel they haven’t been supported by the monarchy. But ultimately, William is a king in waiting. Duty to him comes first. His duty is to protect the crown and to protect the institution. And that’s what William is going to do,” Bullen told Fox News.

And while the two brothers appeared to be okay during the statue unveiling ceremony at Kensington Palace, it doesn’t appear as though they spent much time hashing things out. According to Hello! magazine, Harry is already back in Los Angeles less than 24 hours later.