The new trailer for Black Widow, the 24th film in the Marvel Cinematic Universe, expands on a lot of what’s already been shown. Natasha (Scarlett Johansson) in Russia with her “family” (fellow trained assassins played by David Harbour, recent Oscar-nominee Florence Pugh, and Rachel Weisz), and a whole lot of high-octane action. What’s new, though, is footage of Black Widow facing off against a mysterious masked figure, matching blow for blow. “Who is that guy?” she asks in the trailer, and the audience is meant to wonder accordingly.

That character’s identity is no mystery for anyone familiar with Marvel—it’s Taskmaster. But what role Taskmaster plays in this MCU—and who’s underneath that mask—are the greater questions bear wondering.

In the Marvel comics, Taskmaster is a villain who wears different hats at different times. Sometimes he’s a villain, sometimes an anti-hero, and sometimes just a mercenary working for whoever’s willing to dole out the highest dollar. He’s featured prominently in the Marvel universe ever since appearing in Avengers #195 back in 1980.

In the trailer, Taskmaster is hidden behind a chrome mask and visor; he’s seen mirroring Black Widow’s every move, and the comic history of the character can help to explain why. Taskmaster has that name, in essence, because he injected himself with a Nazi chemical that allowed him to get a superpowered learning ability; he absorbs fighting techniques, styles, and abilities just from looking at someone. In the comics, this has given him Captain America’s shield-throwing abilities and Hawkeye’s archery skills, among others. His weakness, however, is that the more information he takes in about others, the more he loses about himself. His personal memory is drained as time passes. 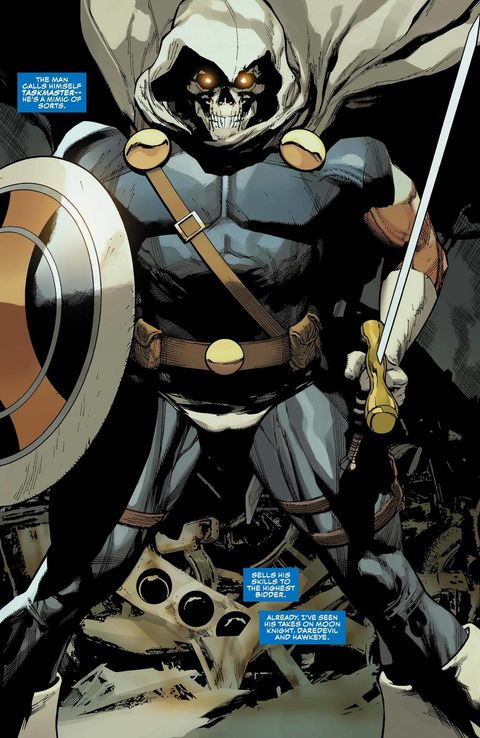 In the movie, we can assume that Taskmaster will be some form of this character, but we shouldn’t rule out a twist. For example, think back to the Iron Man 3 twist, when “The Mandarin” turned out to not be The Mandarin at all, or the ways the films have changed Vulture in Spider-Man: Homecoming.

Considering that an actor isn’t credit with playing Taskmaster on IMDB or at the end of the trailer, it’s fair to assume that the character is either a secret identity of someone we already know is in the movie, or an uncredited cameo from an existing Marvel character.

Some might think the character could be Jeremy Renner’s Hawkeye; that probably comes rooted from seeing Taskmaster shooting arrows out of a tank in the last trailer, but given Taskmaster’s power of being able to learn the abilities of others, having it actually be Hawkeye wouldn’t make a ton of sense. Plus, Black Widow is set between Civil War and Infinity War. We’ve already seen Hawkeye in Endgame, which of course takes place well after the events of Black Widow.

My money would be on the character being secretly Rachel Weisz’s character, Melina, who is supposedly another Black Widow. Based on what we see in the trailer, Taskmaster’s build is far too small to be David Harbour, and it seems like Florence Pugh’s Yelena is being set up for a bigger MCU future, perhaps even as Natasha’s successor. That leaves, Weisz, playing a mysterious character without a comic background that we know of.

Switching the character’s gender wouldn’t be that outlandish of a move, and granted some of the liberties we’ve seen from Marvel in the past, would actually be something that we could easily see coming.

Is Taskmaster the villain in Black Widow?

Another good question. The whole Black Widow trailer kind of gives off a Captain America: The Winter Soldier vibe, with our hero going up against some sort of super-powered agent of espionage that we don’t know much about. While Bucky/The Winter Soldier turned out to be an antagonist in that movie, he obviously wasn’t a true villain; if Melina is indeed the Taskmaster, that would follow a similar path. The characters could face off the entire movie, but maybe she has an epiphany at the movie’s climax that changes everything.

If Taskmaster is set up as an antagonist but not a pure villain, you can be sure that someone else will be set up as the movie’s actual villain; think Robert Redford’s Alexander Pierce character in Winter Soldier.

All we can do for now, though, is wait until Black Widow hits theaters in May. By that point, it’ll have been 10 months since the last MCU film, and quite frankly that’s plenty long enough.