The Home for the Hall of Fame, Nestled in the Past

COOPERSTOWN, N.Y. — Steve Pindar immediately spotted the problem on Thursday morning. The night security folks at the Baseball Hall of Fame had printed out two days’ worth of scores and standings, instead of just one, for him to post on a board in front of the museum. He double-checked for the proper date.

“Occasionally they don’t give us the right ones,” Pindar said, “so we go to our trusty phones.”

The Hall of Fame welcomes around 300,000 visitors each year, and nearly all, of course, carry a trusty cellphone with access to scores of any major league game, as well as the daily standings.

Yet every morning before 9 a.m., a Hall employee — usually Pindar, the museum’s visitor services coordinator — lugs a frayed, wooden tray filled with magnetic numbers and opens the back latch of a display case marked: BASEBALL SCOREBOARD.

Even the hand-operated scoreboard at Fenway Park has lights to show balls, strikes and outs. But here there are no advertisements, no tickers for breaking news, no ways to update games in progress. This is how baseball awakens each morning, and how it remains all day. 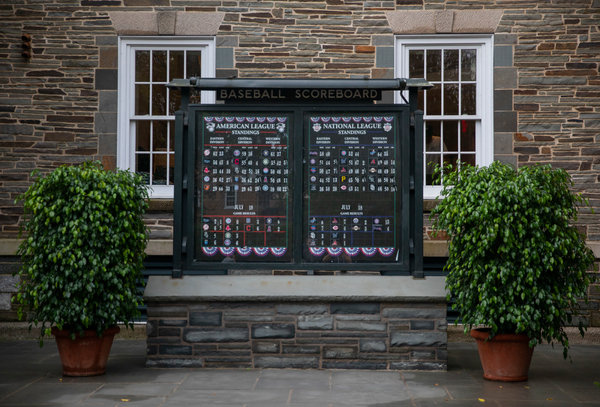 “What would it look like to have something with blinking letters and numbers?” said Ted Spencer, the former chief curator for the Hall of Fame, who updated the board in the 1980s and 1990s. “I still think it would be out of keeping with the look of the building.”

The board was closer to the street when Spencer worked here, and cars would stop in front of it in the morning for a quick check of the scores, including those elusive West Coast results that were too late to make the papers. The board is set farther back now, but it remains a prominent part of the sidewalk presentation for a building that opened in 1939.

Tim Mead, the new Hall of Fame president, posed for a photograph in front of the board last week with a family of Yankees fans; the picture wound up on the front page of the Cooperstown newspaper, The Freeman’s Journal. Mead, 61, lives six blocks from the museum and walks to work. He could not do that as a vice president for the Los Angeles Angels in Anaheim, Calif., where he had worked for 40 years.

On Main Street in Cooperstown, the past is the point. There are plenty of video displays and interactive exhibits within the museum; you can create your own baseball card and have it appear in your email inbox within seconds. But the whiff of nostalgia is unmistakable — so thick, as the James Earl Jones character in the film “Field of Dreams” might have said, that you have to brush it from your face.

“It has that Norman Rockwell-type feel for me,” the Hall of Famer Trevor Hoffman said Friday morning, before a clinic on a field near the induction site at the Clark Sports Center. “You’re out among the grass, you’ve got elbow room, it’s kind of the essence of where we play in these big cathedrals, and how beautifully manicured things are. This is where it starts, the grass roots.”

Travel delays kept Hoffman and Ozzie Smith, who ran the clinic, from arriving in town until around 3:30 a.m. on Friday. But there they were just a few hours later, in full uniform with their fellow Hall of Famers Jim Thome and Alan Trammell, teaching fundamentals and posing for photos. Nearly 60 Hall of Famers were expected to attend Sunday’s ceremony welcoming Mariano Rivera, Edgar Martinez, Mike Mussina, Harold Baines, Lee Smith and the late Roy Halladay to the shrine.

Many of the Hall of Famers sign autographs for a fee throughout the weekend, as does a lineup of others not inducted, an eclectic group that has included the notorious (John Rocker), the obscure (Pete LaCock) and the ubiquitous (Pete Rose, who is banned from baseball and therefore from the Hall of Fame).

This year’s induction crowd might challenge the record estimate of 82,000 for Cal Ripken and Tony Gwynn’s ceremony in 2007. For the locals who rent out their homes, the weekend can be lucrative. For those who stay, it can be a nuisance.

“The average Cooperstown resident is no more or less of a baseball fan than the average anywhere-else resident — and maybe less so, because of the impact it has on daily life,” said Jeff Katz, who served three terms as mayor, from 2012 to 2018. “But everyone is aware that baseball is what makes Main Street what it is. Any other village of 1,800 in upstate New York is not us.”

Katz is now president of Friends of Doubleday, which hopes to renovate Doubleday Field, the rickety 99-year-old ballpark on Main Street. The Hall of Famers gather there on Saturday every induction weekend to honor a writer and a broadcaster, and then board trucks for a parade to the museum.

State and local governments take pains to secure the parade: The garbage cans lock, and snipers patrolled the roofs last year. Even a bucolic village must be vigilant today, Katz said, but the essence of the weekend, and the Hall of Fame itself, is a reverence for things past.

Pindar, 67, has lived much of that history. He was born in Cooperstown, saw Mickey Mantle and others inducted here, and spent many years working for a local minor league team. He runs a charity named for Roberto Clemente that donates baseball equipment to underprivileged children. He keeps track of the Dodgers because their star outfielder, Cody Bellinger, has family in nearby Oneonta, where Pindar lives.

Pindar does not think he will need to move the Dodgers’ logo from its first-place perch atop the National League West column of his standings board. But if he does, some passers-by might be there to see him do it. And he would happily share in his work.

“I’ve had people stand and watch the whole process, and sometimes they’ll come around with their child and ask if he can change one of them,” Pindar said. “What are you going to say — ‘No’? For me, this is all about customer service. The little guy comes around, changes the score of his favorite team, they take pictures and off they go, happy, which is the way it’s supposed to be.”

Tyler Kepner has been national baseball writer since 2010. He joined The Times in 2000 and covered the Mets for two seasons, then covered the Yankees from 2002 to 2009. @TylerKepner