The Origins Of The Change My Mind Meme 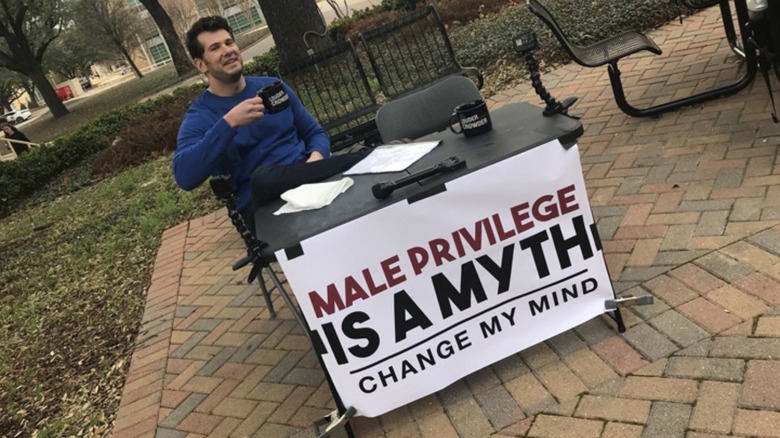 If you’ve taken even a cursory look at Twitter, you’ll likely be familiar with the prolific “change my mind” meme. The image in question sees a smiling man in a blue sweater sitting at a desk with a sign displayed on it, which reads, “Male privilege is a myth. Change my mind.” He’s quite literally sipping a cup of tea, too, with his own name (Steven Crowder) printed on it, which only sweetens the setup. According to BuzzFeed, Crowder, a conservative podcast host, first shared the image to Twitter (it’s since been removed).

The story goes that he went to a Christian university with the intent of finding out whether students there believed in male privilege and, if so, could they please prove it was real to him. Instead, he became an object of ridicule as people rushed to edit the photo so it seemed like Crowder was arguing over inconsequential pop culture stuff instead.

But how did the “change my mind” meme gain traction so quickly in the first place?

This is how the 'change my mind' meme blew up 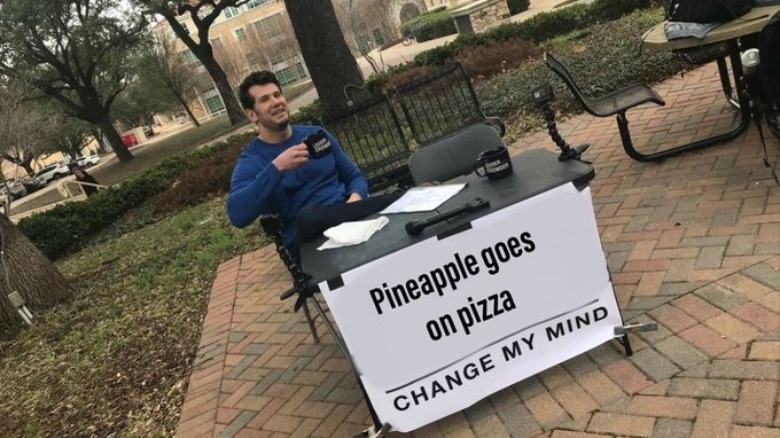 According to Know Your Meme, the original photo of Steven Crowder was taken at Texas Christian University and was shared online in February 2018 alongside the caption, “Hello @TCU. Come one come all. #ChangeMyMind.” Crowder has an active podcast and YouTube channel, on which he gives people with opposing viewpoints to himself the opportunity to, well, change his mind.

Crowder’s original post really caught fire, garnering over 900 retweets and 6,400 likes in just four days. The outlet claims that one Twitter user photoshopped the image to show a crying Michael Jordan (another meme, go figure) instead of Crowder, while another person changed the text to read, “The clitoris is a myth / Change my mind.” These jokes quickly gained traction while, over on Reddit, the r/dankmemes subreddit had a field day making fun of Crowder.

Another Twitter user made it even easier for people to take part in the meme-ification of the podcaster by providing a handy blank canvas for easy editing. Some of the funniest examples include whether pineapple belongs on pizza (a long-running argument on social media) and if it makes sense that bees can fly. The meme also went full-on meta after the image of Crowder was copy-pasted onto the board, before being used to proclaim its own redundancy. Suffice to say, the comedian got his wish by capturing social media’s attention for a short while, even if, in the end, nobody wanted to engage about Crowder’s original question.