PITTSBURGH — Charles Allie is 71 years old, and he is fast.

Chances are, he is a much faster runner than you are — faster, in fact, than you ever were. Last year in Spain he broke his own world record in his age group for the 400 meters by more than a second. That is essentially a quarter-mile, one lap around a standard running track. He crossed the tape in 57.26 seconds.

Plenty of people, even when they are at their fastest, never come close to running 400 meters in less than a minute. Allie has been breaking one minute since he was a child. Now, he beats his competitors — the other fastest men in the world who are his age — by 30 or 40 meters.

He set the world record in the 200 meters for the over-70 group last year, too. Still not impressed? At the World Masters Athletics Championships, he dropped down an age division and won two relay gold medals with the 65-year-olds. In that division, he ran faster than just about everyone except his good friend Bill Collins, who was a top American runner in the mid-1970s.

“I’m just addicted to speed,” Allie said at the kitchen table in his Pittsburgh home on a recent morning. He had eaten oatmeal and fruit for breakfast.

Track and field is a sport of outliers. Sprinters weren’t supposed to be 6-foot-5. Then Usain Bolt of Jamaica rewrote the record books. Breaking two hours for the marathon was long considered impossible. Now Eliud Kipchoge of Kenya is within 99 seconds of the mark. Jackie Joyner-Kersee’s world record in the heptathlon has stood for 31 years. 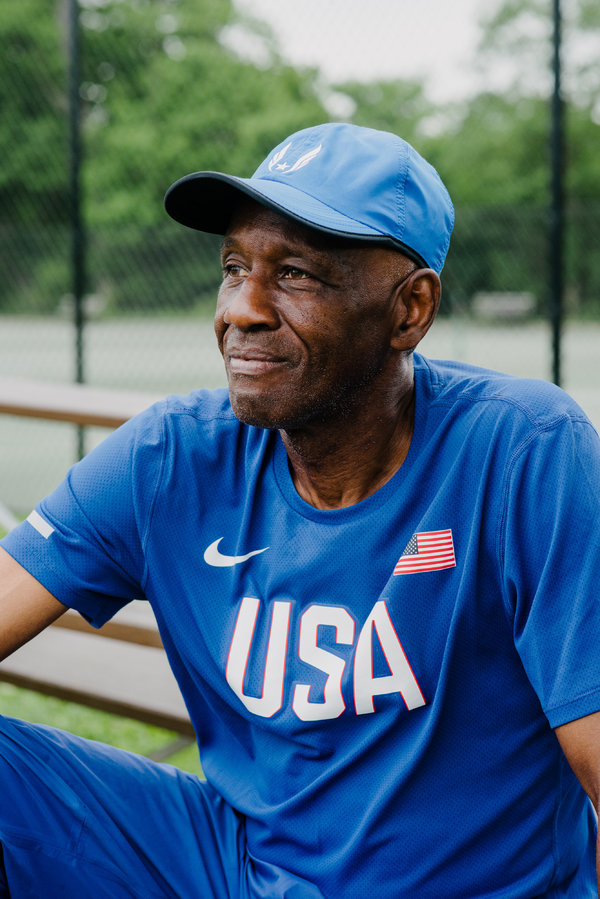 Allie is blessed with incredibly fast legs and a body that ages at a frighteningly slow rate. He said his weight has not fluctuated by more than five pounds in 25 years. He is rarely sick and has not had a major injury. He strained his Achilles' tendon in 2008. Right now, he said, he is dealing with achiness in his hip.

He is always training, but a little harder now. He wants to break the over-70 world record for the 100 meters, his weakest sprint event, this weekend at the masters national championships in Ames, Iowa. Last year he ran 12.81, missing the mark by four-hundreths of a second.

It is nearly impossible for someone at any age to hold the world records for the 100, 200 and 400 simultaneously. Some have held two of the three. Bolt, for instance, has the records in the 100 and the 200. Michael Johnson held the record for the 200 and 400. But people who can win at 100 meters generally run out of gas before the end of a 400, and quarter-milers don’t have the raw speed required to win at 100 meters.

“He’s going to get it,” said Collins, Allie’s teammate with the track club Houston Elite. “He just has to work a little more on his start, those first 10 yards.”

Collins, who is three years younger than Allie, describes him as “a once-in-a-generation athlete, kind of like Usain Bolt.”

“Being honored with him, that was something,” Allie said of Bolt.

Allie won city championships in high school in Pittsburgh. He attended Hampton University in Virginia, where he was a couple of clicks below national and world class. He competed in the occasional track meet in his 20s and 30s as he taught industrial arts and coached middle school sports.

Then he turned 40 and began masters competition. He found that he had lost less speed than his contemporaries: The pack had come back to him, and even fallen behind.

Michael Joyner of the Mayo Clinic, a leading researcher of exercise and physiology, said Allie’s performances put him at the very edge of the aging curve, in which athletic performance declines at least 6 percent per decade. But given all the injuries sprinters are susceptible to, Allie’s crazy-slow fade is even more striking.

“When you are running seven- or eight-minute miles, you’re not exploding your legs the way these guys do,” Joyner said. “Clearly he stayed fit.”

Allie eats healthfully and has run in the Penn Relays every year since he was 40. If he has two hard workouts in a row, he will take a day off.

“I need my rest,” he said. He also visits a Y.M.C.A. for weight training a few afternoons a week, trying to ward off the inevitable decline of fast-twitch muscle fibers.

Allie’s workouts are not long or complicated. He runs a slow mile to warm up. Then there are a series of 50-yard drills. Raising the knees high during one, making sure to whack his backside with his heel on every step during another. After that he takes a seat on the infield turf and laces up his track spikes. They are black Nikes, top of the line. It’s the thing he splurges on.

“I like a shoe that makes me feel fast,” he said.

The spikes, which weigh just a few ounces, are for his sprint intervals. He will perform a series of intervals that are a little longer than his races. Preparing for a 400-meter race, he will repeat 500- or 600-meter intervals. For the 200, the distance is 250 or 300 meters. Since he is focused on the 100, he decided on a recent morning to do 150-meter sprints.

Running next to Allie can be a humbling experience. From the moment he starts, he just goes away, sprinting off, as if on air. Septuagenarians are not supposed to go this fast.

Collins, his teammate and sometime competitor, said there are few people who can carry their speed through an entire race the way Allie does. In the quarter-mile, Allie’s time for his last 100 meters is almost exactly the same as his first. It’s why his nickname is One Speed, Collins said. “He can be winning by 30 or 40 meters, and he still doesn’t slow down.”

Allie’s wife, Jackie — they got together in middle school — films his races and posts them online. “I might be more into it than he is,” she said.

That is a good thing because none of this comes cheap. Masters runners, even the best in the world, pay their own way, though U.S.A. Track & Field recently started paying top runners $400 for each event at the world championships and $400 for each gold medal. The maximum payout in each age category is $1,000. Of course, Allie maxed out and collected $2,000 last year. They are given uniforms and other swag now, too.

Allie also coaches at Nadia, a track club in Pittsburgh. He said working with children, some as young as 6, helped keep him young.

They call him Coach Buddy. They travel to Philadelphia to watch him compete in the Penn Relays. If he misses a workout in the morning, he laces up his spikes and runs with them. Like everyone else, they can’t believe how fast he is.