A week after the show Loki introduced its vast audience to a version of the character Loki who is, well, an alligator, the show Loki kept the momentum going. Episode 5, titled “Journey Into Mystery” introduced another variant of a Marvel character—but this time instead of an reptile, it was an amphibian. Frog Thor, also known in certain storylines as Throg—yes, Throg—made his official MCU debut. And believe it or not, this is a character with background in the long, winding canon of Marvel Comics.

The Loki scene was quick. We say “blink and you’ll miss it a lot,” but this was literally a scene that maybe lasted one second if we’re being generous. After last week’s major credits scene cliffhanger—with Loki waking up post-pruning in a place we now know as The Void and meeting four new variant versions of himself—we got a bit of background this week. These Lokis are hiding underground, and are willing to take our Loki to hang out and drink Roxxi-Wine (or Hi-C in Kid Loki’s case). But while the gang was climbing down an underground ladder to get to their safe haven, we see one of the most fun easter eggs in MCU history hidden literally underground (and in an episode that included a new, ridiculously strong monster, standing out is quite the feat).

As the camera pans beneath surface level to follow our new crew of Lokis, we see some stuff literally nested within the dirt. At first, we see something familiar to any Marvel fan: Mjolnir. Yup, that’s Thor’s hammer just deep within the dirt. Just beneath the hammer we find the gold mine: a frog in a jar labeled “T365,”, wearing Thor’s traditional headgear and red cape. He’s jumping up and down in the jar, clearly trying to get at Mjolnir, and who the hell knows how long he’s been at it. Before we get too much of a glimpse to even think of anything more, the camera continues panning down, bringing us back to our Lokis. 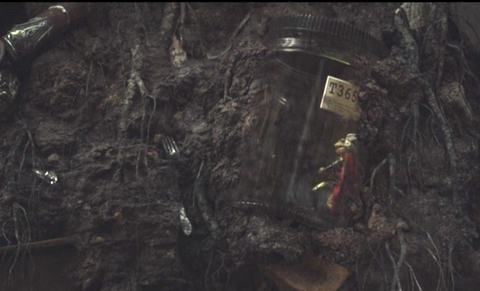 Now, before we move onto anything more…let’s just for one second talk about the idea of Mjolnir being nestled underground but on top of some sort of underground lair. Does that mean the soil is worthy? Because otherwise it would’ve just continued to sink to a solid grounded surface, right? Maybe Throg’s mere aura kept it afloat. Who knows. He’ll get there.

Anyway. That was all we got in this episode from Frog Thor/Throg. We did get a full episode’s worth of Alligator Loki, though (Including the backstory on how he ended up a variant, by eating the wrong neighbor’s cat. Yikes. Hope it wasn’t Goose from Captain Marvel!).

But in case you wanted a bit of background, it’s worth knowing that Frog Thor/Throg isn’t quite as random as it seems; it’s got all sorts of comic background.

Is Throg, or Frog Thor, a character in the Marvel Comics?

There are numerous instances of Thor (as in the main Thor) being turned into a frog. But for this specific instance, we’re instead going to look more closely at the character of Throg, who was first introduced into the Marvel Comics canon in Lockjaw and the Pet Avengers #1, a comic that came out back in 2009.

Essentially, this little story starts with a guy named Simon Walterson (a reference to comics writer Walter Simonson, who had a legendary run on Thor in the ’80s) who was a college football star who eventually was drafted to go pro. However, this was short lived; he had a career ending injury and wasn’t able to continue. Still, he found new meaning in life through charity work and his wife…until his wife died unexpectedly, and she turned out to be pregnant with his unborn child, too. Grim stuff.

That sent Simon into a deep spiral, when he sought out a witch in a way to talk to his wife in the afterlife. He was successful, but when he was unable to pay back the witch for her help, she turned him into a Frog. Simon became a frog full time, moved to Central Park in New York City, and started going by the name Puddlegulp.

Meanwhile, Thor (as in, again, the actual Thor) was on earth, and was transformed into a frog himself. There was all sorts of Loki mischief and nefariousness going on, but what’s important is that even as a Frog, Thor could still lift Mjolnir. Eventually, when fighting off some bad guys, Thor lifted Mjolnir and became the warrior we know, but a shred of Mjolnir broke off. Puddlegulp/Simon tried to lift the shred, and was surprisingly successful. At this point, he became Throg, Frog of Thunder and wielder of Frogjolnir.

Wild stuff. Wild, wild stuff. And now it’s (presumably? maybe?) all MCU canon. Who else is eagerly awaiting for the Throg Disney+ series?