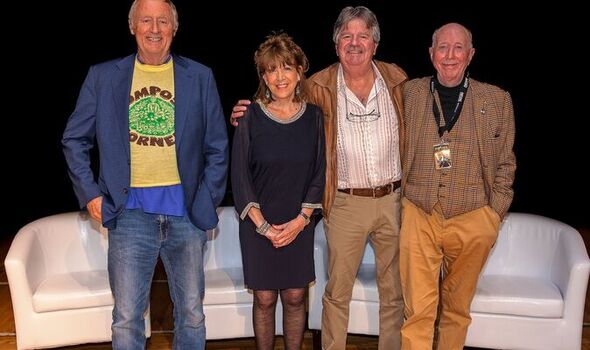 The children’s TV legends were joined on their trip down memory lane by fellow presenters John Gorman, 86, and Bob Carolgees, complete with Spit the Dog. The famous four – who had a 1980 chart hit as the Four Bucketeers with the Bucket of Water song – got back together at Bristol Slapstick Festival.

Tiswas pioneered anarchic TV for youngsters and the series ran on ITV on Saturday mornings from January 1974 until April 1982, fronted by future Who Wants To Be A Millionaire presenter Chris, now 75.

The regular hosts were often joined on screen by the likes of comedians Jasper Carrott and Lenny Henry for a variety of silly sketches and games.

At the Bristol reunion, Sally, 71, unmasked the show’s longtime mys- tery guest the Phantom Flan Flinger, who turned out to be retired Birmingham cabbie Benny Mills, 87.

Bob, 73, presented what he believes will be the final appearance of Spit The Dog – the puppeteer has carpal tunnel syndrome, which causes pain in his hands.

The foursome led the audience in a singalong of their song, with plentiful buckets of water, to mark 40 years since the final broadcast of Tiswas, which stood for This Is Saturday: Watch And Smile.

The rare gettogether raised money for the Children’s Hospice South West charity and the foursome were presented with Slapstick’s Comedy Legacy Medal for their achievements, following in the footsteps of the great comics of the silent movie era but with their own brand of humour.

Philip Schofield took to social media to celebrate catching up with his friend and former co-host Sarah Greene.

They posed for a smiley selfie, which This Morning host Philip shared on Instagram and wrote: “The best day, chats and hugs with this gorgeous human, love ya Sarah Greene.”

They last worked together in 2017 when ex-Blue Peter host Sarah, who’s TV star husband Mike Smith died in 2014, filled in on This Morning when Holly Willoughby was ill.