What to Watch Wednesday at Wimbledon 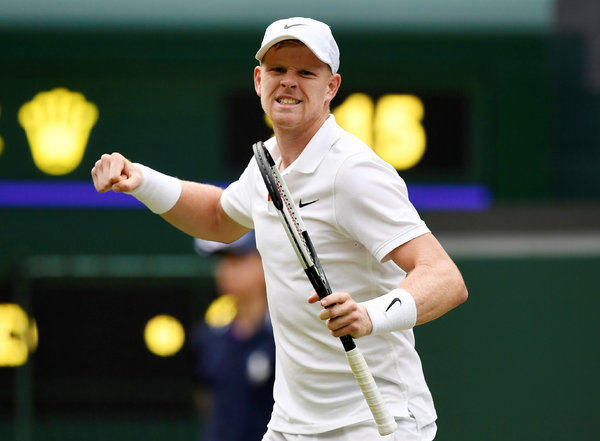 Edmund, the 30th seed and the top-rated Briton in the draw, will face the left-handed Fernando Verdasco in the second match on Centre Court. Verdasco reached the quarterfinals at Wimbledon in 2013, but has lost in the first round the past three years. Edmund’s best result was a third-round exit last year, but he looks capable of making a deeper run, having reached the semifinals at the Eastbourne International on grass last week.

Khachanov has had a particularly good year, reaching the quarterfinals at this year’s French Open. However, in both grass tournaments he played this year he has lost to Matteo Berrettini. Lopez’s year has gone in the opposite direction. A three-time Wimbledon quarterfinalist, López had a string of early losses through the first half of the year. On the grass at Queen’s Club, he won both the singles title and the doubles, alongside Andy Murray.

The last match on No. 1 Court will feature Wozniacki, the former world No. 1, in a repeat of her first-round matchup at the French Open. Kudermetova won that match in three sets, but will not be eager to face Wozniacki’s counterpunching abilities on the grass. Wozniacki has reached the round of 16 six times at Wimbledon, and her experience on the grass at 28 may be the deciding factor against the 22-year-old Kudermetova.

Sevastova reached the semifinals at last year’s United States Open and the round of 16 at this year’s Australian and French Opens. She produces a variety of shots that can work on any surface and make it hard for opponents to get into a consistent rhythm. Collins has also had a good year, reaching the semifinals at the Australian Open. She might have had a strong showing at the French Open as well had she not run into the eventual champion, Ashleigh Barty, in the second round.

Wawrinka, 34, has won three Grand Slams, one each at the Australian, French and U.S. Opens, while Opelka, 21, has played in only three Grand Slam tournaments. Still, Wawrinka can expect to have a hard time against the 6-foot-11 Opelka, whose game relies on a powerful serve that will be especially difficult to break on the grass if he can keep it in. Wawrinka will look to keep the ball low and construct longer points that will tire Opelka and affect his ability to place the ball carefully on serve.

After winning her first-round match against Venus Williams, the 15-year-old Gauff said, “My goal was to play my best.” With a victory over a five-time Wimbledon champion behind her, she will now face Rybarikova, who was a Wimbledon semifinalist two years ago. Although Rybarikova has struggled in the past year, her singles ranking dropping to 139th, she beat 10th-seeded Aryna Sabalenka convincingly in the first round. This will be a tough test for Gauff, as Rybarikova is able to disrupt even the most seasoned player’s rhythm.