Now that she’s announced her pregnancy, I think it’s time to take a little trip down memory lane to explore who Halsey has dated. ICYMI: Halsey announced she’s expecting a child on Instagram on Jan. 27. She made the revelation by posting a few breathtaking shots featuring her bare belly taken by photographer Sam Dameshek alongside the caption, "surprise! 🍼🌈👼🏻."

As for who the father is, that info is still TBD. Buuuut fans are thinking it very well might be her rumored boyfriend Los Angeles-based writer and producer Alev Aydin. And they have some compelling proof.

For starters, Halsey tagged Alev right on her belly in her pregnancy announcement post. Alev also shared her post to his story with a couple of red heart emojis. Aaand, as if all of that wasn’t compelling enough on its own, he commented on the post, "heart so full, I love you, sweetness." To that, Halsey replied, "I love you!!!!! And I love this mini human already!"

So, yeah. All of the above signs do seem to point toward Alev being the most likely father. But I’m still going to use this revelation as an excuse to take a looksy through Halsey’s A-List exes. 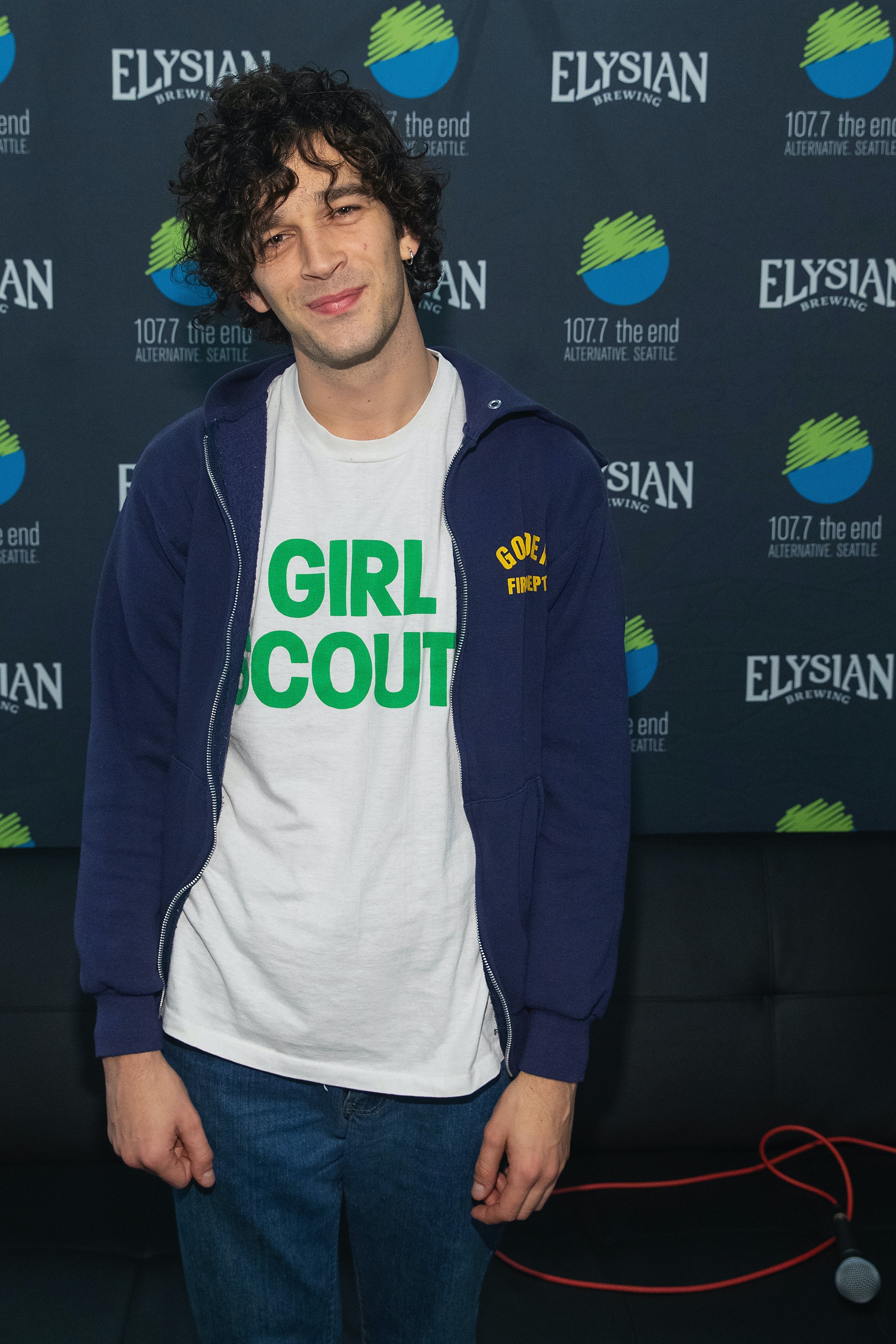 The 1975 frontman was by no means Halsey’s first boyfriend, but he was the first guy she was publicly linked to as fans guessed her 2014 album Room 93 was inspired by a rumored romance with Matty.

Halsey seemingly confirmed the two had some sort of romance when she was asked about the nature of her relationship with Matty in an August 2015 Billboard interview.

"We’re both attracted to characters, and we saw that in each other. I spent a lot of time watching him and he spent a lot of time loving being watched," she said. "But if you think he’s the first red-wine-­drinking, pretty-boy rocker in skinny jeans I’ve… been associated with, you’re out of your f*cking mind." 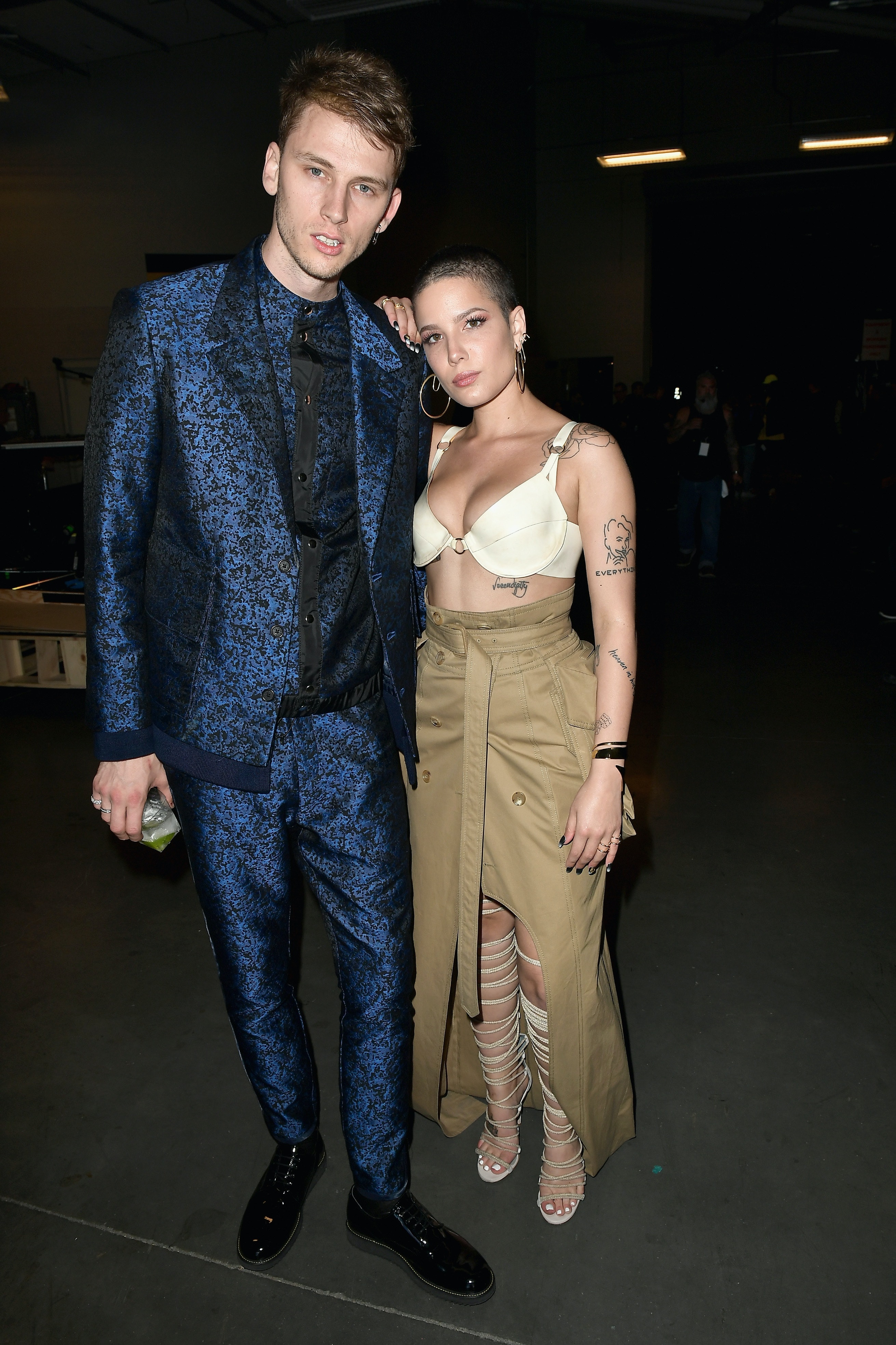 OK, this one is a little controversial. By that, I mean that I’m not totally sure whether or not Halsey ever actually had anything romantic going on with MGK.

The drama started back in 2018 when MGK appeared on The Breakfast Club. During the interview, host Charlemagne asked MGK if he "smashed G-Eazy’s girl." To that, MGK replied, "Yes, many of them!" When Charlemagne clarified that he was specifically referring to Halsey, MGK replied that he "absolutely" had been with her.

Halsey was having none of the gross locker room talk. Shortly after the interview aired, she tweeted:

That’s not necessarily a denial that they "smashed," but I’m going to take it as one.

Luckily, the two seemed to have squashed their beef since then as they recorded "Forget Me Too" together in 2020. 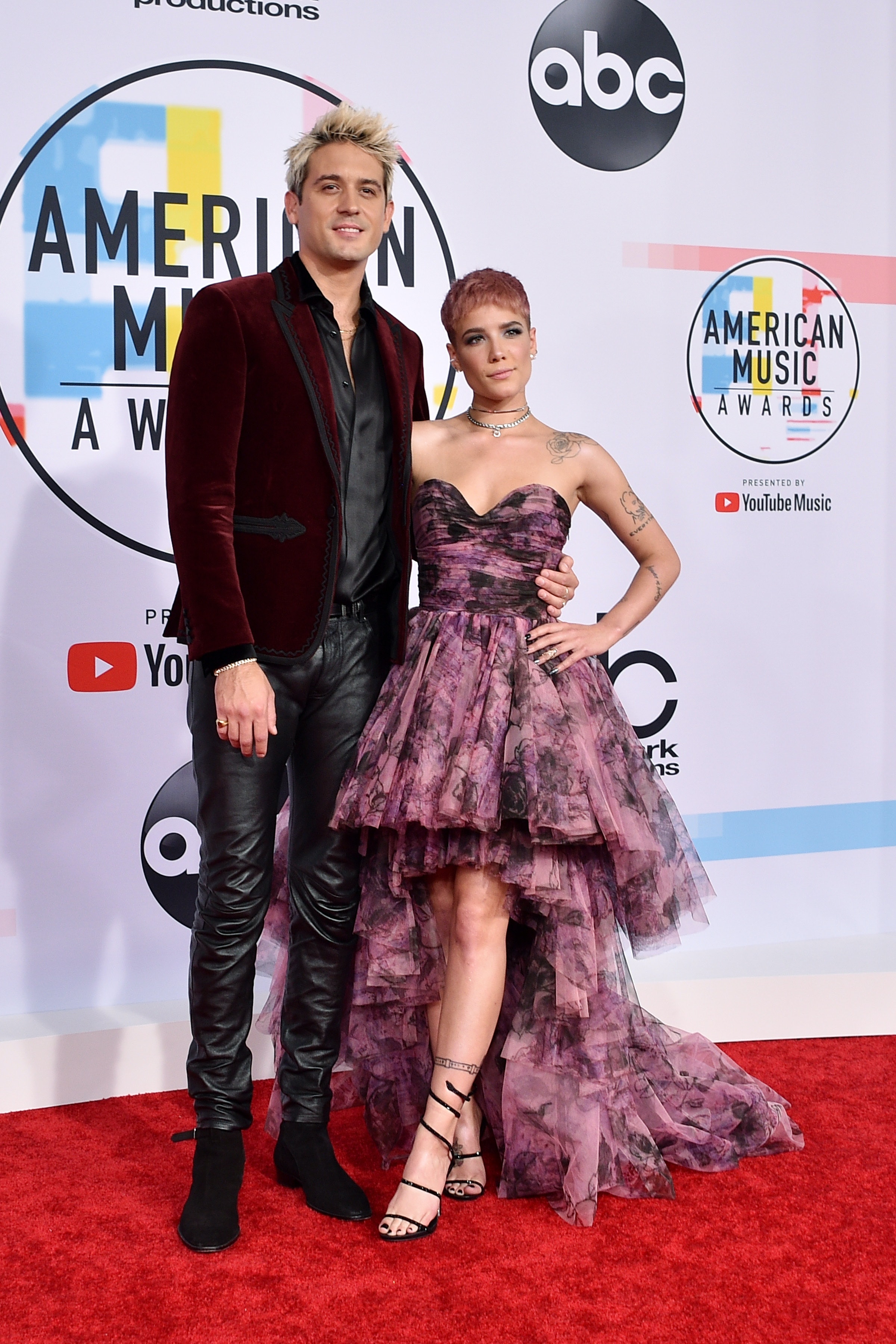 Halsey famously had an on again/off again relationship with rapper G-Eazy from 2017 to 2018. Following their breakup, Halsey called out Instagram followers who were spamming her feed with her ex’s name by informing them of what was really happening behind closed doors.

"I see y’all in the comments," she wrote. "And I know you think you’re funny. Cause you’re at home on your iPhone and I’m not a real human being to you. I hope to God you never have to experience an abusive relationship. And if you do, I hope the world is kinder to you than you are to me,"

Her song "Without Me" is also rumored to have been about Eazy, meaning this stage backdrop she had for her Saturday Night Live performance of the ballad might have been hinting that Eazy was unfaithful to her multiple times: 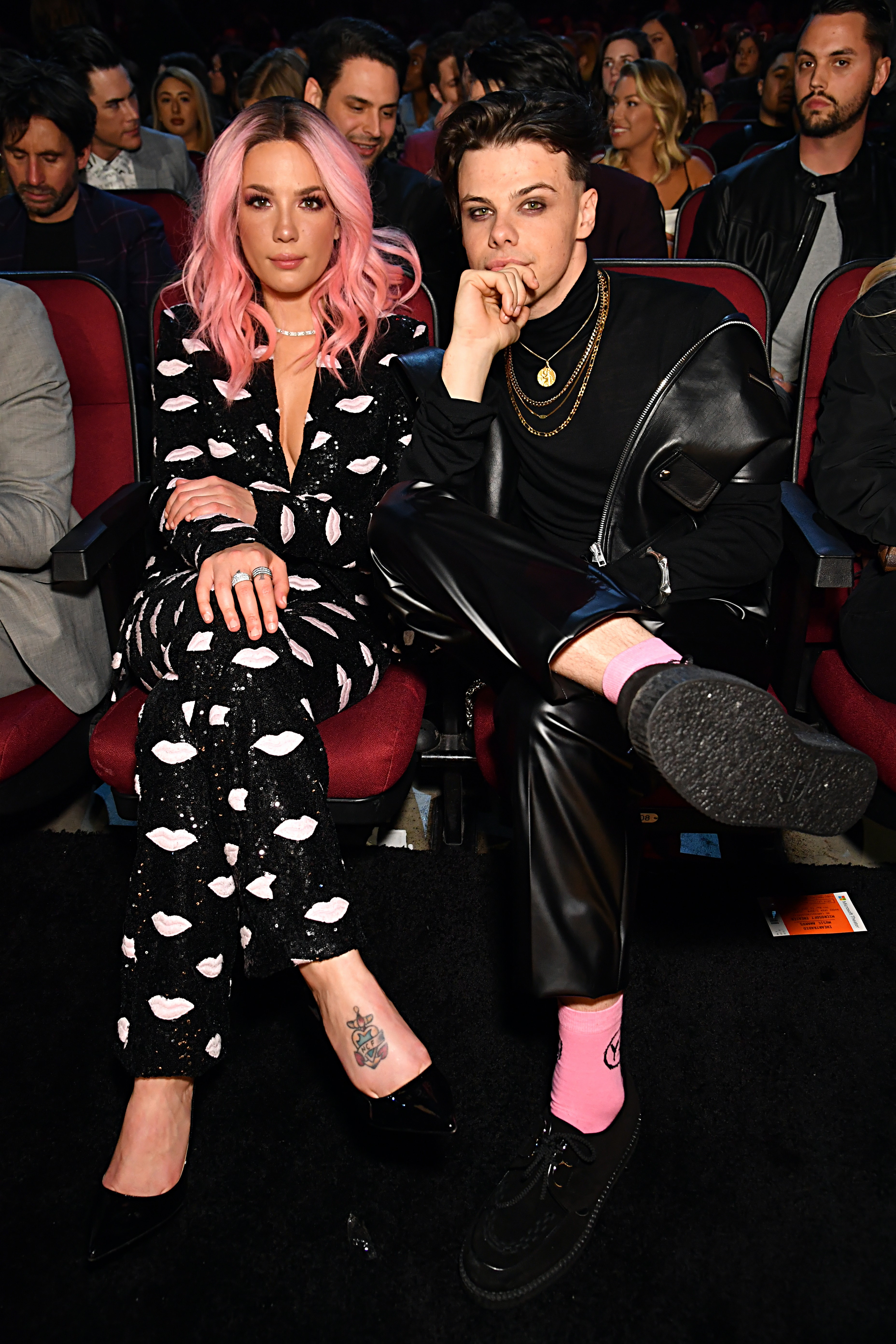 Halsey went Instagram official with British rapper Yungblud in January of 2019. She announced their split in October that same year in a since deleted tweet. “Sometimes. People just break up,” she wrote, per People. “It doesn’t mean someone cheated or something bad happened or someone f*cked up. Sometimes. It just happens. Because life is constantly changing. And adults stay friends and move on.” 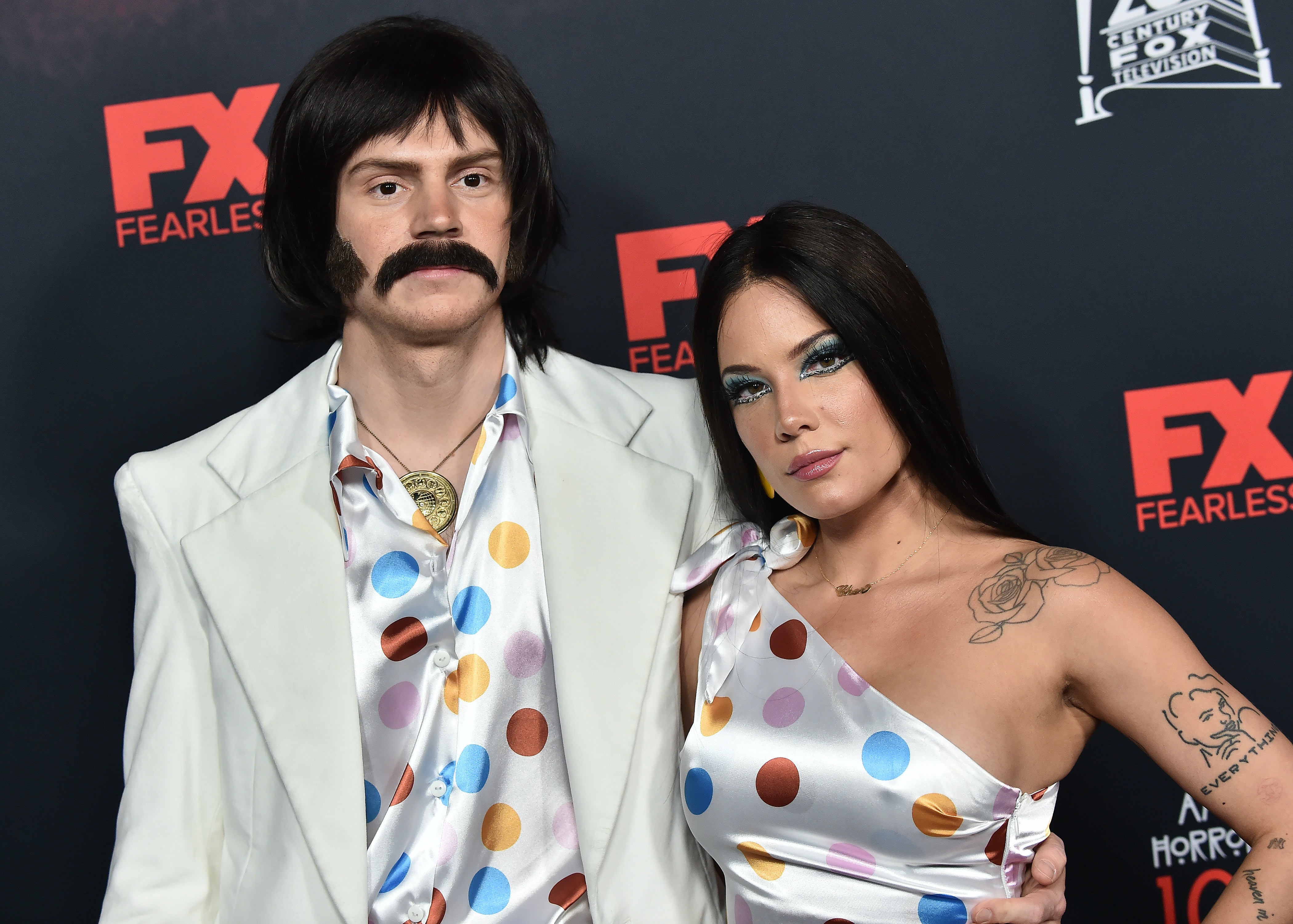 Halsey and Evan first sparked romance rumors in September of 2019 when photos surfaced of them hanging at Six Flags in Los Angeles.

In a January 2020 interview with The Sun, Halsey opened up about her decision to keep her relationship with Evan relatively quiet. "A friend of mine – another female artist who has been criticised for dating a lot of people – said, ‘Ashley, you need to live your fucking life and ignore what people say about you.’ And so now I keep everything to myself in terms of my romantic relationships," she explained.

That said, she did add that it was nice dating someone who was not a fellow musician like every other guy who came earlier on this list. "I will say that it’s good to not date another musician as then your work follows you everywhere," she shared. "Now it’s my personal life so I get to go home to somebody that I love and spend time with them, and it not be about work."

By May of 2020, fans started suspecting the two were broken up as the pair deleted all photos of each other from their respective Instagram pages.

There’s not a ton out there about Halsey’s rumored relationship with Alev other than, ya know, the whole pregnancy announcement thing.

Buuuuut, in June of 2020, the two did get matching tattoos on their feet that say "Seeds" in each other’s hand writing. Tattoo artist Amanda Owley posted pictures of them and their tattoos to her feed on June 22 alongside the caption:

I may be reading into it too much, but maybe "seeds" was alluding to the baby?? Like planting their seed????