Zendaya Opens Up About Prioritizing Mental Health and Going To Therapy

Zendaya is opening up about therapy, happiness and her life in front of the camera. The actress recently sat down for an interview with British Vogue, and reflected on how she’s managed to make her mental health a priority as she’s lived life in the spotlight.

“Of course I go to therapy,” the Dune star shared in her candid sit-down with the U.K. publication. “I mean, if anybody is able to possess the financial means to go to therapy, I would recommend they do that. I think it’s a beautiful thing.”

“There’s nothing wrong with working on yourself and dealing with those things with someone who can help you, someone who can talk to you, who’s not your mom or whatever,” the 25-year-old actress added. “Who has no bias.”

Zendaya reflected how, it wasn’t really until the coronavirus pandemic and the long, emotionally draining lockdowns that she first experienced a kind of persistent existential sadness that so many have faced in recent months.

“[It was the] first kind of taste of sadness where you wake up and you just feel bad all day, like what the f**k is going on?” she said. “What is this dark cloud that’s hovering over me and I don’t know how to get rid of it, you know?”

One thing the young actress seems to feel the greatest amount of stress over is the balancing act between spending the money she’s earned over her decade-long career that began as a teen and saving every penny in case of misfortune.

“My mother’s a saver, and so I try to keep that in mind. Then my dad’s like, ‘You know, you can’t spend it when you’re dead,’ kind of thing,” said Zendaya. “I’m somewhere in-between.”

“The hope is to have a career where you can be in a position, financially, to just do things you want to do because you enjoy the work and not have to worry about the other things,” she reflected. “But I’m always like, ‘I will always need to work.’ Because if I don’t work then everything can be gone tomorrow.”

Zendaya admitted that this particular issue is one thing she discusses with her therapist in sessions.

The actress said she’s been able to channel some of her stress and her moments of sadness in her bleak role on HBO’s Euphoria, in which she stars as a drug-addicted high school student named Rue.

However, she added that she’s “the most sober person you could ask to play this part. [So] I can only understand it to an extent.”

Having spent her life in front of a camera, Zendaya has grown up in the public eye. The actress explained that this unique dynamic has actually informed some of her choices as an actress on set.

Zendaya shares that, while on the Disney channel show Shake It Up at a teen, she refused to do a kissing scene as she’d not actually had her first real kiss.

“I remember being on Shake It Up and being like, ‘I’m not gonna do this. I’m going to kiss him on the cheek because I haven’t been kissed yet so I don’t want the kiss to be on camera,'” she shared.

She then headed over to France for the Paris premiere of the sci-fi epic. On Monday, the star stunned while attending a photo-call for Dune at Le Grand Rex in Paris, rocking a aubergine ensemble from the Alaïa Winter/Spring 22 Collection, featuring a mermaid perforated knitted skirt and crop top. 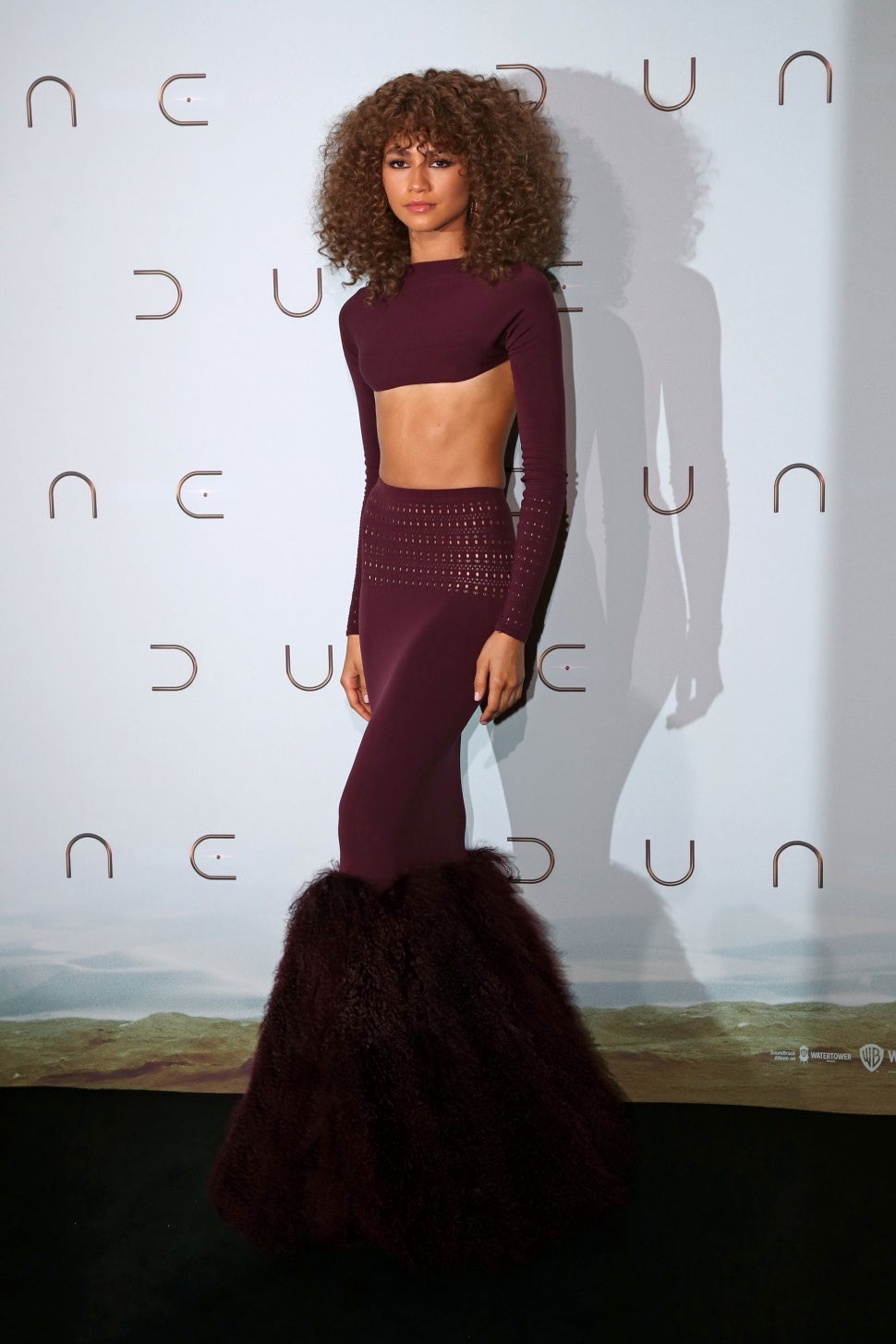 Zendaya will soon be seen in Dune, which is set to hit theaters on Oct. 22, and then Spider-Man: No Way Home, due out Dec. 17.

The October 2021 issue of British Vogue hits newsstands on Friday.