Our critics and writers have selected noteworthy cultural events to experience virtually.

A Peek Behind ‘Broken Theater’ 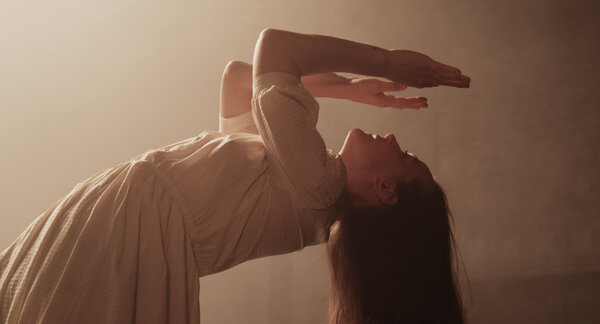 In May 2019, the dancer and choreographer Bobbi Jene Smith took over the Ellen Stewart Theater at La MaMa, in the East Village, with “Lost Mountain,” a vivid, tempestuous work of dance theater for 10 dancers and musicians. Throughout the coronavirus pandemic, Smith, who is currently La MaMa’s resident artist, has continued working with members of that cast on a sequel of sorts, “Broken Theater,” further excavating the tense, almost familial relationships of the earlier project. “We’ve been really digging into themes of power, love and chaos, which I feel are all around us these days,” Smith said by phone.

On Friday and Saturday at 7 p.m. and Sunday at noon, La MaMa will stream “In Process With Bobbi Jene Smith,” a recorded program featuring an excerpt from “Broken Theater” and conversations with some of the artists. Tickets to each broadcast are pay-what-you-can, from $5 to $25, and available at lamama.org/in-process-with-bobbi-jene-smith.
SIOBHAN BURKE

If you swiped through TikTok at any point in the fall of 2019, you likely heard the glue trap of a hook from Ashnikko’s song “STUPID.” At the height of its popularity, “STUPID” appeared in videos by some three million of the app’s users. That early hit previews much of what animates its creator’s new mixtape, “Demidevil”: lewd antics, bravado, misandry and zippy one-liners engineered for social media (e.g., “I put that teddy bear you gave me in a blender” — imagine that viral challenge).

The release of “Demidevil” — effectively Ashnikko’s debut album — is set for Friday. Often billed as a rapper, Ashnikko does utilize trap production but leans in to singing on this tape, her yelpy style borrowing heavily from pop-punk from the 2000s. She bears this influence with particular pride on “L8r Boi,” a spin on Avril Lavigne’s 2002 smash “Sk8r Boi.” Ashnikko’s R-rated remake both indulges in Y2K nostalgia and attempts to update the original with a more feminist bent.
OLIVIA HORN

Exploring a Wilderness of Emotion

Trying to teach coping skills and yoga moves to preschoolers through a livestreamed Zoom musical may sound like a recipe for chaos. But thanks to judicious use of the mute function (and the help of attending parents), New York City Children’s Theater has made this premise work.

The result is “Forest of Feelings,” created and performed by Rachel Costello and Dan Costello, the married founders of Yo Re Mi, a musical yoga program for children. During an interactive adventure to help a lost laugh return to the woods of the title, little ones submit ideas, practice basic yoga poses and master simple calming techniques, like deep breathing.

Playing twice on Sundays (except on Jan. 24) through Feb. 7, this half-hour show unfolds against Preston Spurlock’s colorful animations. Families registering on the theater’s website receive related video activities and a Zoom link for $20. For two weeks after the production closes, the forest will still welcome children in an on-demand recorded performance, available for $15.
LAUREL GRAEBER

Strangers on the Phone

Getting on the telephone to talk with an anonymous stranger — not an actor playing a role, just a member of the public like you — might not sound like theater. Yet “A Thousand Ways (Part One): A Phone Call,” a gentle-hearted participatory piece from the experimental duo 600 Highwaymen, is an affecting exercise in socially distanced connection. With an automated voice posing scripted questions (“Are you good in an emergency?”), the two people on either end of the private, hourlong encounter are each other’s only audience.

The start of a planned triptych whose other parts will take place in person, “A Thousand Ways (Part One): A Phone Call” is a calming counterpoint to this anxious, atomized moment. Presented through Sunday as part of the Under the Radar Festival (tickets are free but sold out at publictheater.org), it’s available concurrently through Stanford Live, where $75 tickets at live.stanford.edu include admission to Parts 2 and 3, coming later this year to one of the performance spaces on Stanford University’s campus in California.
LAURA COLLINS-HUGHES

Inside a Mystic’s Mind

Audiences who enjoyed the Metropolitan Opera’s 2016 production of Kaija Saariaho’s “L’Amour de Loin” have a reason to celebrate this weekend. Starting on Saturday, the Operavision platform will be streaming a concert performance of another dramatic work by the Finnish composer: the oratorio “La Passion de Simone,” inspired by the life and writing of Simone Weil. (The stream will be available free and on demand for six months.)

Despite the Passion framing, the piece is not an unalloyed celebration of Weil, a mystic and philosopher. Saariaho’s music, along with the writing of her regular librettist, Amin Maalouf, moves between being swept up with Weil’s thinking and commenting on it. The oratorio’s narrator — usually a soprano role — is sung from the perspective of an unnamed, fictional sister of Weil’s. (Weil’s own writing is piped into the mix, too, via electronics.) In this Operavision performance, taped late last year, the part was sung by the veteran mezzo-soprano Anne Sofie von Otter, which makes for another compelling reason to tune in.
SETH COLTER WALLS