Our critics and writers have selected noteworthy cultural events to experience virtually.

Black History, Set to a Beat 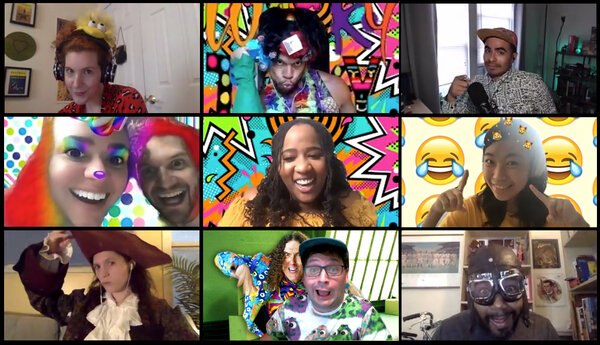 The genius of Lin-Manuel Miranda and his creative cronies has been absent from Broadway since the lockdown in March. That doesn’t mean, however, that if you’re a young fan of “Hamilton” or “Freestyle Love Supreme,” you can’t partake of those shows’ signature wit. Freestyle Love Supreme Academy, the improv troupe Miranda helped found, is presenting virtual programs, so don’t throw away your shot.

The two-part Hip Hop Homeroom: History Rhymes & So Do Dreams, for ages 7 to 17, will take place Saturday and Sunday from 4 to 6:30 p.m. Eastern time. Tarik Davis and Adrian Sexton, with the facilitators Andrew Bancroft and Aneesa Folds, will explore Black history, civil rights and voting. They will deliver their lessons to a beat, and students, divided into groups by age, will develop their own skills.

This Zoom workshop, which costs $100 per family, will end daily with a cypher, or group rap. On Saturday, each participant will choose a heroic Black figure as the subject of a personal rap to perform on Sunday.

Going Back in Time

Last year, the Grammy-winning vocalist Kurt Elling unveiled a stage production called “The Big Blind,” modeled after the noir radio dramas that, like jazz, held the nation’s attention in an era just before television.

Written with Phil Galdston and inspired by the 1957 Frank Sinatra film “The Joker Is Wild,” Elling’s sound play tells the true story of Joe E. Lewis, a vocalist robbed of his singing ability by an Al Capone lieutenant, who cut his throat for refusing to play an exclusive engagement at Capone’s Green Mill Cocktail Lounge in Chicago.

Featuring original compositions and standards, “The Big Blind” turns on the question of what happens to an artist’s creativity when his primary channel of expression is stolen. And if that doesn’t feel relevant enough to today, given all that the coronavirus pandemic has taken from jazz musicians, here’s another special resonance: Elling will perform “The Big Blind” on Saturday at the Green Mill, which has changed hands a number of times but stayed in continuous operation since the Capone years. Unlike past presentations, when Elling has been joined by actors and a big band, he will perform it with just a sextet, streaming live at greenmilljazz.com, at 4 and 9 p.m. Eastern time. (Passes are $15 for each show.)
GIOVANNI RUSSONELLO

In the late 1950s, the composer John Cage wrote and recorded a series of stories titled “Indeterminacy.” Each story, no matter its length on the page, lasted exactly one minute when spoken aloud. In his 2017 solo “Cage Shuffle,” the actor and writer Paul Lazar recites some of those stories, selected at random, while performing a fixed piece of choreography. With each performance, the words change, while the movement stays the same.

For our new era of virtual performance, Lazar has teamed up with the venerable dance artist Bebe Miller to reimagine the solo as “Cage Shuffle: A Digital Duet.” With the camera’s help, the collaborators allow language and movement to volley between them, nimbly navigating the tension between order and chance. A production of Big Dance Theater, the company Lazar co-founded with Annie-B Parson (who contributed choreography), the duet was streamed live from the Wexner Center in Columbus, Ohio, earlier this month. The recorded performances are available at wexarts.org through Nov. 22.
SIOBHAN BURKE

Dr. Katz Is In

No matter who you voted for, you’re likely experiencing a lot of emotions right now. Perhaps sitting in on a new session of “Dr. Katz, Professional Therapist” might calm your nerves, provoke some hearty laughter or at least grant you a respite from everything that’s going on.

That’s Katz as in Jonathan Katz, the comedian who won an Emmy Award and a Peabody Award for his animated series. The show, which ran from 1995 to 2002 on Comedy Central, allowed Katz to psychoanalyze his funny friends and celebrity guests through a combination of repurposed stand-up bits and improvised dialogue. Since “Dr. Katz” went off the air, he has indulged audiences at comedy festivals over the years with live editions.

On Sunday, Katz will livestream an episode of sessions from Los Angeles with patients that include the actors Jon Hamm and Oscar Nunez, as well as the comedians Bob Saget, Susie Essman, Andy Kindler and Paul F. Tompkins. Laura Silverman will reprise her role from the TV series as the receptionist. “Dr. Katz Live” starts at 8 p.m. Eastern time on RushTix.com. Tickets are $20.
SEAN L. McCARTHY

Analysis of a Fraught Relationship

For decades, rappers have offered vital and enduring documentation of the criminal justice system’s fraught relationship with Black Americans. In “Louder Than a Riot,” a new podcast from NPR, the writers Rodney Carmichael and Sidney Madden delve into that relationship — going beyond protest songs and “conscious” rap to unpack the rise of gangster rap, the record labels that have cashed in on street cred and stereotypes, and the ways that law enforcement has targeted hip-hop stars.

New episodes are released on Thursdays. Last week’s was the first installment in a three-part account about Bobby Shmurda, an upstart from Brooklyn who pleaded guilty to weapons and gang conspiracy charges in 2016. In a new interview — one of just a few he has given since being incarcerated — Shmurda paints a picture of his East Flatbush upbringing. This week, his story is complicated by a closer look at the neighborhood’s endemic violence, and his crew’s hand in perpetuating it.

Previous episodes cover the crackdown on hip-hop mixtapes in the mid-2000s and the murder trial of the New Orleans-based rapper Mac Phipps. With its share of courtroom drama, music industry shoptalk and thoughtful analysis, the series is finely calibrated to appeal to true-crime junkies, hip-hop fans and champions of social justice alike.
OLIVIA HORN

In honor of Friday the 13th, how about a little “Macbeth”? Not the play proper, mind you. Shakespeare’s superstition-laden tragedy, whose title alone is thought to bring bad luck if uttered in a theater, is a bit heavy and blood soaked to offer any respite from the ongoing tumult out there. A quick comic riff on the Scottish Play is a better fit.

Tammy Riley-Smith’s 12-minute film “Lady M” (on Amazon Prime Video) stars a wonderful Samantha Bond (“Downton Abbey”) as Margot, a British actress who has played the ambitious Lady Macbeth to some acclaim. Auditioning for a new production, she expects to be considered for that role. So she is horror-struck when the male director tells her that, as a woman in her 50s, she has a single take-it-or-leave-it option: playing a witch.

Written by Melissa Knatchbull, “Lady M” (2017) is a delectably satisfying feminist revenge fantasy, in which sidelined older actresses constitute a righteous sisterhood. For those who miss live theater, an additional frisson of pleasure comes from visiting that milieu again, even briefly.

On the opening night of the “Macbeth” that insulted her, Margot settles into the audience and summons her dark powers. Magic ensues.
LAURA COLLINS-HUGHES

The Czech composer Jaromir Weinberger has been enjoying an unexpected boomlet of attention of late. His playful 1922 “City Shimmy” had its world premiere recording on a CD by the pianist Gottlieb Wallisch earlier this year. And now the Naxos label has released a recent reconstruction of Weinberger’s 1933 operetta, “Frühlingsstürme” (“Spring Storms”), on home video formats.

Until this new Komische Oper Berlin staging, Weinberger’s piece had barely enjoyed a hearing since being banned by the Nazis. As my colleague Joshua Barone wrote, while attending rehearsals, Germany’s late-Weimar “turmoil was not lost on the show’s predominantly Jewish creators.” (Weinberger himself would later resettle in the United States.)

The high-spirited opus avails itself of some typical operetta devices, including buffoonish generals (as well as spies and journalists in disguise). Today, their net effect on a viewer can swing wildly — seeming comic or poignant in one passage and then unnerving in the next (whenever some augur of fast-approaching dangers appears, only to be underestimated).

Still, even through the layers of our contemporary hindsight, the slyest moments of Weinberger’s score make a convincing argument for the piece. And it’s far preferable to have it available, rather than suppressed — particularly with interpreters like the soprano Vera-Lotte Boecker and the tenor Tansel Akzeybek inhabiting key roles with such style.
SETH COLTER WALLS