FLORENCE, Italy — Compared to showier works in Florence’s Pitti Palace — paintings by Caravaggio, Raphael, and Titian — the small “Vase of Flowers” by Jan van Huysum might barely earn a second glance, even if the artist was among the most popular still-life artists working in the Netherlands in the 18th century.

But its return to the Pitti on Friday, 75 years after a German soldier made off with the artwork, was a ticker-tape event attended by a flotilla of dignitaries including three ministers, one cardinal, Florence’s mayor and various diplomats and high-ranking military police generals.

“Today we render justice to history,” said Eike Schmidt, the director of the Uffizi Galleries and who is also responsible for the Pitti Palace. The return of the painting was “a very important recovery,” he said, adding that he hoped it would lead to the restitution of other works of looted art that were still missing from museum collections.

Enzo Moavero Milanesi, Italy’s foreign minister, spoke during the ceremony of the “team effort” that had led to its return, involving German and Italian diplomats, justice and culture ministry officials and military officers assigned to Italy’s art crimes squad.

A special shout out was given to Heiko Maas, Germany’s foreign minister, who backed Italy’s efforts to retrieve the painting from the heirs of the soldier who took it.

The soldier may not even have known of the painting’s true value. Mr. Moavero cited a July 1944 letter that the soldier had written to his wife in they city of Halle, later part of East Germany, to say that he was sending her a package with a “pretty painting” that would look good in a gold frame. 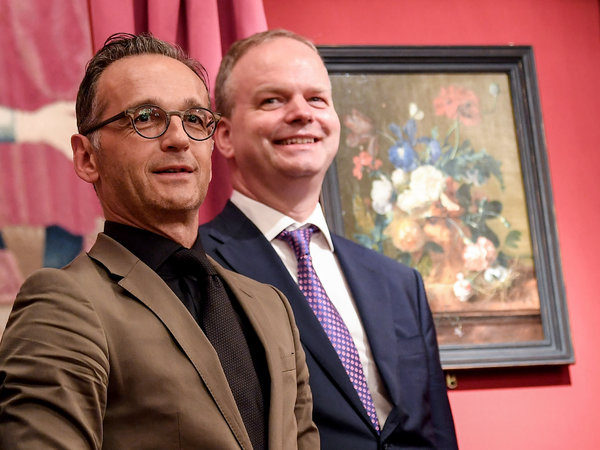 Efforts to find the work after the war had ground to a halt, until the Berlin Wall fell in 1989 and the soldier’s heirs made the first of several overtures to Italian officials, as well as a London auction house, to sell the painting back. When a lawyer for the family tried to negotiate a sale to the Uffizi last year, prosecutors in Florence initiated an investigation to determine whether the request could be construed as extortion.

Pressure on the family was ratcheted up considerably in January, when Mr. Schmidt began an attention-grabbing media and online campaign demanding the painting’s return. He hung a black and white photo of the painting in its original spot, with the word “stolen” in various languages blazoned around the frame. “Eike ignited the final acceleration,” Mr. Moavero said.

The painting was exhibited for the first time in Florence in 1824, when the Grand Duke Leopold II of Hapsburg-Lorraine bought it to hang alongside other still lifes for a newly created gallery in the Pitti Palace.

It hung for over a century in the so-called Room of the Putti, and was moved when the palace was evacuated during World War II and its artworks were transferred for safekeeping to various villas near the city. “Vase of Flowers” disappeared from public records in 1944 when German soldiers shipped artwork northward, as the Allies advanced.

Culture Minister Alberto Bonisoli said Friday that Italy was involved in other negotiations to retrieve artifacts it claims were stolen, including a bronze statue that is a centerpiece of the Getty Villa in Los Angeles. But in the case of “Vase of Flowers,” the negotiations had been particularly tricky, because the work had been in private hands, and Italy’s legal claims were inadmissible under German law. “It wasn’t so simple to get it back,” he said.

After traveling from Germany with Mr. Maas and his entourage on Friday, the painting was solemnly unveiled at the ceremony in the grandiose Stucco Hall of the Pitti Palace.

To celebrate its return, the painting has been hung in the so-called Music Room, and will later be returned to its original spot in the Room of the Putti.

“A museum without its works of art is like a vase without flowers,” Mr. Maas said Friday. “We can’t say that the Uffizi was empty, but there was something missing, a void. Today we are here to fill that void.”