Amy Chaplin, best known for her plant-based cookbooks, shares a recipe for onigiri, something she often makes for herself. 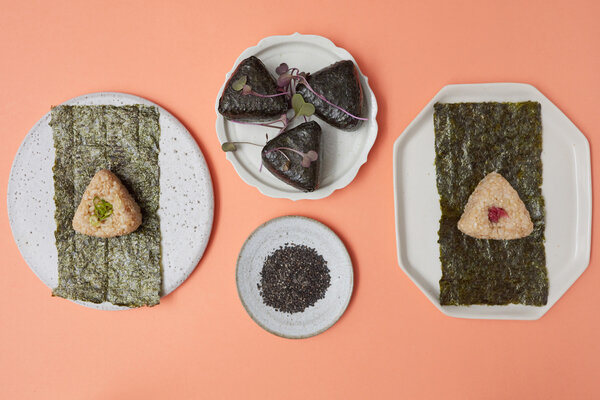 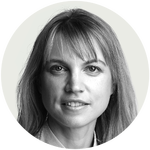 At her home in New York’s Hudson Valley, chef Amy Chaplin keeps replanting her rainbow carrots. It’s not the rabbits and deer that get into her crop, though — it’s her 1 1/2-year-old son, Ezra, who’s in the “very active” phase familiar to so many parents of toddlers. “He’s totally into everything in the garden, ripping up the plants,” she says. Fortunately, there’s plenty for him to explore. Since late March, the family has been living in Chatham, in a renovated 18th-century Colonial house that once served as a general store, and that provides easy access to the sort of fresh, wholesome foods (grains, beans, nuts and seeds) and seasonal produce Chaplin is known to favor. This is what many people eat or aspire to eat today, but Chaplin, who grew up on a farm in New South Wales, Australia, and honed her skills as a private chef and at restaurants including the now-closed Angelica Kitchen in Manhattan, is able to transform her healthful ingredients — often with the help of fermented garnishes — into complex, craveable dishes, examples of which fill her two award-winning cookbooks, “At Home in the Whole Food Kitchen” (2014) and “Whole Food Cooking Every Day” (2019).

Of course, the pandemic has changed the meaning of “every day,” and Chaplin has in turn noticed a shift in her cooking. “In the beginning, I was determined to test recipes and make gluten-free sourdough,” she says. “My mind-set was very much ‘use this time!’” As weeks turned into months, she adopted a less structured approach, partly because she’s been caring for Ezra full time and has less energy to prep. “Some days I’m so tired I don’t want to soak my rice, but I do,” she says. Fiber-rich brown rice, that is. This is an essential for Chaplin, who uses it for various comfort foods, among them onigiri, or rice balls, though they’re often more triangular in shape. A common snack in Japan, they usually feature pickled or fermented fillings. Chaplin would eat them as a teenager in Sydney in the early ’90s, when she first became interested in healthy, holistic cuisine, and soon after trained at a Dutch-Japanese restaurant specializing in macrobiotic cooking, the aim of which is to balance the acidic with the alkaline. Her current go-to recipe for onigiri isn’t strictly macrobiotic, but it does pay tribute to the ideas of symmetry — with the plum offsetting the rice and vinegars — and simplicity. “When you focus on good ingredients prepared carefully, you feel calm, satisfied and grounded,” she says, summing up the philosophy that’s shaped her entire career.

She was set to open her own restaurant, Bramble, in Tribeca, last spring, but those plans, like so many others, are now on hold. “We just don’t know if it’s going to happen,” says Chaplin. “Restaurants are really affected. I have a lot of friends who have pivoted or closed their businesses, and I’m really concerned.” For now, she’s taking things as they come and trying to find the positive in having adopted a slower pace of life. “I think people have a renewed appreciation for local food, growing their own produce and pantry cooking — experimenting with what they have,” she says. For Chaplin, that might mean roasting squash with the garlic, shallots, broccoli rabe and collard greens from her most recent C.S.A. delivery, tossing brown rice pasta with savory crushed pine nuts or puréeing foraged ramps and whatever greens survive Ezra’s garden romps for an easy soup. Or she might opt for her beloved onigiri, which is well-suited to Chaplin’s newly spontaneous style: It can be served as a snack or, perhaps alongside a simple green salad, as a meal. 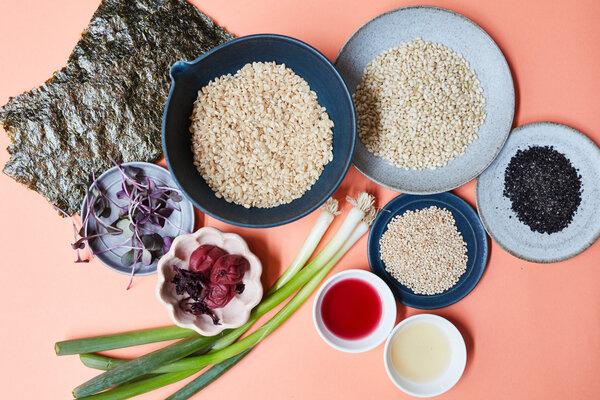 2 umeboshi plums, pitted and quartered (larger ones cut into sixths)

2. Fold each nori sheet in half and press along the fold to break.

3. With clean, damp hands take about ½ cup of the rice mixture and press into a ball between your palms. Mold rice into a triangle shape by squeezing with your fingers. Flatten as needed with your palms to get a neat 2 ½- to 3-inch-tall triangle. Place on a clean cutting board. Use your thumb to make an indent in the center of the rice; fill with a piece of umeboshi plum and a pinch of scallions.

4. Place molded rice upright in the center of nori sheet. Dampen each end of the nori sheet and fold up and over sides of rice, completely covering the rice with the nori. Dampen your fingers to seal well. Set aside and repeat with remaining rice.

5. Garnish with radish micro greens and serve with black sesame gomashio (“which you can dip the onigiri in, as you’re eating, to add a toasted, salty flavor,” says Chaplin) on the side.

1. Combine rice and sweet rice in a 2-quart pot, wash and drain and cover with about an inch of filtered water.

3. Return rice to pot and add 2 ¼ cups water and salt and bring to a boil over high heat.

4. Cover pot, reduce heat to low and simmer for 50 minutes or until all the liquid has absorbed.

5. Remove from heat and set aside, covered for 10 to 15 minutes, then remove lid to cool completely.

“This Japanese sesame condiment adds nutty complexity to simple foods,” says Chaplin, “and is a source of fiber, iron and magnesium.”

1. Put sesame seeds in a skillet over low to medium heat and stir frequently for about eight to 10 minutes or until fragrant. Let cool.

3. Place in a sealed glass jar and store in the fridge, where it will keep for a month.