Ofcom has received more than 1,900 complaints over an episode of Britain’s Got Talent in which Alesha Dixon wore a Black Lives Matter necklace.

Saturday’s episode saw Dixon, who is a judge on the show, wear a necklace which featured the letters BLM in gold.

The broadcasting regulator said the vast majority of the complaints it had received about the episode related to her choice of jewellery.

An Ofcom spokesman said: “We are assessing these complaints against our broadcasting rules, but are yet to decide whether or not to investigate.”

Dixon wore the necklace after a performance by dance group Diversity earlier in the series, which sparked more than 24,500 complaints to Ofcom.

Their performance, which was inspired by the Black Lives Matter movement, included a section where a white police officer (played by a dancer) stepped on Ashley Banjo’s neck.

It was a reference to the death of George Floyd in police custody in Minneapolis, Minnesota earlier this year. 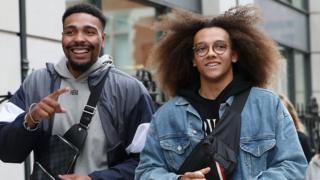 Other dancers crowded around Banjo with smartphones pretending to capture the incident on camera, while others performed with police riot shields.

ITV defended the performance, adding that it was “authentic” and “heartfelt”.

But Ofcom highlighted the importance of freedom of expression in artistic routines, adding that it would not investigate the complaints as it did not consider the performance to be racist.

Dixon’s choice of jewellery on Saturday’s episode was widely seen as an act of solidarity with the dance group following the controversy.