In Riverside Park, behind the locked bars of an Amtrak maintenance entrance near 108th Street, a large still-life painting of flowers leans against a wall. The canvas appears to be rotting and fraying into a tangle of dead roots and leaves, with new blossoms erupting three-dimensionally from the surface. The artist Valerie Hegarty wanted to blend fiction with fact: She imagined a Dutch Vanitas painting — a reminder of mortality — had been stolen from the Metropolitan Museum of Art and hidden here, only to be abandoned when the pandemic struck.

“It’s been decaying, but now that spring has hit the city, things are growing back out of the destruction,” said Hegarty, who placed on a nearby ledge a painted papier-mâché sculpture of an albino pigeon holding a bright flower in its beak as a sign of hope. “Vanitas painting is about impermanence, which is something we’ve all been feeling pretty hard this past year.”

Hegarty is one of 24 artists contributing site-specific projects responsive to this moment of loss and renewal in the exhibition “Re:Growth, a Celebration of Art, Riverside Park and the New York Spirit.” The exhibition, which was organized by the curator Karin Bravin, populates the landscape from 64th to 151st Streets and runs through Sept. 13. It’s the largest art show in the park’s history, according to the Riverside Park Conservancy, which produced it. 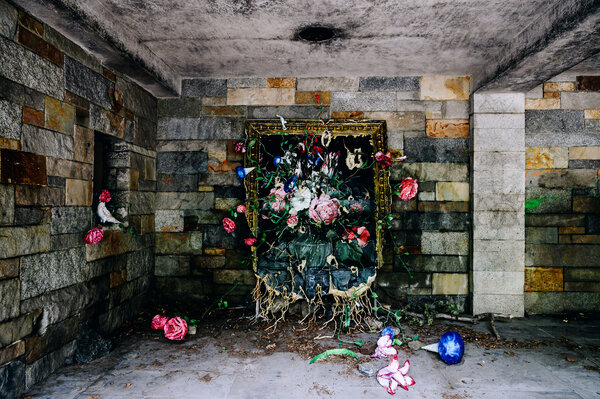 “I spent so much of the pandemic walking through the park and thought this would be the perfect time to see public art,” said Bravin, who proposed the idea to Daniel Garodnick, president and chief executive of the conservancy, in the bleak days of November.

“I thought ‘regrowth’ as a theme would be incredibly uplifting as we emerge from this tragic year and restart our lives,” Garodnick said. The show is being sponsored by 32 individuals and corporations. In 2020, the conservancy experienced a 62 percent increase in its small-donors category, yielding just over $600,000. (Other parks experienced similar pandemic surges in donations as well as usage. Prospect Park, in Brooklyn, for instance, has seen a 100 percent increase in the dollar value of contributions from individual donors over the last 15 months, according to Sue Donoghue, president of the Prospect Park Alliance.)

As spring barrels toward full-on summer, and as New Yorkers start to feel more comfortable shedding masks as requirements lift for those who are vaccinated, the show may encourage long walks and lead visitors to explore new parts of the park. “It’s about the discovery, the journey, the looking for the work,” Bravin said. Signage at park entrances and at each installation includes a QR code that leads to a map and information about the exhibition as well as every work and artist.

Some installations in the middle of grassy areas along the waterfront announce themselves from a distance. Near 82nd Street is a 15-foot-high curving sculpture of stacked Corten steel cylinders created by DeWitt Godfrey; it evokes the natural geometry of honeycomb or plant-spore patterns. At 91st Street, people can enter “Riverside Reading Room,” a small open house erected by Mary Mattingly and lined with shelves of fossil, rock, earth and plants such as aloe, dracaena and ponytail palm as a meditation on cycles of growth and climate change.

Other installations may sneak up as you walk by. A garden of some 30 biomorphic shapes — crafted by Sui Park from hand-dyed zip ties in a vibrant palette including green, orange, yellow and pink — seems to sprout from the ground in a lush enclave just below 79th Street. On an outcropping of boulders near 75th Street, a blanket of green molded forms creeps over the expanse like ivy or moss. Each unit is the bottom end of a plastic Mountain Dew bottle, riveted together by Jean Shin. The installation takes on a dazzling florescent glow when hit by the sun.

“Most single-use plastic is not recycled, and our consumer waste is invading the world,” said Shin, who wants to create an encounter that makes us question these everyday objects and our relationship to nature. “What’s the true cost of this convenience to our landscape and our bodies?”

On the pier jutting out at 70th Street over the Hudson River, Dahlia Elsayed has affixed 16 brightly patterned banners in couplets along a row of lampposts. Referencing design elements of traditional North African and Asian rugs, each pair also includes phrases lifted from the terminology used by pilots — such as “Picking up signals/with minimal resistance” and “Chart towards/the charms” — that can be read as a poem as you’re walking out on this runway.

“I had been thinking about flying carpets and being able to leave in this magical way as I was holed up and staring at four walls, like everyone else,” Elsayed said. “These flags are inviting you on a journey out.”

The privately funded conservancy, celebrating its 35th anniversary of restoring and improving the park, spent much of last year focusing its efforts above 125th Street, adjacent to Harlem. “Our north-park initiative is bringing more resources to the areas of the park that traditionally had seen less investment from the city,” said Garodnick, noting a $2.3 million allocation from the city last year for north-park infrastructure upgrades. He hopes the exhibition will draw people uptown.

Along the river at 125th and 149th Streets, as well as at 64th and 79th Streets, signage guides visitors to a free augmented-reality app, which enables them to experience, through their iPhones, Shuli Sadé’s wild organic orbs that appear to float over the water and landscape. Near 148th Street by the river, two concrete figures by Joshua Goode are suggestive of neolithic votive statues, except their heads have the distinctive cartoon silhouettes of Bart and Lisa Simpson.

At the corner of a fence enclosing a ball field at 145th Street, Glen Wilson has mounted two 8-by-10-foot photographs of young Black female mail carriers, one taken in his neighborhood in Venice Beach, Calif., and the other in Harlem. After printing the images on industrial flexible plastic and cutting them into strips, Wilson wove the monumental photographs into the fabric of the chain-link so it appears the women are looking toward each other at an intersection of the fence.

“It’s this bicoastal, cross-country glance back at one another and the celebration of labor and the folks who essentially carry the weight and trust of the neighborhood,” said Wilson, who is interested in Riverside Park as a democratized space. “The park represents the best of civic pride. We all know we have a piece of it, and we all know we belong there.”