A new recording of “Anyone Can Whistle,” the 1964 musical by Stephen Sondheim and Arthur Laurents, has for decades been on the wish lists of Broadway cultists and completists. Now that their wish has been granted — a complete studio version from the English label Jay Records was released in December — I think they’ll find that new isn’t always enough.

Which is not to say it isn’t vastly welcome. The original cast album from Columbia Records, though better than you might expect from a one-week flop, is less than ideal. Sondheim’s endlessly inventive score was heavily truncated, and the singers, who recorded it on the Sunday morning after the closing on a Saturday night, sound exhausted. Bungles abound. Despite lovely moments, that disc (now available on Masterworks Broadway) comes off less as a living record of the show than as a hasty, sketchy post-mortem.

Maybe that was apt. The disaster that opened at the Majestic Theater on April 4, 1964, had already been in florid trouble out of town. One actor had a heart attack during a Philadelphia performance; a dancer caused a heart attack when she flew off the stage, into the pit and onto a saxophone player. Everyone else was left to squabble and panic. So perhaps it’s not surprising that when “Whistle” eventually got to Broadway, in a season otherwise notable for “Hello, Dolly!” and “Funny Girl,” it struck many theatergoers as chaotic and alienating. 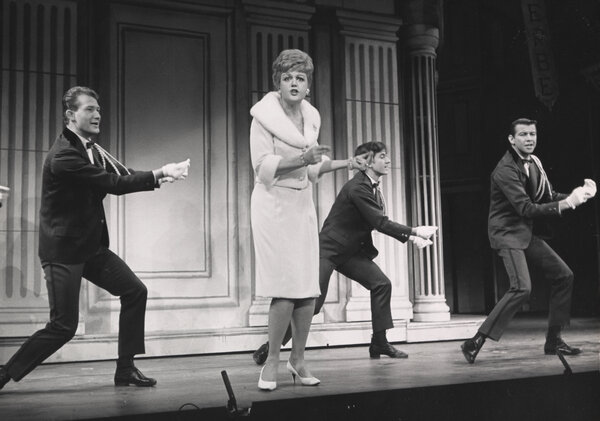 Chaotic it still is. Laurents’s satirical book, though clever and novel, works too hard at too many things, aiming darts at every -ism in its path: conformism, evangelism and cronyism among them. The gangly plot, involving a venal mayoress faking a miracle (Angela Lansbury in the original production), a repressed nurse with a French alter ego (Lee Remick) and a psychiatrist who’s actually a psychiatric patient (Harry Guardino), seems to be held together by spit and sarcasm.

But it wasn’t just the complicated book; audiences weren’t yet ready for the complications of Sondheim. Despite his score for “A Funny Thing Happened on the Way to the Forum” — a hit that was still running after two years on Broadway — he was mostly pegged as a lyricist, and his music for “Whistle” did not go over well. In The Times, Howard Taubman allowed that some songs were pleasing, “but not enough of them.” Another critic called the music, inaccurately, atonal.

Despite such judgments, several songs from “Whistle” — including “A Parade in Town,” “There Won’t Be Trumpets,” “With So Little to Be Sure Of” and the title song — are now widely performed. Smallish revivals over the years, and a starry Encores! presentation in 2010, demonstrated that much of the show could be redeemed by its score.

“A Parade in Town”

That’s because Sondheim uses the songs to tie the plot’s loose threads into tight knots. For the mayoress he wrote catchy pastiches that might have come from a witty chanteuse’s nightclub act. (The role was modeled on Kay Thompson.) For the repressed nurse he wrote angry diatribes and sad ballads expressing her disappointment in society and self. And for the faux-shrink he wrote, among other things, a wild 13-minute sequence, called “Simple,” in which the character drives everyone crazy under the pretense of sorting them into normals and nots.

To fit the show on one LP, Columbia made innumerable cuts and trims, as well as completely excising (as was then typical) most of the excellent dance and incidental music. All of that and more has been restored in the Jay version, which, at nearly two hours, runs 40 minutes longer than the original. True, some of the additional time is eaten up by Laurents himself, reading unnecessary narration. But much of the restored material deepens our appreciation of how, in this early score, Sondheim began to create his mature musical style.

A show about the divided self in a divided world could hardly be a better match for that style, built as it is on musical and emotional polyphony. Sondheim not only layers individual vocal lines into dense mille-feuilles of choral noise but also forces contrasting feelings into uncomfortable proximity with words that belie the tunes, and vice versa. The mayoress sings the most cynical thoughts to the most sinuous melodies; the psychiatrist uses the simplest musical forms to create chaos. Even the title song, sung by the nurse, contradicts itself: Anyone can whistle, but she can’t.

On the new recording, that number is gorgeously performed by Maria Friedman, swaddled in low strings. (The orchestrations, mostly by Don Walker, strangely lack violins.) What sounded muddy on the original cast album now sounds full-bodied, making the pathos richer. Likewise the blare of the brass in the mayoress’s numbers: “A Parade in Town” has never gleamed as brightly as in Julia McKenzie’s rendition. And John Barrowman turns “Simple,” which formerly felt like a dainty set of syllogisms, into a disturbing tour de force, building in an uninterrupted arc to its inevitable conclusion: “You are all mad.”

Some of that build comes from the brisk and buoyant conducting of John Owen Edwards and the bounty of 42 instrumentalists. (On Broadway there were 23.) The engineering is also notably vibrant; even Sondheim, who felt that Walker ignored his suggestions for improving the orchestral sound, has noted the recording’s “energy and sparkle.”

It’s true that energy and sparkle are mostly absent from the original recording. How could they not be, steeped as it was in failure? The new album was made under vastly different circumstances. For one thing, it had the benefit of time — perhaps excessive time. (The first sessions were in 1997 — which explains the participation of Laurents, who died in 2011.) And Sondheim, of course, is no longer a misunderstood longhair but an acknowledged master, his early work acclaimed both on its own merits and in light of what came later.

And yet failure has a kind of glamour that success cannot replicate. So even if the new leads are technically superior singers, delivering glossy, beautifully considered readings of the songs, there is something about the hoarse and heavy-hearted originals I miss. Lansbury and Remick and Guardino sound like they’ve been through an ordeal together; McKenzie, Friedman and Barrowman — who have never had to perform the whole show, just sing it — sound like they’re having a ball.

Well, that’s “Anyone Can Whistle” in a nutshell: a ball and an ordeal. Luckily, we can at last have both.