The central section of Canal Street, between the thrum of Chinatown and the maw of the Holland Tunnel, is a great artery only in the utilitarian sense. In the early 1800s, an actual canal moved water fouled by manufacturing waste to the Hudson River. Some planners imagined a Venice-like promenade, but it was rudely paved over instead.

Until recently, the stretch was home to surplus businesses — metal, plastics, rubber, glass, textiles — dotted with souvenir shops, often concealing counterfeit ateliers. It was a magnet for artists too: A few still live nearby, in lofts they’ve inhabited since the 1980s. For the rest, the area lost its main draw in 2014, when the art-supply mecca Pearl Paint closed.

“When New York was a producing town, this is where you would meet people in your field,” said Leon Ferrer, who works at Canal Rubber, one of a few such businesses surviving. “We were blessed to have an area like this.”

For the city’s powerful, central Canal Street is a problem to solve, and a redevelopment opportunity. First, Bloomberg-era rules made landlords liable for counterfeits in their buildings. Then developers bought out small owners, awaiting an upscale bonanza. It has yet to materialize. And this past year, the combination of the pandemic and windows being boarded up for fear of riots only deepened the anomie.

And yet here are artists, once again, doing what they do — messing up the story. 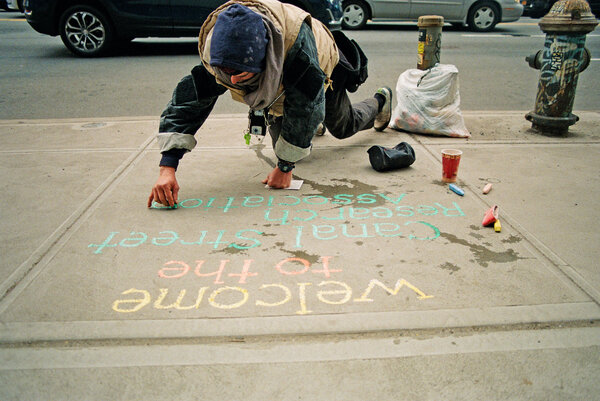 For the last few months, the storefront at 327, a weathered three-story building between Mercer and Greene, has gathered artists, street characters, neighbors like Ferrer and passers-by in quirky communion, raising ghosts of Canal’s past while planting new creative seeds.

As the temporary home of the Canal Street Research Association, invented by the artists Alexandra Tatarsky and Ming Lin, who worked with the curators Constanza Valenzuela and Jack Radley, it has been many things at once. It has been a physical venue for the pair’s Shanzhai Lyric art project, which considers bootleg — or shanzhai — goods, and particularly the oddball text on apparel, as the starting place for a kind of poetry. Here the conceptual project turns concrete, with bootleg items collected by the artists displayed with others that visitors bring in.

There has been art on view by friends; and books on economics, literature and philosophy. The fashion label Puppets and Puppets has presented new creations in the space. There have been window projections of art films with local connections. One depicts a 2006 performance on Canal of the artist Yoko Inoue unraveling American-flag sweaters, commissioned from artisans in Ecuador, into balls of yarn for sale.

And the project has become a memory bank. Tatarsky and Lin walked the length of Canal, photographing every facade, and tacked up the photographs in order in the storefront. Visitors have penciled annotations directly on the wall. The result, a kind of haphazard sociology, blends real-estate insight (“This sign pays for the whole mortgage”), art-history factoids (“David Hammons got the plastic moulds for his snowball sale here!”) and tales of hangovers, tattoos and other incidents.

The crowdsourced captions honor defunct spots like Dave’s Luncheonette (“After the Mudd Club at 4 a.m., all the artists would get chocolate egg creams,” reads a note from the Chinatown art-collective veteran Bing Lee); and living ones like Clandestino (“The least objectionable bar in NYC — I think?”).

Everything about the Canal Street Research Association is provisional.

The space was available because United American Land, the firm that bought the building in 2016, adding to its large portfolio along Canal Street, organized other landlords behind a pop-up model in the last few years to build buzz through art and trendy brands. But Wallplay, the creative agency that ran the program, folded in February, leaving the Canal Street Research Association to deal directly with a landlord unimpressed with their scruffy, bootleg-friendly energy.

Jack Laboz, a principal in United American Land, said the vision was to attract “a tenant like somebody from TriBeCa or NoLiTa, or an art gallery.”

Tatarsky and Lin, he said, “shed some light on the block, and it was fun to see.” Still, he was pulling the plug. The storefront venture will close Wednesday.

The artists, who are in their early 30s, are as local as it gets — demonstrating that you need not have been alive in the heyday of Basquiat and Blondie to be authentically Downtown. Tatarsky grew up in the East Village. Lin grew up steps from the storefront, on Walker Street. They have been friends since preschool.

As such, they said, they always valued the informal economy of Canal Street, whose businesses catered to both their craft and jewelry-making needs and their mild teenage rebellion.

“This is where you would get bootleg bags, get your first fake ID, try to buy a bong — those slightly illicit activities,” Tatarsky said. Visitors of all generations, she said, had shared similar memories.

During their storefront tenure, the pair also befriended the Senegalese sidewalk sellers of fake luxury-brand bags and belts whose trade makes up much of the area’s visible retail activity. They learned that many of these men had a creative streak of their own — musicians, photographers, griots. “Everyone on Canal Street is an artist,” Tatarsky said.

One vendor, Khadim Sene, began storing his djembe drums in the space, and performing outside the storefront with his group Sopé Bakhé. Another, Birane Seck, set up a coffee maker with supplies of spiced coffee he imports from Senegal.

“Khadim once said that the bags are for money, but the coffee and art is for God,” Tatarsky said. “Doing what you have to do and also having a spiritual or arts practice, those things aren’t in contradiction. And they’re facilitated in New York City by this kind of density and proximity.”

On a recent chilly Saturday, the characters included an elderly woman with a walker on an errand for craft supplies; a man pulling a cart of rugs for sale; and Day Sinclair, a young artist from Memphis who moved to New York in November without money or contacts — people still do this — and was working on a painting. “This space is fertile,” Sinclair said. “It’s open enough to enter.”

The vibe was ramshackle, but to connoisseurs, recognizable.

“When we first walked past, we were like, oh my God, there’s a Relational art project,” said Tom Finkelpearl, the city’s former commissioner of cultural affairs, referring to a method in which the art is not an object or exhibition, but a space for interaction.

Finkelpearl had strolled in with his wife, Eugenie Tsai, a curator at the Brooklyn Museum. Moments later, the artist Lu Zhang and her husband, Herb Tam, the curator of the Museum of Chinese in America, walked in. “I’m envious of what they’re able to do here,” Tam said. “They have a lot of people come in and engage based on Canal Street as a cultural space, a space of memory.”

A few days later, it was warm enough for street life. The drummers came out, joined by Babacar Top, a Senegalese choreographer who had strolled to Canal Street, he said, for a taste of home.

And if the Canal Street Research Association’s time was ending, it was only in this form. They will be moving immediately to a new space, at 264 Canal Street, an upstairs office open by appointment. Though no longer in a storefront, they said, they intend to continue street-level events for the next few months now that the weather is warming. (Their Instagram feed will have details.)

Perhaps it was meant to be this way. The concept of shanzhai encourages impermanence, they said. That term has come to refer to counterfeit goods, but originally it meant “mountain hamlet,” with roots in a Chinese tale in which robbers and other resisters fight a corrupt regime. The story itself has multiple versions, its authorship ambiguous.

Likewise, they said, Chinese landscape painting left empty space on the scroll, welcoming marks by future writers. Their photomap of Canal Street proceeded in that same spirit; and so would the project’s next iteration with their move to a new location.

“We are grateful to all shanzhai poets,” the artists wrote in an email. “The research continues.”