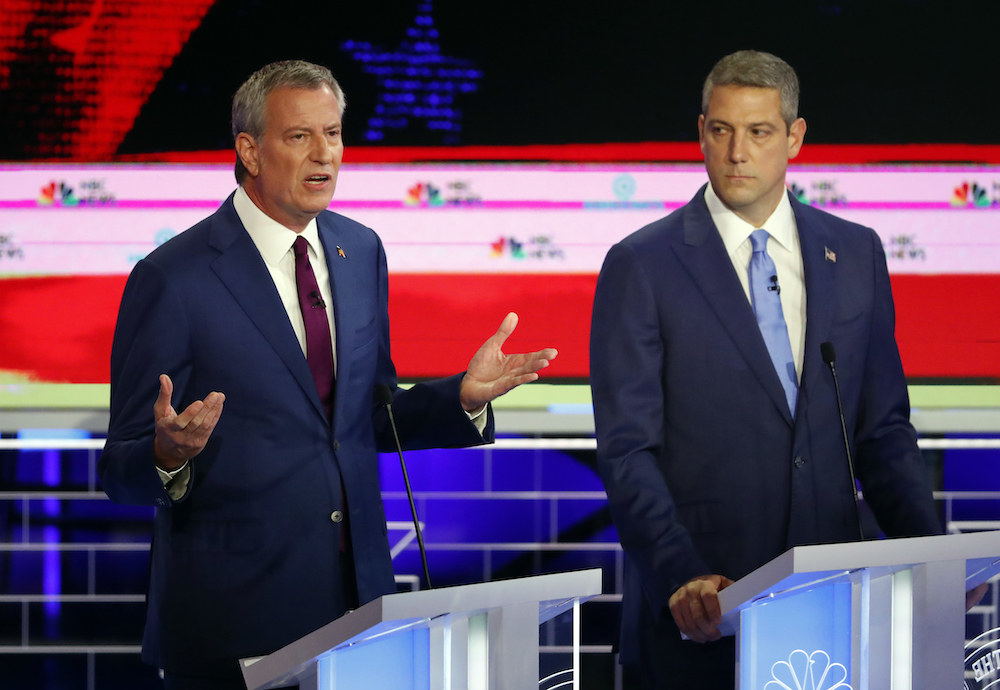 Bill de Blasio reminded an irritated New York media how he got himself elected mayor of the nation’s largest city, and why he is likely to be a more formidable figure than they expected in the Democratic primary.

De Blasio set the tone of Wednesday night’s Democratic presidential debate: Combative — he was the first to interrupt — and unabashedly ideological, electrifying what had been a sleepy round of introductions and repeatedly pulling the conversation to the left.

Early on, when debate moderators asked the candidates who among them would eliminate private insurance as president, only de Blasio and Massachusetts Sen. Elizabeth Warren raised their hands.

But de Blasio’s first big moment came when he interrupted Beto O’Rourke as the former Texas congressman explained why he did not support eliminating private insurance.

Later, the New York mayor later interrupted a second time, earning him camera time in a crowded and hotly contested debate. As New Jersey Sen. Cory Booker talked about Immigration and Customs Enforcement agents separating families, de Blasio stepped in to argue the entire conversation was off base.

“We have to change our discussion about immigration in this country,” he said. “Because look at the bottom line here: That tragic photo of that parent, that child — and I’m saying this as a father — every American should feel that in their heart. Every American should say ‘That is not America. Those are not our values.’ But we have to get under the skin of why we have this crisis in our system, because we’re not being honest about the division that has been fomented in this country.”

American citizens have been told immigrants created their problems, de Blasio said, but that blame is misplaced.

“For all the American citizens out there who feel you’re falling behind, who feel the American dream is not working for you, the immigrants didn’t do that to you,” he said, as the crowd broke into cheers. “The big corporations did that to you. The 1% did that to you. We need to be the party of working people, and that includes a party of immigrants, but first we have to tell the working people in America who are hurting that we are going to be on their side every single time against those big corporations who created this mess to begin with.”

De Blasio for the past five years has cultivated a sort of adversarial relationship with the New York City press corp that has prepped him to stand on stage with nine other candidates all vying for a moment. Many local headlines have suggested for months the two-term mayor had no chance of competing in the 24-person race presidential race.

De Blasio, who has long sought to be a national progressive icon, seemed to be enjoying himself on the debate stage and showed no signs of letting up — even when NBC cut to commercial.