It sounded like a fine idea at the time — pair two poetic giants of different generations and get them to collaborate on reinventing an American classic.

The year was 1969. The producer Stuart Ostrow and the director Peter Hunt already had a hit show on Broadway with “1776.” Now they were setting their sights on “The Devil and Daniel Webster,” Stephen Vincent Benét’s classic 1936 story about Jabez Stone, a New Hampshire farmer who sells his soul to the devil, has second thoughts, and enlists the orator and statesman Daniel Webster to argue his case before a jury composed of American villains. The tale had been adapted into a 1939 opera and a 1941 movie, but never a musical.

Archibald MacLeish, the three-time Pulitzer Prize-winning poet and author of the Tony Award-winning play “J.B.,” which reimagined the Book of Job, would write the book. The composer and lyricist would be Bob Dylan — decades before he proffered his songbook to Twyla Tharp for 2006’s “The Times They Are A-Changin’” and to Conor McPherson for “Girl From the North Country.” (That show’s Broadway run was interrupted by the pandemic.)

“Stuart had this idea that we would get the oldest poet of note and the youngest poet of note to work together,” Hunt recalled in a conversation earlier this year, before he died at 81 from complications of Parkinson’s disease.

“I thought coupling the Republic’s poet laureate and America’s balladeer was a unique invitation to young and old audiences,” Ostrow added in a recent email.

“Scratch” took its title from the name the devil calls himself in Benét’s story. MacLeish offered a deeply-considered meditation on the nature of good and evil, obliquely asking whether the ideals upon which America was founded could endure in the time of Richard Nixon and Vietnam.

The show would be the “opposite of a musical,” MacLeish wrote to Ostrow in papers now held by the Billy Rose Theater Division of the New York Public Library; “it would be a “ballad play,” featuring an actor in modern dress who would sing songs and serve as conduit between the audience and the action onstage.

As for what this 20th century troubadour would sing, well, that was Dylan’s job.

MacLeish proposed some song titles — among them, “Red Hands,” “Lower World,” “New Morning,” and “Father of Night,” and Dylan, who’d wearied of the limelight and was trying on new personas, started writing on spec.

The poet effused over Dylan’s initial contributions. “Those songs of yours have been haunting me — and exciting me,” he wrote to Dylan. “‘New Morning’ marries the opening as though they’d been intended for each other.” 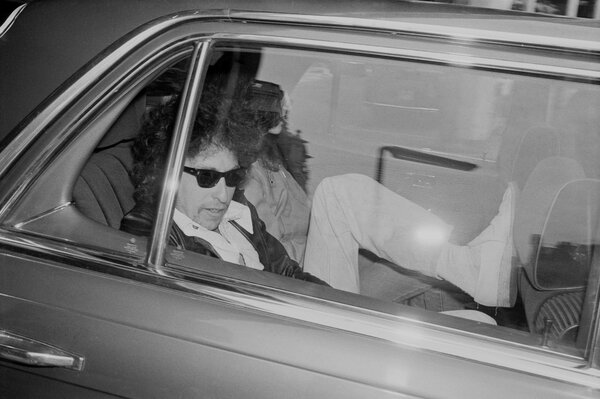 But Dylan and MacLeish were separated not only by age but by background, style, temperament, and sensibility. MacLeish divided his time between his western Massachusetts home and a private club in Antigua, and was the product of boarding schools and Ivy League universities. Dylan, a more instinctive, less deliberative artist, was the Minnesota-born son of a Jewish appliance store owner, and was, as he averred on “Rough and Rowdy Ways,” his latest album, “born on the wrong side of the railroad track, like Ginsberg, Corso and Kerouac.”

A disagreement over lyrics to “Father of Night” epitomized the difference between the two visions. Dylan’s song was full of oppositions (“Father of day, Father of night/Father of black, father of white”). MacLeish liked the melody but thought the song should comment more exclusively on the nature of evil; he suggested alternative lyrics: “Father of night, father of dread/Father of cold in the void overhead/Father of serpent under the stone/Father of fear in the dark alone.”

As relayed in Dylan’s fanciful 2004 memoir, “Chronicles: Volume One,” a meeting between the septuagenarian MacLeish and the 20-something Dylan — with the elder poet discoursing on Sappho, Socrates, Dante and John Donne — reads like deleted dialogue from the scene in “Trading Places,” when Eddie Murphy’s street-smart con man finds himself improbably welcomed into the home of blue-blooded Dan Aykroyd.

Inevitably, the creative process on “Scratch” devolved; the story of how that happened differs depending on who’s telling it.

“I backed out of the production,” Dylan wrote in the liner notes to “Biograph,” his 1985 collection of outtakes, bootlegs, and previously-released material. “It was nothing really, kind of like a misunderstanding I supposed.”

Then later, in “Chronicles”:“I knew that I couldn’t have anything to add to the message of [MacLeish’s] play. He didn’t need my help anyway.”

In his 2005 memoir “Present at the Creation: Leaping in the Dark and Going Against the Grain,” Ostrow, a quadruple Tony winner whose Broadway career spanned four decades, takes issue with Dylan’s version of events, to say the least. He presents the future Nobel Laureate as a monosyllabic dolt and poseur who froze in the presence of a true man of American letters and spent his time at MacLeish’s home pounding brandy, then conking out.

“The only impression the celebrated folk singer had made was a nasty ring from his brandy snifter on the MacLeish’s 1785 cherry table,” Ostrow wrote.

Despite his early enthusiasm, MacLeish soured on Dylan’s contributions. “Dylan proved incapable of writing new songs,” he wrote in a 1970 letter.

In an email, Ostrow put it more bluntly: “Dylan could not collaborate.”

Perhaps. But, seeing as Dylan had just released “Nashville Skyline,” which featured a duet with Johnny Cash, and, two years earlier, had worked with The Band on recordings that would become known as “The Basement Tapes,” the truth seems more specific: Dylan could collaborate when he felt like it, just not with Archibald MacLeish.

Ostrow and MacLeish considered presenting “Scratch” with songs that Dylan had already recorded, but when the show opened at Broadway’s St. James Theater on May 6, 1971, it did so as a straight play, starring Patrick Magee as Daniel Webster, Will Geer as Scratch, and Will Mackenzie as Jabez Stone.

Without the balancing voice of a contemporary songwriter, it registered as pompous and outdated, characterized by what The New York Times critic Walter Kerr called “echoes of a vanishing style.”

“It has a vacuum where its art should be,” wrote his fellow critic, Clive Barnes.

The actress Joanne Nail, who made her Broadway debut in “Scratch,” believes that MacLeish was “too married to his words,” which landed with audiences better out of town.

“We had played previews in Boston and people loved it there because it was about their area of the country, their history,” she explained recently. “But when we came to New York, Will MacKenzie and I thought it might be too long, and some of the dialogue was not going to fly. So, we went to Peter Hunt and told him, but Archibald didn’t want to change anything.”

“It was conceived as a musical, ergo it failed,” Ostrow said simply, by email.

As for Dylan, months earlier, he had released “New Morning,” a collection of a dozen new songs, including the title track and his version of “Father of Night.” It was, Greil Marcus wrote in the Times, “his best album in years.”

Next in Unopened: Patti LuPone’s first-act ballad became a standard, but the show it came from never did.