Caramoor Invites the Birds to Take Part in a Songfest

KATONAH, N.Y. — Birds have always participated in concerts here at Caramoor, where the performances are open-air. Especially in the early evening, they lend their voices and sing their songs. Why not? They live in the tall trees and bucolic grounds of this former estate. The musicians are just visitors.

But this weekend, Caramoor welcomed the birds outright and stirred conversations between human and avian musicians in a series called “Caramoor Takes Wing! Celebrating Birdsong.” The main offering was a magnificent performance of Messiaen’s “Catalogue d’Oiseaux” (“Catalog of Birds”), a dauntingly difficult suite of 13 piano pieces lasting more than two and a half hours, performed by Pierre-Laurent Aimard in three installments over two days.

Messiaen was fascinated with bird song from his early years. But in the “Catalogue,” written between 1956 and ’58, he explored it with almost obsessive intensity, making each piece a portrait not just of a particular species, but also of its region in France — the colors, temperature and “perfumes,” as he called them, of the landscape.

To broaden its scope, this mini-festival included an outdoor performance of John Luther Adams’s “songbirdsongs” by the Sandbox Percussion ensemble and two piccolo players, along with two Sunday morning bird walks, facilitated by the Bedford Audubon Society, and a panel discussion that asked if it was a stretch to describe the vocalizations that birds make as song.

Are birds just conversing, in their own wondrous ways? Do they make music, as humans think of it? 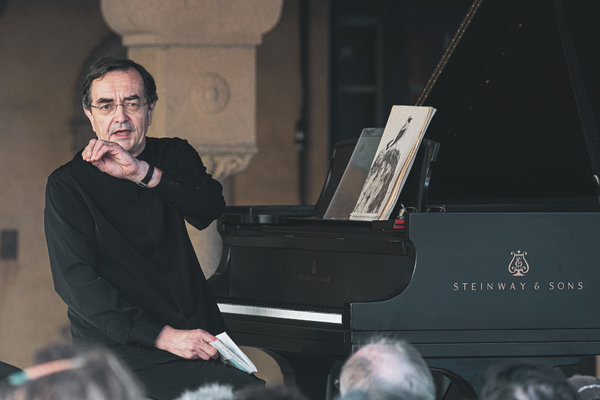 Musicians have been fascinated with bird song since ancient times. Vivaldi’s most famous piece, “The Four Seasons,” is rich with evocations of birds, as the sonnets accompanying these concertos make clear. So the festival got off to an early start on Saturday afternoon, when the mandolin virtuoso Avi Avital was the soloist with the Venice Baroque Orchestra in a program that included “Summer” from “The Four Seasons,” with Mr. Avital playing a version of the elaborate violin solo part.

But the idealized bits of chirping and cuckooing that Vivaldi folds into the music are nothing like the astonishing sounds of actual birds that hooked Messiaen — extremely high registers, breathless tempos, uncanny rhythmic complexity and accuracy, bursts of notes that can sound like pointillist atonal riffs.

The series began in earnest early Saturday evening in Caramoor’s Sunken Garden, where the clarinetist and naturalist David Rothenberg engaged in a live improvisation with the birds. As bird sounds drifted into the area Mr. Rothenberg imitated them. But it took his turning on a recording of such sounds to really get the conversation going.

As dusk passed into night and Mr. Aimard appeared in the Spanish Courtyard to play the first installment of the Messiaen cycle, birds were chirping away. To me, it seemed like Messiaen’s music inspired them to join in even more.

Episodes of bird song alternate with passages that unfold in thick, resonant harmonies, like dense chorales, or restless spans of leaping cluster chords that seem to reflect the emotions the birds stir up. Early on Sunday morning, at 7:30, it seemed that scores of birds were ready and waiting when Mr. Aimard began the second installment. In “Le Bouscarle” (“The Warbler”), the pointillist webs came so thick and fast that even the most fiercely modernist pieces of Pierre Boulez, a Messiaen student, would have sounded tame by comparison. Yet the piece was also rich with gorgeous harmonic episodes and delightfully twittering runs.

The question of whether birds sing, as we understand it, came up first thing during the panel discussion. The ornithologist J. Alan Clark said that, to him, whether you refer to bird songs, or calls, or vocalizations is just semantics. Yes, some birds, especially males, sing to announce their presence and stake a territory in order to attract a mate, he said. But, citing the ornithologist Richard O. Prum’s recent book “The Evolution of Beauty,” Mr. Clark added that birds, like many animals, may have an innate appreciation of beauty that inspires their singing. For his part, Mr. Rothenberg questioned whether what people do should be called music. After all, he said, birds were around, and making their sounds long before we were.

In his comments, Mr. Aimard placed “Catalogue” in the context of Messiaen’s development as a composer. During the 1950s, he said, Messiaen was in a creative crisis. Music was going through radical changes, with avant-garde techniques like serialism capturing the intellectual high ground. Messiaen genuinely loved birds. But he also saw the modernist qualities of their songs as a means to develop his own musical language.

The most challenging aspect of these pieces concerns their episodic structures. Each one came across like an arbitrary series of events, despite many recurring bits. The most extreme is the cycle’s central work, “La Rousserolle Effarvatte” (“The Reed Warbler”), an audacious 30-minute piece, at once engrossing and confounding. Still, as played by Mr. Aimard to end the series on Sunday afternoon in the Venetian Theater, every scintillating, teeming and intense moment hooked me.

It was a perfect touch that in a space above a row of lights near the stage there was a bird’s nest. A mother bird kept flying in with what looked like morsels of food to feed her family. Other birds visited, too — sometimes to sing, sometimes just to listen.

Anthony Tommasini is the chief classical music critic. He writes about orchestras, opera and diverse styles of contemporary music, and he reports regularly from major international festivals. A pianist, he holds a Doctorate of Musical Arts from Boston University. @TommasiniNYT