Welcome to Best of Late Night, a rundown of the previous night’s highlights that lets you sleep — and lets us get paid to watch comedy. If you’re interested in hearing from The Times regularly about great TV, sign up for our Watching newsletter and get recommendations straight to your inbox.

Every Trick in the Unread Book

The economy took a hit this week, with the stock market suffering its second-worst drop of 2019, and the late-night hosts did their best to soften the blow.

“Trump’s got about how long, 15 months? Fifteen months to keep the economy from collapsing before the election, so you can expect him to use every trick in the book he has never read.” — STEPHEN COLBERT

“He’ll try every financial maneuver he knows: getting a shady loan from Russia, telling his blackjack dealers to stick on a soft 17. And if all else fails? Selling Dr. Trump’s patented anti-recession elixir. The delicious mercury makes you forget what money was.” — STEPHEN COLBERT

“Even more concerning is that Trump’s allies are worried that he is running out of tools to fix the economy. Running out of tools. When Trump heard that, he was like, ‘Not true, I have Eric and Don Jr. — I have more than enough tools.’” — JIMMY FALLON

“The stock market has been swinging like a tetherball in a typhoon. It’s all because of fears of an economic downturn. In fact, former Treasury Secretary Lawrence Summers puts the odds of a recession at about 50-50. So, you can just flip a coin — no, wait, save the coin! You’re going to need it to buy potable water in the afterscape.” — STEPHEN COLBERT

“Despite major Wall Street losses yesterday and global fears of a recession, President Trump tweeted today, ‘Consumers are in the best shape ever, plenty of cash, business optimism is at an all-time high.’ And then the mayor from ‘Jaws’ tweeted, ‘Beaches open — no sharks in sight.’” — SETH MEYERS

“Now get this: In Ohio, the Guinness world record was just broken for most people scratching Lotto tickets at the same time. Even worse, that’s Trump’s plan to fix the economy.” — JIMMY FALLON

“I’m not saying the economy is in trouble, but right now, giving money to John Hickenlooper’s presidential campaign is a better investment.” — JIMMY FALLON

“If things do go south, Trump knows who to blame, tweeting ‘the fake news media is doing everything they can to crash the economy because they think that will be bad for me and my re-election.’ Yes, this is all a plot by those masters of economic strategy: newspapers! They want a recession so more people buy the Sunday edition to use as a blanket.” — STEPHEN COLBERT 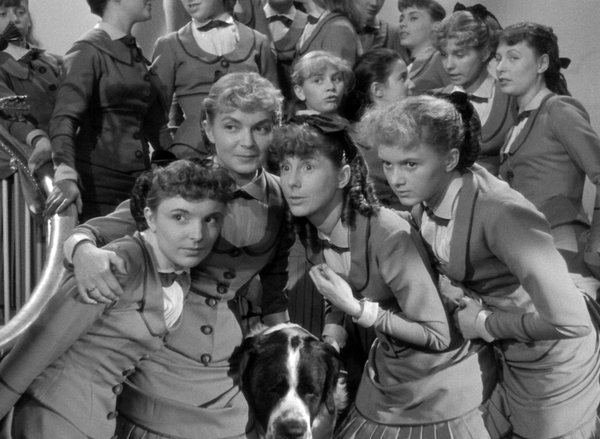 Jacqueline Audry’s Sapphic boarding school film from 1951, “Olivia,” has been digitally restored and will be screened in select theaters this weekend.