In 1988, the Dia Art Foundation hosted one of the most momentous readings in postwar art history — the reclusive poet James Schuyler appeared before an audience for the first time in memory, occasioning a line down Mercer Street to the foundation’s SoHo headquarters. One particularly lovely turn in Schuyler’s poem “Empathy and New Year” elicited a hum of admiration from the crowd: “Not knowing a name for something proves nothing.”

The sentiment could have been written as a maxim for Dia itself. What was this unusual, diffused, at times unstable art organization, exactly, and did it matter if no name quite suited?

Founded in Manhattan in 1974 by the art dealer Heiner Friedrich, his wife, Philippa de Menil, an heir to the Schlumberger oil-field company, and the art historian Helen Winkler, it has never operated like a museum by any conventional measure. It didn’t have a central location to display its collection for nearly three decades, until opening Dia Beacon in a vast former box factory along the Hudson in 2003. Before Beacon and since, around the American West, Europe, Long Island, New England and Manhattan, it has maintained numerous discrete sites, several of which came and went along with the foundation’s changeable fortunes and leadership. 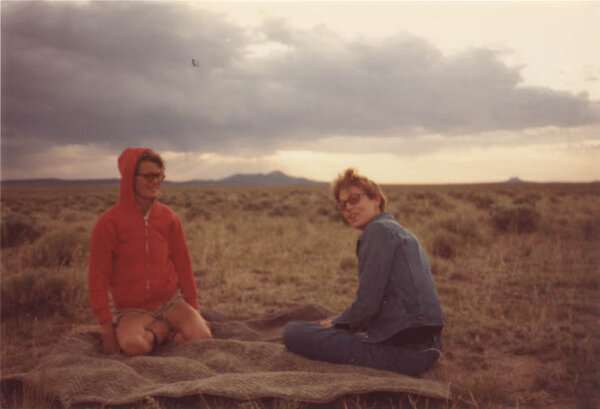 At various times, it held stakes in a hilltop castle, an extinct volcanic crater, a defunct Army base and a Sufi mosque — unorthodox homes, to say the least, for a core of work from the 1960s and 1970s that was rooted in Minimalism and Conceptualism but branched off in curious ways that had little to do with either.

Now, after decades of unrealized plans to find or build a new home in Manhattan, the foundation has opened a central hub on West 22nd Street in Chelsea that knits three of its existing industrial buildings into one of the largest single spaces Dia has ever had in the city.

The rough-hewed galleries — to be used for long-term exhibitions, often of commissioned work by younger artists — represent a homecoming, in a sense, for a place the foundation never really left. But its now-you-see-it-now-you-don’t existence over so many years blurred awareness, by even informed art lovers, that Dia consists of substantially more than a popular blue-chip collection in the Hudson Valley.

“We’d lost an audience, lost relevance, lost a connection to the city by not being open in New York for so long and just having Beacon,” said Jessica Morgan, who took over as director six years ago and quickly scrapped a $50 million plan to build a new multistory home in Chelsea, one of several architectural visions that pushed the foundation’s fund-raising ability past its limits.

Beyond money, the project ran counter to Dia’s very temperament. It has never built from scratch. It has instead supported immense land art pieces conceived beyond the bounds of the built world. And in cities it has always recycled existing buildings, melding their industrial contours with work created in just such spaces, by artists like Donald Judd, Walter de Maria and Richard Serra.

The foundation used those buildings to provide work, by museum standards, with untold space and viewing durations that were unusually long or even permanent. Friedrich, who cast himself and Dia’s founders as modern Medicis, likened this philosophy to the almost spiritual certitude that Giotto’s frescoes will always be there in Padua when you step into the Scrovegni Chapel.

Over the last several years, the foundation and Morgan have been quietly at work less on construction — the Chelsea site, even with a sleek new bookstore, is notable mostly for a studied inconspicuousness — than on figuring out how to re-engineer Dia’s tightly-bounded ethos to keep it vital in an art world now moving steadily beyond the mostly white, mostly male, sometimes swaggering heart of its founding collection.

In only the last two years, it added the first works by African-American artists — the conceptualist Charles Gaines and the painter Sam Gilliam — to its permanent holdings, with plans for major presences by the painter Jack Whitten, the sculptor Melvin Edwards and the sculptor and performance artist Senga Nengudi over the next three years. The Detroit techno producer Carl Craig ’s hit sound-and-light installation “Party/After-Party” was the most visible example of the change afoot when Dia Beacon reopened from lockdown last summer. Since 2015, the foundation has also added work by 13 women, so that of 57 artists in the collection, 19 are now women. (The first substantial body of work by a woman, the painter Agnes Martin, didn’t enter the collection until 2002.)

“There was a barometer at Dia of what I call muscularity, ” said Dorothea Rockburne, whose mathematical, sometimes ephemeral work was acquired in 2018 and given spacious, overdue galleries at Beacon among peers like John Chamberlain and Robert Ryman.

“That barometer sucked, to be blunt, and the situation is only very grudgingly changing,” said Rockburne, 88, who added: “Heiner Friedrich had a great eye. Sexist, but a great eye.”

Friedrich, in a recent interview at one of the foundation’s many scattered sites, the Dan Flavin Art Institute in Bridgehampton, N.Y., said that the art world in which his sensibility was formed was overwhelmingly male and that he was generally pleased to see the canon he helped establish being widened. But he said he continued to believe that “artworks speak for themselves” and that additions to complement and extend Dia’s history should not be chosen based primarily on whether work was made “by a woman or a man, or someone of black color, red color, green color.”

Friedrich, 83, who has not been directly involved with the foundation since a coup over faltering finances in 1985, added that he applauded Morgan’s decision to concentrate on art and artists over building. But he said he felt that the foundation, to remain fully true to itself, still needed to establish permanent Manhattan sites for displays of iconic works from the collection, like Andy Warhol’s “Shadows” series, on view in Beacon; the German painter Blinky Palermo’s grand syncopated painting suite “To the People of New York City”; and “Dream House,” the immersive sound and light environment by La Monte Young and Marian Zazeela.

“Worldwide, everything is changing exhibits,” he said. “Changing events. Changing everything. What is completely misunderstood is that certain works of art must have lasting presence. If you see them over time, they change your presence.”

Such a commitment to single bodies of art by a relatively small group of artists is not only financially arduous in New York but also swims against the contemporary tide, as museums work to keep their collections in evermore dynamic rotation and tell multiple, overlapping stories of art’s history.

“Even decades ago, it didn’t quite compute,” said Donna De Salvo, a veteran curator who worked for Dia in the tumultuous 1980s and returned in 2019. “Part of my job back then was to try to find places to show parts of the collection we couldn’t show. I’d ask museum directors for a minimum six-month commitment. They’d say, ‘Wow. What a great idea! But who has enough real estate to give one artist that much time?’ ”

Gilliam, 87, who had early success but whose work, like that of many Black artists of his day, was substantially overlooked for decades, said being given a signature presence at Beacon was akin to seeing work over time in his studio, “which is like your instrument and where there’s no place you’re happier being, if you’re a real artist.”

“I saw a lot of my paintings for a long time because no one wanted them,” Gilliam said. “The day I walked into Dia and saw the rooms where the work of mine was going to be was one of the best days of my life. It’s that kind of place, where you feel like you’re part of a continuity.”

Lucy Raven, a multimedia artist, has been at work for the last three years with Dia curators to inaugurate the Chelsea space with two new works, a kinetic light sculpture and a film about the destructive transformation of rocks into concrete, a kind of inverse land-art piece.

“Having moved here from Arizona, Dia was striking for me because it was in the city but on the other hand it was supporting all this monumental art work out West,” Raven, 44, said. “At the time I got to know it, it seemed like a kind of archival situation, not a place that was in the cards for a younger artist like me to be part of. But then you could see that was changing.”

She added: “It certainly hasn’t been lost on me that I’ve been working with a team almost entirely of women there now.”

Dia’s curators have been working for years on the knotty calculus of determining which artists and works, like Raven’s, make sense in the foundation’s highly particular biome. Much of their time, Morgan said, has been directed toward “thinking about who was not in the collection and why and let’s move beyond the same tired history that we hear over and over again because we all know that there are different stories to tell.”

Artists and ideas on the horizon, possible but not yet set in stone, Morgan said, tend to lay further afield than Dia has ranged in the past: a project with the Indian artist Sheela Gowda, 64, in Bangalore; others with the Mexican writer and activist Valeria Luiselli, 37, and the Colombian artist Delcy Morelos, 53, whose practice in ceramic and clay speaks partly to her country’s history of violence; and a permanent land-art site in Puerto Rico.

Morgan said her greatest hope for reopening in Chelsea is that it will make its strongest statement by declining to make an architectural statement.

“This is the road we chose — not to spend tons of money on something but to prioritize giving money to artists and to an endowment so that we can continue to do what we do best,” she said. Especially now, as institutions around the world reel from the pandemic’s financial blow, cutting programs and staff, she said she believed Dia’s instinct to remain low to the ground was prescient. And lucky.

“Money has often gone to the wrong place, I think, vanity projects for one person or another,” she said. “I don’t know any artists who are really into those kinds of spaces. Do you?”