Another Trump family member is headed to Florida. This time it’s Donald Trump Jr. and his girlfriend Kimberly Guilfoyle who are setting roots down in the Sunshine State to join father Donald Trump, sister Ivanka Trump, and an ever-growing list of relatives. With the purchase of a $9.7 million mansion in the exclusive Admirals Cove neighborhood in Jupiter, Florida, Donald and Guilfoyle officially have a new place to call home. 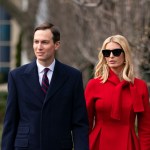 The couple unloaded their Bridgehampton, New York beach home recently, then turned around and got a great deal on this 11,270-square-foot Jupiter, Florida home with six bedrooms and 11 bathrooms. The couple paid a cool $9.7 million, a steal of a deal according to the New York Post which notes it was originally listed in 2017 at $19.9 million. It’s a place that has a specific type of buyer given the gargantuan size of the home and its many, many amenities (see all of the Realtor.com photos here), and it seems Don Jr. is that buyer.

The home was recently updated and is designed for the person who wants “a fabulous coastal style,” according to Realtor.com. There’s lots of outdoor living to be had with a deck, screened-in porch, built-in grill and a patio — if you want to be outside, this is the place to do it. The massive pool also overlooks the Florida bay with a dock for a boat so there are plenty of scenic views while entertaining guests.

The inside decor is described as “clean-line white contemporary finishes, blended with some traditional textures,” so there’s definitely some style contrast at work here. There’s no doubt it’s an entertainer’s home, though. The open-floor plan on the first floor shows that the kitchen and living room will easily be the main hub for socializing. Trump and Guilfoyle will never have to leave the house if they don’t want to either, because the home office with built-in bookshelves is just a step away from a spa room, fitness center and a game room complete with a full bar.

The large home is also convenient for Donald Trump Jr. because his five children with ex-wife Vanessa Trump, sons Donald III, 12, Spencer, 11, and Tristan, 9, and daughters, Kai, 13, and Chloe, 6, live in the area. We are sure dad and Guilfoyle are looking forward to slumber parties and celebrations with kids at their new estate.

This move to Florida isn’t a surprise to anyone who has followed the family after they left the White House in January. The Trumps consider Florida their new home after New York City proved itself to be a less-than-friendly place for them to return after four years in Washington, D.C.  “There is no way they can stay in New York. They’d be tortured in the streets,” a source told the New York Post.

It’s unclear what Donald Trump Jr. is plotting next for his career, but we know that the entire family wants Florida to be their home base as they strategize their next political move. And they now have a big home for all of the Trump family to gather.

Before you go, click here to see the biggest and most expensive celebrity homes.