The last few months of Donald Trump’s presidency were marred by chaos and confusion after he lost the election. One of the key moments to highlight those tumultuous days involved Rudy Giuliani and his campaign to get the election results overturned amid his allegations of voter fraud. The message behind that press conference was completely lost, thanks to hot television lights and the former NYC mayor’s hair dye. 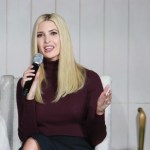 
Ivanka Trump’s Consulting Fees Could Make Her a Legal Target

Michael Wolff’s upcoming book, Landslide: The Final Days of the Trump Presidency, chronicles how Trump reacted to his personal lawyer’s literal meltdown in front of the world. Despite delivering a message important to the administration, Giuliani started sweating “three minutes into his presentation,” but the drips of salty water wouldn’t stop, per an excerpt from the book. The stream of water hit his chin and eventually made his glasses slide off his nose — it was bad.

“Then, thirty-two minutes in, a rivulet of black hair dye started to run down his face. Then the rivulet grew wider, tributaries of black and deathly gray,” wrote Wolff. “Curiously, you could not immediately see it from the in-person seats. But you could see it on television, and in seconds, Twitter lit up in wonder and incredulity. Everybody in the audience in person, agog, was pointing at their phones and then looking up and pointing at the mayor.”

According to Wolff, Trump was “pissed” at what was happening before him. He reportedly said, “What’s going on with this s**t dripping off his face?” The worst part of the entire press conference was that Giuliani knew he was sweating as he passionately delivered his talking points, but had no idea it was draining the color from his hair — and becoming a social media trending topic. Even Stephen Miller, Trump’s senior policy advisor and speechwriter, knew this was a disaster and commented to Newsmax’s Sean Spicer. “No, this isn’t happening,” he said, per Wolff.

Giuliani’s running hair dye seemed to be a metaphor for the wild and uncontrolled time for Trump during his administration. The president’s key messaging about election fraud was lost at that moment because an overheated room and some inconvenient sweat took over the nation.

Click here to see all the times Donald Trump has gone off about celebrity women’s looks.