AMSTERDAM — In a decision watched closely by restitution experts, a court in Amsterdam ruled on Wednesday that the Stedelijk Museum there can retain a Wassily Kandinsky painting that it acquired during World War II and which came from a Jewish collection.

The 1909 work, “Painting with Houses,” has been the focus of a restitution battle that has been viewed as a litmus test for Dutch restitutions policy. Critics of the Netherlands’ approach say the case represents an attempt by the Dutch to weigh the interests of its museums over justice for the victims of Nazi looting and their heirs.

Earlier this month, a committee established by the Dutch minister of culture, known as the Kohnstamm Committee, found fault with the Restitutions Commission, recommending that it change course and take a more “empathetic” approach to claimants. In response to the report, two members of the Restitutions Commission, including its chairman, resigned.

As a result of the report, lawyers for the Jewish claimants in the Kandinsky case and international restitutions experts anticipated that the Amsterdam court would overturn the previous decision by the Restitutions Commission. Instead, it upheld it. It found that the advice of the commission “cannot be annulled” because the court found no “serious defects” in its reasoning.

“I never expected this,” he continued, not after the Kohnstamm Committee published its report, “and also on the legal merits we had in this case.”

Touria Meliani, Amsterdam’s alderwoman for culture, issued a statement through her spokeswoman, Marit van Kooi, without expressing an opinion about the decision.

“We are well aware that this is disappointing for the claimants,” she wrote in an email. “This painting will forever be linked to a painful history. The relationship of our collection with the Second World War will always be important; we will continue to show information about this to the public, online and also in the gallery.”

Marie-Jose Raven, a spokeswoman for the Stedelijk Museum, said in an email that the museum feels it conducted sufficient research into the history of the artwork to establish its case. “This is not a matter of vindication or being happy about a decision,” she wrote. “We find it important that justice is being done to history, and want to be transparent about the history of the collection we foster.”

She explained that the wall text next to the painting displayed in the permanent collection exhibition will be updated to explain the complex story of the work. Now it will also read, “The Stedelijk Museum deems it important that the history of this work now has been investigated as thoroughly as possible, and that after years of independent research, the Restitution Committee has been able to arrive at a binding advice.”

The prewar owners of the Kandinsky were a Jewish couple, Robert Lewenstein and Irma Klein, who were in the process of divorcing during the war. The Nazis invaded the Netherlands in May 1940, and five months later, in October, the Kandinsky was sold at auction in Amsterdam, while Mr. Lewenstein was in France and Ms. Klein was in Amsterdam. There is no clarity about who sold the painting, although, according to the Stedelijk, it is “possible that this had been an involuntary sale.” 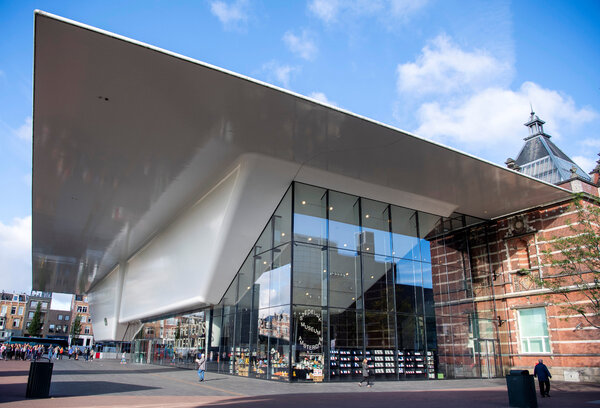 The Stedelijk Museum bought the work for 160 guilders at auction, at Frederik Muller auction house in Amsterdam — a price that was about 30 percent of the 500 guilders Mr. Lewenstein’s father, Emanuel Lewenstein, had paid for the work when he bought it in 1923. Lawyers for the claimants, whose names were not disclosed in the case, say the sale was motivated by the Nazi persecution of Jews in the Netherlands. The Stedelijk and the city argued that it purchased the work “in good faith,” without knowing of its Jewish ownership.

In 2018, the Dutch Restitutions Commission rejected the Lewenstein heirs’ claim for the Kandinsky, arguing that the motivations for the sale were unclear. It also used something called the “balance of interests” test to weigh the value of the work to the museum against that of the heirs.

As the Commission concluded, “the work has important art historical value and is an essential link in the limited overview of Kandinsky’s work in the Museum’s collection,” whereas the heir didn’t demonstrate “past emotional or other intense bond with the work.”

James Palmer, the founder of the Mondex Corporation, an art restitution company that represents the claimants in the Kandinsky case, said this “balance of interests” test was biased toward the interests of the Dutch state, which wanted to keep the work.

He said the court’s decision represented “a second despoliation of the painting.”

“The first was by the Nazis,” he said, “and the second was by the Dutch Restitutions Commission, now in conjunction with the Amsterdam City Court.”

Mr. Hagedorn, the Dutch lawyer representing the claimants, said he would appeal the decision.

Aerie’s viral crossover leggings are finally back in stock