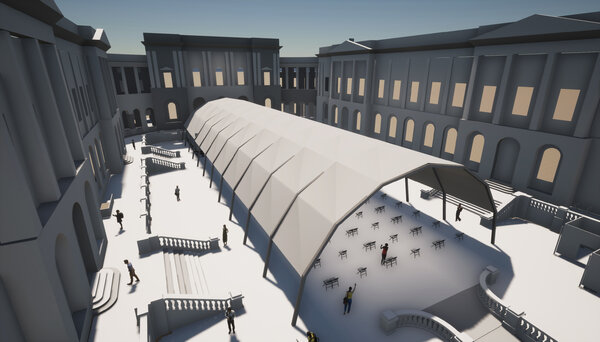 LONDON — The Edinburgh International Festival, a showcase of international dance, music and theater, will go ahead in front of audiences this August, the festival’s organizers said on Tuesday.

The festival, which normally floods the city with tourists, was canceled last year because of the coronavirus pandemic. But events will be staged Aug. 7-29 in three pavilions across Edinburgh, Fergus Linehan, the festival’s director, said in a telephone interview.

The pavilions will be specially built to maximize air flow and allow social distancing, he added.

The festival’s program will be released in June, Linehan said; the organizers are still waiting for a decision from the Scottish government about how many people will be allowed to attend. But the ongoing pandemic and the limits it has placed on international travel mean it will have a different flavor from normal.

“In terms of the people onstage, we’re not going to be flying in a big dance company from the U.S., or an opera company from Paris,” Linehan said. “But there are individual artists coming.”

The festival, which began in 1947 with the aim of uniting people through culture after World War II, is known for large-scale performances, especially of big classical and operatic works. The 2019 festival, for instance, featured the Orchestre de Paris performing epic pieces by Beethoven and Berlioz, as well as several presentations by the Komische Oper Berlin. That will also change this year. “We can’t have that many musicians onstage, and we can’t have those big choral bits,” Linehan said, but he insisted smaller works would be just as exciting and innovative.

Many performances will be streamed free for international audiences, he added.

Coronavirus cases have fallen rapidly in Scotland this spring thanks to an extended lockdown and a strong vaccination program. On Monday, there were only 199 new cases reported among a population of around 5 million, and no deaths within 28 days of a positive test, according to Scottish Government figures.

But many restrictions are still in place, including on cultural life. Museums cannot reopen until Apr. 26. Other cultural activities cannot restart until May 17 at the earliest, and even then, only with small audiences.

The Edinburgh International Festival is one of a host of arts events that normally take place in the city each summer. The festival’s organizers insist the others will occur in some form, too.

A spokeswoman for the scrappy Edinburgh Festival Fringe, which normally features thousands of small theater and comedy shows, said in an email that organizers were working toward an event to run Aug. 6-30. It was still unclear if the Fringe would be “digital, in person, or both,” she added.

The Edinburgh International Book Festival will also proceed from Aug. 14 with in-person events “if circumstances permit,” a spokeswoman said in a telephone interview.

The Royal Edinburgh Military Tattoo, a popular series of parades involving bagpipe performances by armed forces from around the world, is also set to go on. It started selling tickets last October but has not provided any updates since. On Tuesday, its organizers did not respond to a request for comment.

Linehan said he hoped the International Festival’s announcement would give confidence to other events to press ahead with plans. His festival won’t make any money, he said, but that didn’t matter. “This is a really momentous moment for us,” Linehan said, adding: “It’s really important we get back to live performance.”