Not long after we moved to Japan, I came to appreciate the public obsession with flowers.

During our first season of cherry blossom viewing, known as hanami, our family traipsed along avenues near our Tokyo apartment, tilting our heads back to marvel at the throngs of pastel blooms above us. I was agog, and like many of those walking around me, snapped dozens of pictures on my cellphone, trying to capture the essence of their perfect beauty.

Across the city, there are carefully tended stands of trees along many boulevards and rivers, as well as lovingly cultivated gardens. And while Tokyo is one of the most densely packed cities in the world, flowers are abundant here in everyday places.

It’s in the unassuming flora that I find the most pleasure: the weeds sprouting behind a rusted guard rail, or an unkempt shrub of scarlet berries climbing up a drain pipe on a dilapidated house.

During long waits between games at my son’s soccer tournaments, I would find myself exploring the sidelines, crouching down for a close-up of a bright petunia or a clump of clover dotted with spiky lavender blossoms. Along the trail where my daughter ran cross-country meets, I would look up to admire the sun-dappled trees.

Back in Brooklyn, before moving to Japan to become Tokyo bureau chief for The New York Times, I hadn’t been a particularly horticultural person. My husband and I used to joke that it was a miracle our two children managed to thrive given our poor track record with house plants. While we were avid supporters of the Brooklyn Botanic Garden, where we had our second date, for us the annual Cherry Blossom Festival there was as much about the taiko drumming and bento boxes as it was about the flowers.

Here in Japan, though, I soon discovered that I am easily enchanted by the flowering profusion. I’m especially drawn to anything with an unusual hue or a funky shape. 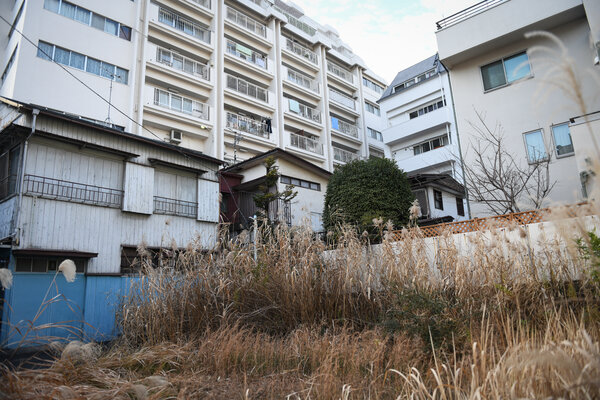 Most of the time, I have no idea what kind of flower or plant or tree I am looking at. But that only enhances their allure. Particularly during the pandemic, when many of us have been working from home and stresses have mounted (the recent earthquake here didn’t help), hunting for flowers has become a way to soothe anxiety.

After two days when I didn’t leave our apartment because I was covering the resignation and replacement of the president of the Tokyo Olympics organizing committee, I walked to the grocery store and spotted tiny pink and cream winter daphne blossoms nestled in some bushes out front. For a moment, tension evaporated.

Another day, a pot of fuchsia, sitting on a cracked section of pavement, can take the blues away. Even after grief and loss, I think: There’s still this.

On a recent walk through a residential neighborhood, I stumbled upon an abandoned lot overgrown with wispy straw-colored susuki grass, peaceful beneath a blue sky crisscrossed by cotton-batting clouds. At a time when so much travel is curtailed, I could imagine I had whisked to the countryside for a walk in a wild field.

This past February, following a few intense weeks of reporting on the severe coronavirus outbreak that occurred aboard the Diamond Princess, a cruise ship docked in Yokohama, I snatched a few hours off on a Saturday and cycled with my family to the Meguro River Green Belt on the outskirts of Tokyo.

We parked our bikes and strolled along the meandering path. I stopped frequently to snap photos of all kinds of plants, running to catch up with my husband and children, who were not as transfixed by every leaf and petal.

I could not resist the pink and white flowers that resembled sea anemones, or a patch of what looked like tiny green pinwheels. A small sign stuck in the soil labeled them “hot rips,” a designation that did little to enlighten. But I was refreshed.

Reverence for flowers is deeply embedded in Japanese culture. While the cherry blossom, or sakura, is the most celebrated floral icon of Japan, frenzied viewing expeditions to witness the seasonal blooming of multiple varieties are common across the country.

People travel to Hitachi Seaside Park in Ibaraki Prefecture to see the hills carpeted in blue nemophila in the spring. Flowing purple wisteria attracts hordes to Ashikaga Flower Park in Tochigi in May. The Furano fields of lavender in Hokkaido are a famed destination in July and August.

Pre-Covid in Tokyo, we often jostled with tourists from abroad wielding selfie sticks and local residents aiming telephoto lenses when we went to admire hydrangeas in summer or ginkgo and maple trees in the fall.

The city packs a verdant punch despite its relatively small green space: The amount of greenery per person is about a quarter of that in London, New York and Paris, Mr. Sakashita said.

“I think that having a little nature close by is good for both the body and the heart,” he added.

“Your photos are even more soothing than the recordings of Tibetan singing bowls I’ve been listening to,” a friend from Brooklyn commented on a series I posted of some two-toned flowers that looked like the faces of newborn kittens with their eyes scrunched tight.

Sometimes the photos instigate a little botanical crowdsourcing. The weekend after Thanksgiving, I put up some photos from a walk with my husband. We didn’t know what the heathery bushes on the fringe of a playground were, and were flummoxed by the (somewhat creepy) red seed pods packed together in the shape of a heart.

But another journalist identified a purple thistle and some udo — which look like a cousin of the dandelion — while my mother spotted the susuki grass familiar from her childhood.

As we await spring, seeking out floral beauty can feel a bit like a treasure hunt. Sometimes, I have to get really close before I see what is there.

The other day, I passed a small park where it looked from a distance as if most of the trees were still bare. But upon closer inspection, I discovered that one tree was already sprouting tiny sprigs of white, pinhead-size blossoms. The large, rubbery leaves on another reminded me of the tropical plants of Okinawa, where my family traveled two years ago, on a vacation that now seems impossibly distant.

I peered into the depths of the leaves, and spied a cluster of slightly furry buds, each one filled with a dozen delicate stamens. It seemed to me that what I had found was reason to hope.